Student band, Aikido Notion, on their struggles and successes 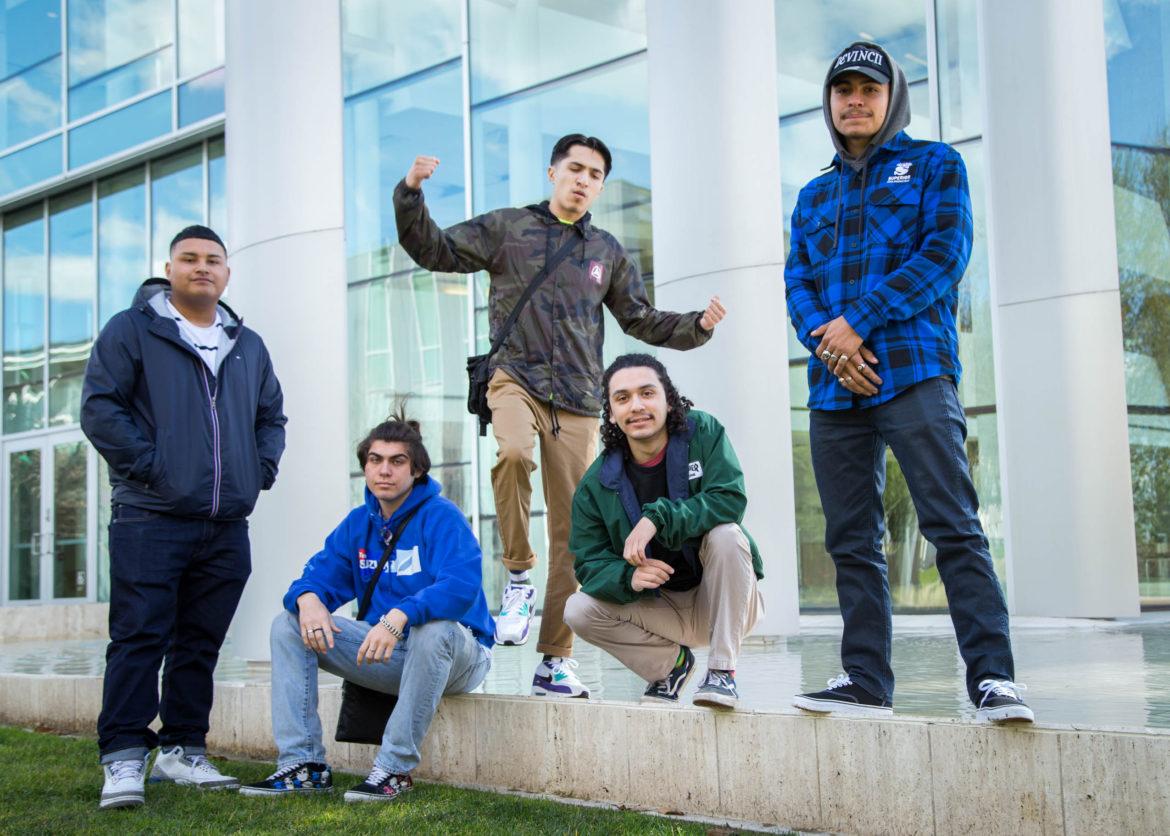 Members of Aikido Notion, a rap group from the San Fernando Valley, pose outside of the Younes and Soraya Nazarian Center for the Performing Arts on Saturday, Feb. 16. Photo credit: John Hernandez

It was 2016 and Kevin Carlos, Christian Zavala and Hector Hernandez were all sitting at a lunch table in Francis Polytechnic Senior High when they realized they wanted to create music. Three years later the trio had evolved into an eight-member collective under their own record label.

The collective gained a following through a joke that Carlos started where he said he wanted to become a SoundCloud rapper, a famous meme that became popular in 2016. His followers had waited for him to release music and so he dropped his first single, “Susin.” The release left fans wanting more and so began Aikido Notion.

They focused on creating their name, which holds a special meaning to them. Aikido is made up of three Japanese words: Ai, meaning harmony; ki, meaning energy or spirit; and do, meaning the path. The second word, Notion, means the thought of something.

The name is explained as “the way of the harmonious spirit.” The group views this concept as a balance between being at peace with life and also dealing with everything that life brings, the ups and downs.

“Even through all the chaos, I still hold onto Aikido Notion,” Zavala said.

The collective is made up of old high school friends and new friends they met in college. The trio brought in Devin Aguirre, Justin Rognlie and Inmer Zuniga. Later, they met their producer, Ethen Iraheta, in their high school’s producing class. There, Iraheta taught them how to produce their own music.

Once they graduated and entered college, Zavala met Mario “Alexander” Uribe in a Chicano/a studies speech class at CSUN. Soon after, they had their first concert together titled Project Infinity. Afterward, Uribe officially joined.

The most influential artist that inspired the collective was Joey BadA$$ because he started producing music in high school as well. Other artists that inspired Aikido Notion are Flatbush Zombies, J. Cole, Drake, Logic, Kendrick Lamar and TeamSESH.

“TeamSESH is like another group, they’re all super different and it reminds me a lot of us sometimes just how diverse we are but it all comes together,” said Aguirre.

The boys are looking to break ground and take control of their business so that they too can have creative freedom to make music.

“You have the side that people see in you and you have this internal universe inside your mind that nobody except for you knows,” explained Uribe. “How do you bring people into that world through the art, how do you let people see this universe in your head? How do you make that into a sound? Bringing that world that only exists within our heads and putting that out there so people can step into that for a minute.”

The collective researched and prepared extensively so they could find that creative freedom and be their own bosses.

In order to obtain a record label, they had to go to court to receive a business license. They traveled down to the Van Nuys courthouse to sign paperwork and take it to different people to have it approved.

Still, with a group of this size, there are obstacles Aikido Notion faces. They have not yet been able to make a song with all members present because of conflicting schedules but when they do, it’ll be a huge feat.

The members explained that when it comes to making music, a lot is lost in order to sustain the music. They have picked the music over other matters in many situations, and many bridges have been burned because of unsupportive family members and friends.

Carlos does not see this as a bad thing. “This business involves emotions, that’s the biggest struggle,” he said. “You’re involving your feelings, you’re dealing with love, anger, with lust, with pride, all within the music, even within the group.”

Creative differences also make it challenging for the group. “It’s hard to keep seven people satisfied all at once,” said Zavala, Aikido Notion’s sound engineer. “That’s the beauty of it.”

The different opinions with each artist give the music a bigger perspective and sound. Despite all of these obstacles, it does not hinder the group, as they have goals to accomplish.

The collective is now focusing on their individual art as well. They want to make their own music within the label, gaining individual exposure for each artist. There also might be a possible summer tour around the Valley. Right now it’s all about individual growth within each artist, then they will come back together to work on group projects.

Aikido Notion is motivated greatly by their fans that are made up of Valley kids from high school students and college students. Zavala recalled the moment where he greatly impacted a fan through social media post. A fan had reached out saying she would listen to their video every morning and night.

The collective is motivated by impacting their fans and making music that resonates deeply to inspire different kinds of people.