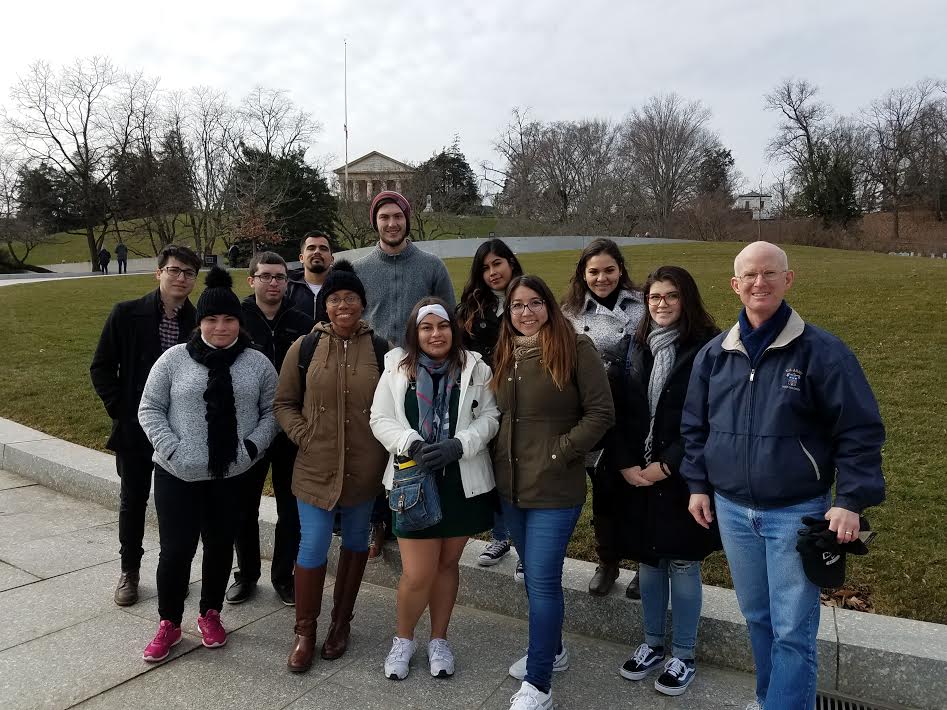 Half of the East Coast Interns at Arlington National Cemetery in Washington D.C. on Saturday, Jan. 26, 2019. Photo Credit: Sloane Bozzi

A month has passed since the CSUN in D.C. Internship Program sent 22 students to Washington, D.C. to begin their four-month internship endeavors.

As one of the interns in the program, I’m learning how to navigate life in Washington while interning and going to school. Prior to this month, I had never experienced living outside of my parents’ home, let alone living outside of California. Before you ask, yes, I am freezing out here.

Besides the occasional 22-degree weather, the transition into life in Washington has been easier than I thought. I was ready to be filled with feelings of homesickness and trouble living outside of my parents’ house. I lucked out and have yet to be homesick, and I get along great with my three other roommates.

What helps keep me busy is my full-time internship with Habitat for Humanity International as the U.S. Advocacy Campaign intern. I’ve had no previous experience working with an advocacy group, but I’m finding that the work fulfills my passion for affordable housing across the U.S.

I do the standard busywork that is passed off to most interns, but I also work on projects that are published to the Habitat for Humanity resource site. The office culture is fairly laid-back, and I feel comfortable in the office setting so far.

After work on Mondays and Thursdays, the CSUN students convene in the classroom. We take a course on the history and culture of Washington, which gives us additional perspective as we set out to sightsee. The other class stresses the importance of professionalism, and guest speakers come in on a weekly basis to give us insight into how they paved their own career paths.

These days are also when I get to see the other CSUN students, the built-in network of friends that the CSUN in D.C. program provided me with. Everyone gets along well, and on weekends we have Nintendo Switch tournaments and go sightseeing together.

The group isn’t just made up of just political science students. Chicano/a studies, Spanish, anthropology and journalism majors are representing their respective colleges from CSUN.

Andrea Mayorga is an anthropology major, and an intern with the Smithsonian Center for Folklife and Cultural Heritage. She helps her supervisor manage a virtual internship based on the Appalachian region.

Because she’s the only anthropology major in the program this semester, she’s occasionally found it difficult to find people who relate to her interests.

“It’s weird not being able to geek out over cultural aspects of this city,” said Mayorga. “I’ve found that political science majors have pretty strong communication skills, so it’s nice being able to have a great conversation.”

The city does have a distinct culture. Most of Washington’s residents work for the government and commute to Capitol Hill or in the neighboring downtown district.

“It’s been interesting to observe the differences in how people behave here versus at home,” said Melanie Cohen, a political science major. “This is definitely a serious town.”

Cohen is interning with the American Israel Public Affairs Committee, a lobbying group that advocates pro-Israel policies to Congress.

“I like how it is very small but at the same time it doesn’t feel like you’re in a small town,” said Cohen. “It’s super easy to get around.”

Some interns have the privilege of getting to experience working alongside the freshmen of the 116th Congress.

Marcy Banuelos, a Chicano/a studies and Spanish major, is an intern with Rep. Nanette Barragán (D-CA). Banuelos has experienced the demand representatives are under to please their constituents in a polarized political climate.

“I think it’s extremely rewarding because you get calls from people who are grateful for the work that they’re doing,” said Banuelos. “Congresswoman Barragán has been able to change lives which I think is impactful.”

Raquel Velazco and Raymond Acevedo, both political science majors, are interns with the CHC Bold PAC. The Democratic Political Action Committee is trying to increase the amount of diversity in the House and Senate.

“We work with a lot of congress members and we help them fundraise,” said Velazco. “It’s been really cool to sit in on their meetings, and you get to see politics in action and the behind the scenes work.”

“We see so many congresspeople daily,” said Acevedo. “You definitely can’t get something like that back home.”

The first month of the spring 2019 CSUN in D.C. program has come to an end, and in such a short amount of time, every student has made an impact in their respective offices and organizations. We will continue to network and explore, and bring even more success stories back to Northridge in May.