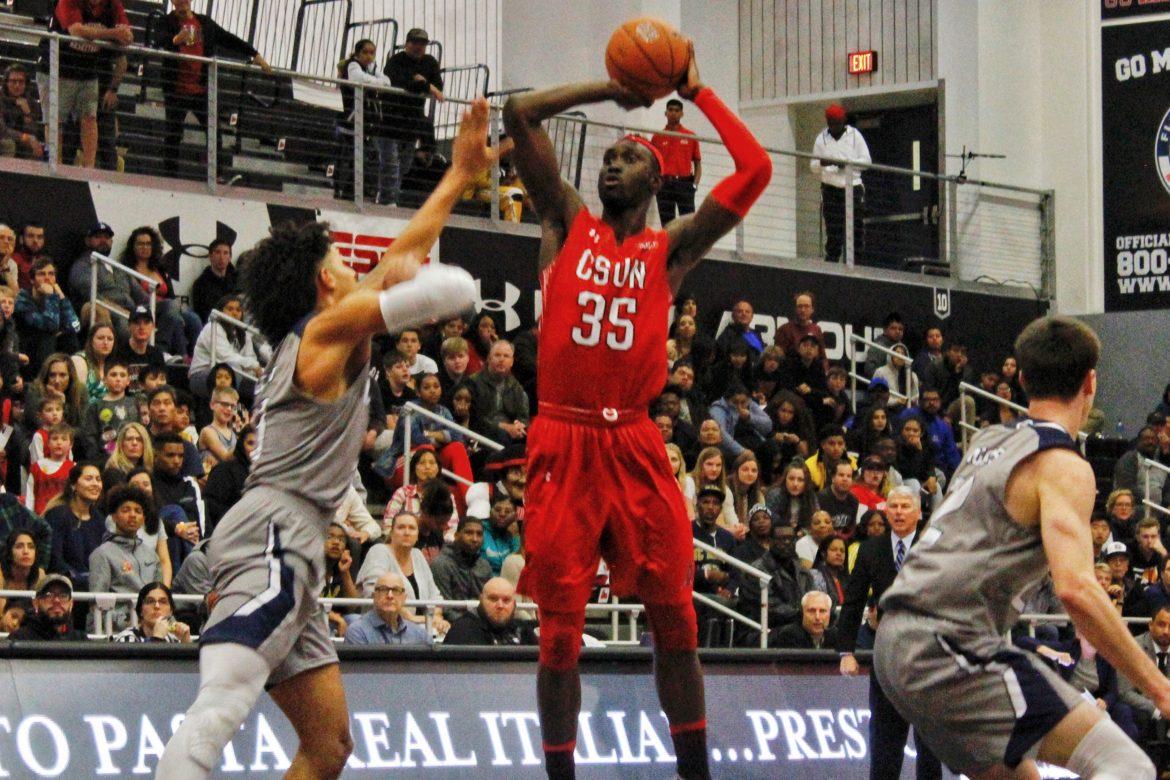 On a night where Lamine Diane broke the single-season record for both points scored and field goals made in a season, the men’s basketball team endured an intense game against UC Davis, coming away with an 81-76 overtime win over the Aggies Saturday night at the Matadome.

The redshirt freshman tied the previous record of 267 field goals, set by George Robnett in the 1973-74 season, with a dunk with 2:45 left to go in the first half and then set the new record with 14:21 to go in the second half on a layup.

Diane would finish the game with a game-high 35 points on 9-18 shooting to give him 272 field goals made and 655 points scored so far this season, two records that he will continue to reset every game that he plays in from here on out.

“I think every team has tried one way or another to double him or figure out ways to keep him from scoring and it’s hard for them,” Mark Gottfried, head coach, said about Diane’s performances this year becoming almost commonplace. “(But) you have to remember, we all forget that he’s still just a freshman and it’s his first year to play Division I basketball, so he’s just been terrific.”

Of course, there was a game surrounding the drama that was Diane’s record-breaking performance and what a game it was.

A hotly contested battle that, at times, had a playoff-like atmosphere brewing at the Matadome, the win certainly helped the Matadors in their push to rise up in the conference standings as the Big West Tournament slowly creeps up on the calendar.

Featuring 10 ties and 11 lead changes, the game was either tied or within five points for either side for pretty much every second of regulation, with the largest lead of eight points being taken by CSUN midway through the second half.

The Aggies, though, were able to ride a 21-24 showing from the free-throw line, including 10-10 in the second half, to offset the fact that they made just 27 percent of their second half field goals to tie the game late in regulation and force overtime, though freshman Darius Brown II nearly won the game as the clock expired with a 3-pointer that rolled in and out.

In previous games, this team would have faltered having given up the chance to win late in the game, but this time the Matadors were poised and ready for the challenge, going 5-6 from the field, 2-2 from beyond the arc and 5-6 from the free-throw line on the way to scoring 17 points in overtime to seal the victory.

“I thought our poise was really good, but I think the characteristic I liked was our toughness,” said Gottfried. “We had the game somewhat in a position to win in regulation, but didn’t. We gave up a couple threes I thought that hurt us. We go to overtime and I thought our guys responded. They showed a lot of toughness and I thought that was the biggest point for tonight.”

Sophomore Terrell Gomez hit a couple of clutch free throws late in overtime to put the Matadors up by five points with just six seconds left in the period to effectively kill off the Aggies’ comeback bid, making everyone forget about the free throw he missed late in the loss at Long Beach on Wednesday that allowed the 49ers to win the game at the death.

“I felt like I was really supposed to make those free throws. But it’s over with,” Gomez said. “I forgot about what happened that game. It’s a new day. I know I can make free throws. I shoot them every day. I make a lot of them in a row so I just got to go up there and be clutch.”

Gomez ended up finishing with 20 points, though he got off to a slow start with just three points at halftime and going just 1-5 from the field and 1-3 from distance. However, he went 5-9 from the field the rest of the way, including 4-7 from three and 3-4 from the charity stripe, reveling in the clutch situations he was put in down the stretch.

“He’s so confident and you could tell he was playing to win, playing to win the game and that’s one thing we’ve talked about,” Gottfried said. “We’ve had some leads in other games that we haven’t closed out so we were able to close it out tonight and I thought Terrell, in overtime, was a big reason for it.”

Brown would also turn it up after halftime having put up a goose egg in the scoring column in the first half, scoring all of his nine points after the break and dishing out six assists during the duration of the game.

“Darius is a really good passer but I told him, at times, he’s a little too passive. We need him to score some more points,” Gomez said. “Two guys can’t carry a whole team against a good defensive team like UC Davis. You got to give them credit, it’s a really good defensive team. So Darius had to step up and make some shots to open it up and I think he opened it up for me when he’s being more aggressive offensively.”

Junior Rodney “Rocket” Henderson also chipped in with 15 points off the bench, providing a much-needed spark as the only player to score off the bench.

“I think when he comes off the bench, he knows he’s going to play a lot of minutes and I thought his first half was great,” Gottfried said. “He made a big shot at the start of the second half but we’re much better, obviously, when Rocket, Terrell and Lamine, all three of those guys, score the ball like they did.”

They sit in sixth place in the conference standings, the same position they held going into the game, though they have narrowed the gap with Davis in fifth to just one game and are within striking distance of Hawaii and Santa Barbara in the spots just ahead of the Aggies.

The Matadors will be at home for their next game on Wednesday, Feb. 27 at 7 p.m. against Riverside before a one-game road trip at Hawaii on Saturday, March 2 at 9 p.m.