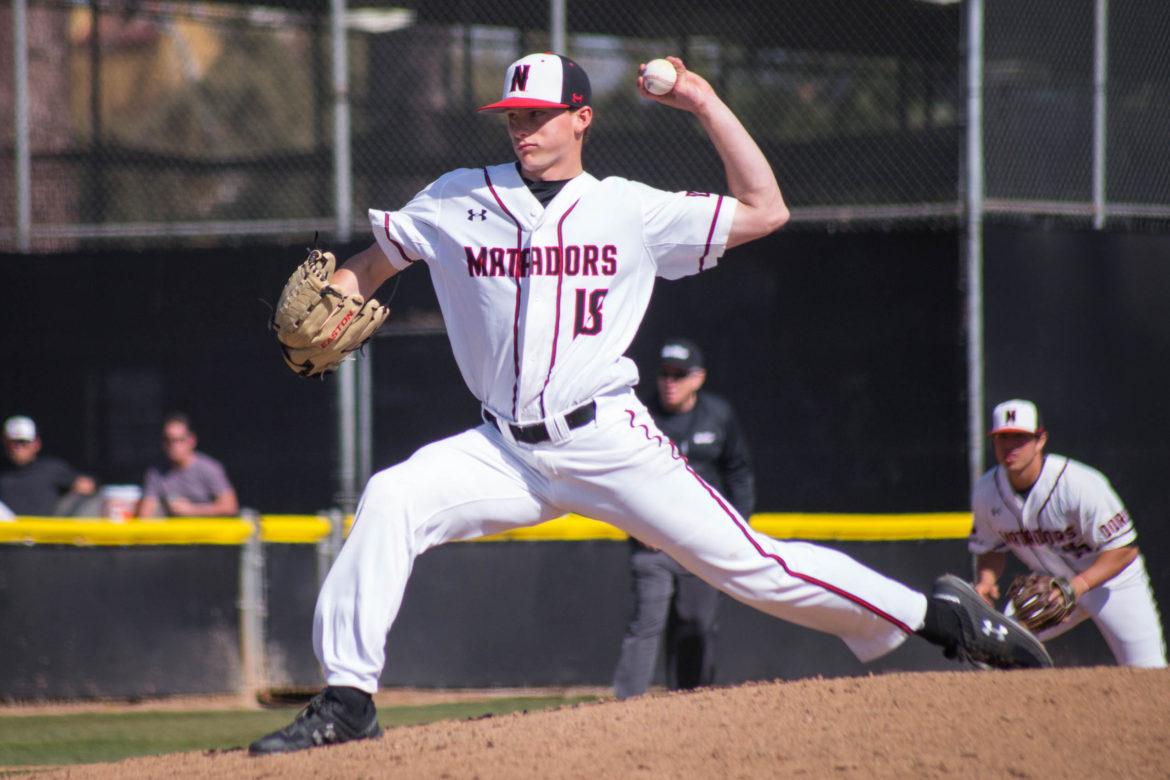 Sophomore Wesley Moore threw a two-hit shutout on Saturday to beat Gonzaga 3-0, going on to win the doubleheader on Sunday after dropping the first game on Friday, winning the series 3-1 this past weekend at Matador Field.

The first game was suspended Friday night due to darkness with the game tied 8-8 in the 12th inning and finished Saturday morning with the Bulldogs coming out victorious 10-8.

The second game of the series saw Moore take a no-hitter into the eighth inning, and though he ended up losing it, he was able to finish off the shutout and earn the 3-0 victory.

“I definitely had taken a peek at the scoreboard and realized I had a no-hitter going,” said Moore. “I wasn’t worried about the no-hitter, just kind of going deep in the game and giving my team the best chance to win. I was just going pitch by pitch.”

In the 6-5 loss to Kansas State the previous week, Moore gave up one hit, three runs and eight walks. Since that game, Moore had worked all week with head coach Greg Moore to bounce back from what happened in that game.

Coach Moore was extremely happy with the adjustments that Moore made throughout the week, highlighting his ability to trust his stuff despite the problems he faced last week.

“That’s the joy of college baseball,” said coach Moore. “You see big adjustments, big jumps week to week and then as they get into the big leagues, they adjust a little bit slower, they are smaller and more refined. Wes has command, he just had a rough week last week. I was really, really impressed and surprised by what he did.”

Sunday’s doubleheader was an offensive showcase by both teams as the Matadors came out on top 7-4 in the morning game and 15-12 in eight innings in the afternoon contest. In both games, the Matadors trailed at the beginning, never having led a game first this season.

The Bulldogs ran out to an early 3-0 lead in the first game before the Matadors tied it up in the second inning. In the third, fourth and fifth innings, the Matadors continued putting up runs while giving up just one the rest of the way in the victory.

In the second game, freshman Andrew Lucas hit a home run to left field to tie the game at two in the bottom of the second. However, the Matadors were down 6-2 until they exploded in the fifth inning with four home runs to go ahead by one run.

Sophomore Brandon Bohning and senior Kyle Barret hit back-to-back bombs, Jayson Newman hit a two-run shot to left and sophomore Victor Cerny followed with his own solo shot to give the Matadors a 7-6 lead.

The Matadors would add another four runs to that total to bring their lead to 11-6 after a nine-run fifth inning.

“They got a couple good pitches to hit. Sometimes, it just all lined up and it did in the fifth inning,” said coach Moore. “They got some good pitches, they got them up in the air. I don’t expect that to happen too often but I did challenge them to score 10 next time.”

The game was called in the middle of the eighth inning with the score 15-12 in favor of the Matadors. Prior to the game beginning, the Bulldogs set a 5:15 p.m. travel curfew to catch their flight back.

The next game is at Matador Field against the nationally-ranked UCLA Bruins on Tuesday, Feb. 26 at 2 p.m. before hosting the University of Michigan Wolverines March 1-3.