‘Psychiatry: An Industry of Death’: An intriguing, but skewed exhibit 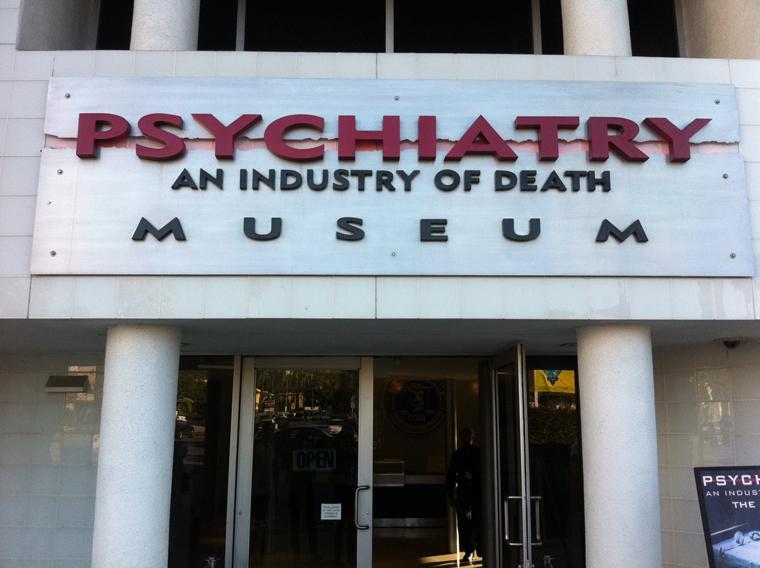 Psychiatrists are responsible for mass murder, eugenics, 9/11, the deaths of countless celebrities and the proliferation of school shootings. They are the most criminal of all professions and the least fit to treat mental health.

These and other equally extreme messages and impressions are what attendees of the museum of Psychiatry: An Industry of Death will encounter.

That the museum was co-founded by a Scientology front group — Citizens Commission on Human Rights — should not be surprising. Though there is no mention of the Church of Scientology anywhere, it is supremely ironic that the museum so thoroughly documents human rights abuses given Scientology’s own well-documented abuses.

The “allure” of the museum is that it presents an intellectual enigma that students of psychology, philosophy, history, sociology and critical thinkers alike would all enjoy parsing through. For the informed visitor, the museum presents something of a critical thinking challenge: you are presented with factual information with alternative facts weaved in to lead you to a singular conclusion — that psychiatrists are apparently out to get us, all of us!

And this anti-psychiatry/psychology propaganda manipulates opinion on multiple levels. First, the museum uses perceptual cues to persuade us that psychiatrists are nefarious — and always have been.

Upon reception by some “low-key” and uppity Scientologist guides, visitors are literally put into a padded room where they watch the first of a series of sensational videos. The videos employ the standard, dramatic, hoarse narrator that lends the information a sensationalized, conspiratorial tone.

We are told that deaths due to psychiatry total some 1.1 million, a figure that is allegedly more than all the American casualties of war combined. Of course, no sources are given with these numbers.

The problem with the museum isn’t that it criticizes the very real issues that modern psychiatry and psychiatric medication present. As Peter C. Gøtzsche, a Danish professor of psychiatry, estimates, “Psychiatric drugs are responsible for the deaths of more than half a million people aged 65 and older each year in the Western world.”

No, the problem is that the museum bashes attendees over the head with its sensationalism and an extremely skewed perspective that undermines its valid critiques of psychiatry and psychiatric medication, which often get dismissed by visitors.

There are some valid issues that the museum exhibits, but it always does so with the intent to utterly vilify the profession and modern practices of psychiatrists.

Take for example their exhibit on the evolution of the Diagnostic and Statistical Manual of Mental Disorders, the standard resource for clinicians to diagnose mental illness. That this latest edition, the DSM-5, contains 297 disorders represents not a deeper understanding of the human psyche and its pathologies, but rather a nearly complete fabrication to the founders of the museum.

The language of the exhibit is sensational and universalizing: the expansion of the DSM is categorically dismissed as nothing more than the proliferation of “fictional” disorders, concocted by money-hungry psychiatrists and Big Pharma.

Again, the museum points us to a very concerning issue: Why are so many people now diagnosed with mental illness? Robin S. Rosenberg in her article “Abnormal Is the New Normal” provides us with a couple reasons: “We’ve gotten better at detecting mental illness and doing so earlier in the course of the illness” and “we really are getting ‘sicker’ … More of us are mentally ill than in previous generations, and our mental illness is manifesting at earlier points in our lives.”

Instead of fostering a real conversation about causes or proposing alternative solutions, the museum merely resorts to the infantile logic that all of these disorders have been made up by pseudo-scientists.

As the museum continues to wind its way through the ugly history of medicine and psychiatry, it becomes more and more conspiratorial and the connections it makes become looser.

We are poignantly presented with a wall of celebs that were on psychiatric medications: Robin Williams; Sylvia Plath; Ernest Hemingway; Heath Ledger. In the midst of the portraits is a tombstone with a plaque, reading “Creativity.”

Psychiatry is to blame for the deaths — the murders — of our brightest stars. The association is that each of these troubled talents was the victim of psychiatry and that it was the drugs that did them in. The implication is that they would be alive and well if not for psychiatry.

Tying in with its Hollywood location, the exhibit is meant to appeal to our love of celebrities. The exhibit is effective in its persuasion: the idealized images pull at our heartstrings and makes us question the use of such drugs.

While overall the museum raises critical questions on the use and effects of psychiatric medications on both children and adults, it ultimately destroys its own tenuous credibility with its extreme conspiracy theories and skewed slander of mental health professionals.

Ironically, the carefully crafted exhibits attempt to do the very thing they criticize: psychological manipulation of individuals. And that the Church of Scientology, of all organizations, funds such a mental health watchdog to safeguard human rights is the epitome of hypocrisy.

The sensationalized propaganda ironically alienates many of the critical and curious visitors that it seeks to condition. Still, there’s fun to be had for critical thinkers to go through it, picking apart the truth from the lies.