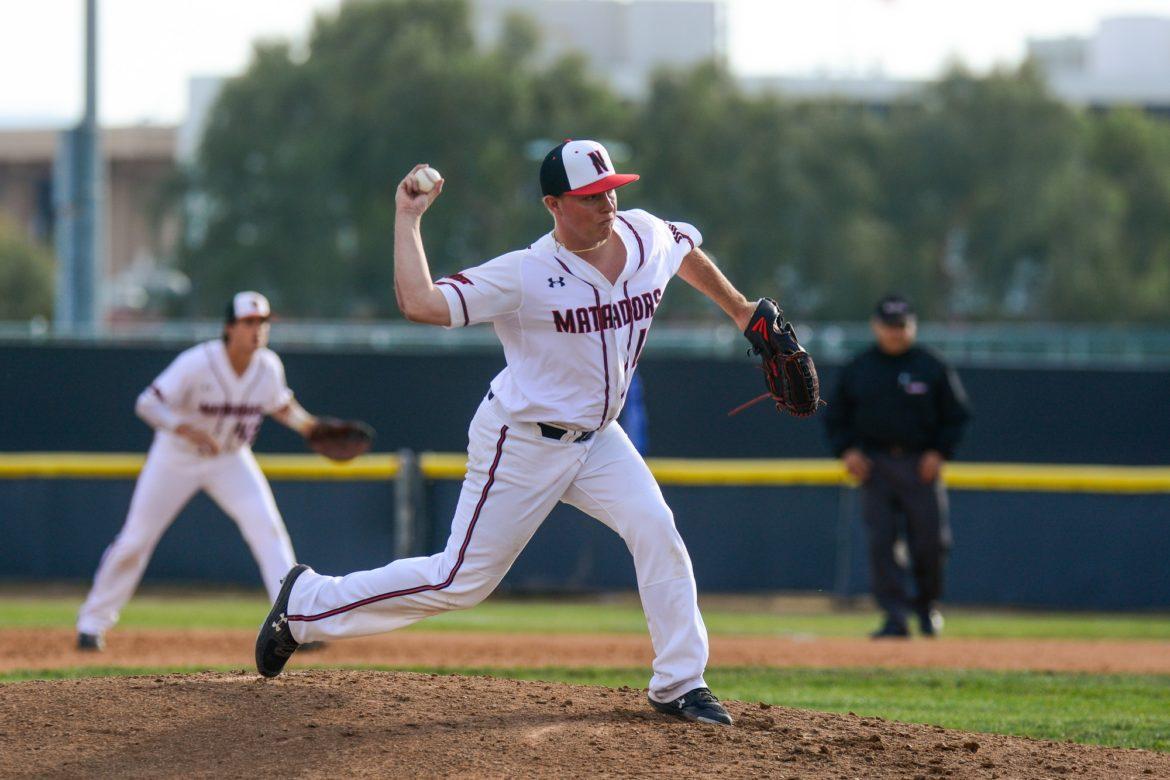 The baseball team nearly came away with an upset over No. 3 UCLA, but a defensive mistake by the Matadors led to the Bruins winning 4-3 Tuesday afternoon at Matador Field.

The Bruins found themselves ahead 2-0 in the third inning after freshman Matt McLain hit a 2-run single off of senior Jackson Cunningham, who had just been brought into the game to relieve starting pitcher Cassius Hamm after the redshirt senior walked the bases loaded.

The Matadors, though, would take the lead after a 3-run sixth inning.

Catcher Sean Skelly brought home the first run on a bases-loaded single, before first baseman Wesley Ghan-Gibson was hit by a pitch, bringing home the second run of the inning. The third run came from a single by right fielder Andrew Lucas, but freshman left fielder Denzel Clarke ended the inning by grounding into a double play.

The Bruins tied the game in the seventh on a single off of freshman Blaine Traxel before taking the lead in the eighth on a defensive miscue by Skelly.

With runners on first and second and two outs, sophomore Blake Schriever threw a wild pitch that both runners attempted to take advantage of. Skelly thought he could catch the runner going to second base to end the inning but once he threw it across the diamond, the runner that had moved to third had an easy path going home, scoring UCLA’s fourth and game-winning run.

“That’s a good aggressive play by Sean,” head coach Greg Moore said. “We always say that if we are going to make mistakes, they will be aggressive mistakes. He blocked, he recovered and he took a shot at second base. I thought it was a good decision. It just didn’t go our way.”

The Matadors had a chance to tie the game in the bottom of the ninth, putting runners on first and second, but sophomore Brandon Bohning flew out to the first baseman to end the game.

Despite the result not going the way he would have wished having seen his team leading in the seventh inning, Moore was pleased with the way his players handled themselves after a tough weekend that saw the Matadors play 39 innings against Gonzaga, including 17 in a doubleheader on Sunday.

He was especially pleased with the pitchers that came in out of the bullpen, knowing that there was not a starter that could eat some innings and so he went to a new guy more often than he would in a normal game and they responded, giving up just the four runs after giving up 26 runs in the four-game series against Gonzaga.

“That’s a credit to our defense. We made some good pitches late in innings, but our defense played well,” Moore said. “Our positioning was good and their ability to play catch to get us out of a few innings was outstanding.”

Traxel was dominant in the four innings he pitched in relief, coming in to keep the Matadors from falling behind too much and though he did end up giving up the tying run in the seventh, his four-strikeout performance through the middle innings was undoubtedly the highlight of the game for the Matadors.

“We knew we knew we were going to split this game up,” Moore said about utilizing his bullpen in an unorthodox fashion. “The ‘pen did a nice job. Blaine Traxel came in and steadied that game in the middle. It’s fun to see a freshman do that.”

Sophomore Brandon Bohning had another stellar performance, going 2-5 with a run scored, his seventh multi-hit performance in nine games, while Lucas and junior Angelo Bortolin both reached base, making them the only players on the team to do so in each of the nine games so far this season.

But beside those highlights, the offense as a whole looked somewhat lackluster, leaving eight runners on base against UCLA after putting up 33 runs over the weekend. But Moore liked what he saw and felt that his team put together some quality at-bats, proving that they can compete with a nationally ranked team such as the Bruins.

“We played pretty good baseball today. I thought we played catch well, we pitched at times and had some good at bats,” Moore said. “We do our best to separate from the opponent and just play ‘Dors ball, our brand of baseball.”

After the loss, the Matadors record sits at 5-4.

They welcome another nationally ranked opponent in the form of the University of Michigan to Matador Field this weekend for a three-game series.

The Wolverines have gotten off to a blazing start, winning each of their first six games by a combined score of 44-10.