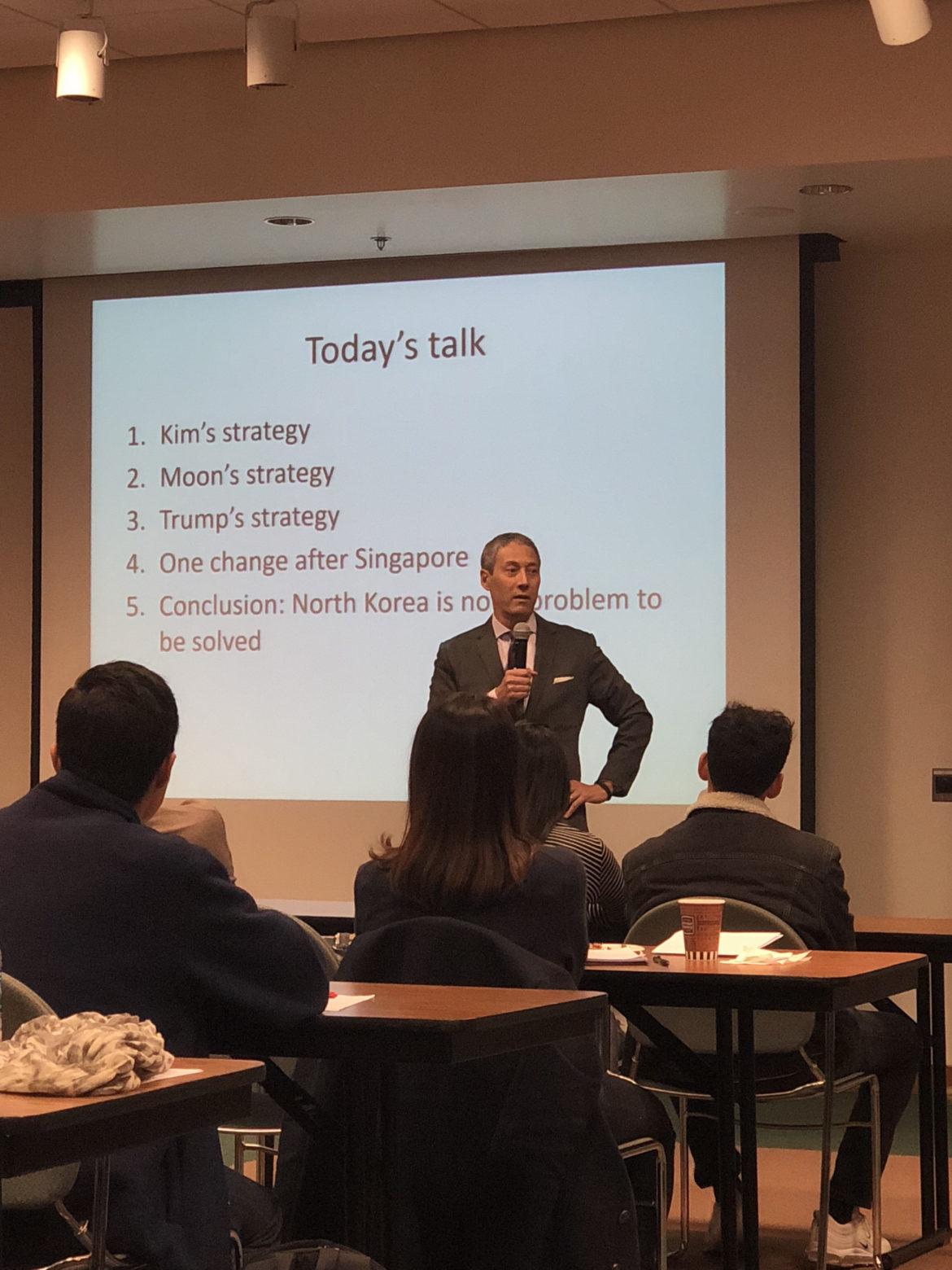 Dr. David Kang discusses North Korea-US-South Korea diplomacy in the Ferman Presentation Room inside the Oviatt Library on Feb. 7. Kang also spoke about why it is unlikely that the US will go to war with North Korea.

Contrary to different narratives that have played out in the news media, the cost of war between North Korea and the United States would be too high, said a scholar of the University of Southern California during his guest lecture.

Dr. David Kang, the director of the Korean Studies Institute at USC, shared a fresh perspective which he claims has defined his intellectual career: “North Koreans aren’t crazy … and they are not going to invade.”

A key point in Kang’s lecture centered around the argument that deterrence is a strategy that works, as each side is aware that the costs of war are too high. He explained that both countries, North Korea and the United States, engage in deterrence games by using tactics such as muscle flexing or name-calling, among others.

Kang went on to discuss America’s strategy in cultivating a better relationship with North Korea over the decades, arguing that it fundamentally has not changed — even under the Trump administration. He then expanded on different strategies implemented by North and South Korea to strengthen their relations, reiterating that it remains unknown if America has a concrete plan to follow suit.

Kang also shed light on the various stereotypes about Koreans with the showing of sensational headlines on the screen, alluding to the idea that we project our “fantasies” onto others because of constant exposure to today’s 24-hour news cycle.

He shared that North Korea is widely viewed as a threat that needs to go away, but after 70 years, not much has changed within its borders. Kang believes this is something we must adapt to.

“North Korea is not a problem to be solved … It’s a real country, with real people,” he said. “The hardest thing we have (with) North Korea, is to view it as a shared common humanity, as a people.”

Images featuring different parts of Korean culture that many in the west may find humorous were then showed on screen. These stereotypes are due to second-hand exposure via different forms of media, Kang explained.

“They don’t know that they’re weird. They don’t know that this is bizarre,” he said. “These are little children who were born and growing up in a certain country. Partly, I am telling you a humanistic thing which I want you just to understand, a shared common humanity with North Korean people.”

“They didn’t choose to be born in North Korea,” he continued. “They didn’t ask to live there, any more than you asked (to live here).”

To make good policy Kang said we must understand why North Korea is not collapsing as predicted, and why it won’t happen in the future. His solution to working towards a stronger relationship with North Korea is to stop the name-calling and to open trade.

“It’s a very American thing. Capitalism is what makes America great,” he said.