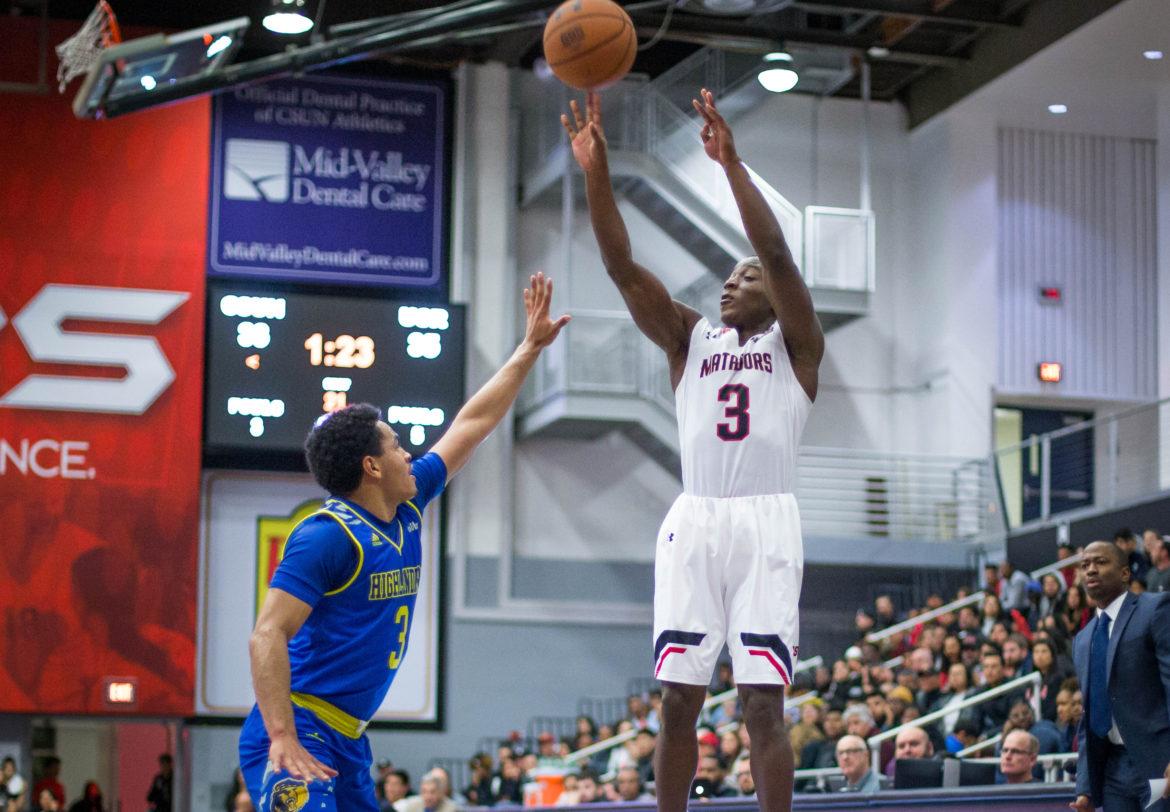 Sophomore Terrell Gomez shooting a 3-pointer in the win over Riverside on Wednesday at The Matadome. Gomez broke the record for threes made in a season in CSUN history before making the game-winning jumper to beat the Highlaners, 70-68. Photo credit: John Hernandez

Sophomore Terrell Gomez hit a jumper with two seconds left in the game as the men’s basketball team beat Riverside 70-68 Wednesday night at the Matadome. The game that also saw Gomez break the record for 3-pointers made in a single season in CSUN history.

“It’s a blessing. Now I’m in the record book forever,” Gomez said. “You know, being in the CSUN hall of fame as far as, you know, breaking records and stuff like that is pretty amazing. It’s humbling … but there’s no ceiling, so I’m just going to try to make as many more as I can and continue to produce.”

Coming into the game, Gomez was just one shy of the record and he tied it with 14:24 to go in the first half. He went on to set the new record about three and a half minutes later, passing Kyle Kerlegan’s mark of 98 set in the 1990-91 season. He finished with a game-high 24 points on 4-11 shooting from deep to give him 101 threes made on the year, adding four assists along the way.

“I’ve had some good (shooters that I’ve coached),” head coach Mark Gottfried said. “I had a guy named Scott Wood at NC State that became the third-leading 3-point shooter in the history of the ACC. But I would put Terrell right up there with any of them. I think when he’s open and he has a good look at it, the ball’s going to be in his hands and I have as much confidence in him shooting the ball as anybody I’ve ever coached.”

It was another close affair that could have gone either way for the second straight game after the Matadors beat UC Davis in overtime on Saturday, with this one featuring eight ties and 19 lead changes throughout the game.

The Matadors held their biggest lead of seven points with 6:17 to go in the second half after Gomez’s 3-pointer put his team up 62-55. However, the Highlanders would end up tying the game at 68 with a little over a minute to go.

Junior Mahamadou Kaba-Camara had one of the biggest plays of his career after freshman Darius Brown II missed a 3-pointer, blocking Riverside’s Dikyembe Martin’s shot at the rim for his fourth block of the game.

Redshirt freshman Lamine Diane grabbed the loose ball and brought it quickly across the half court line before Gottfried called a timeout with eight seconds to go to draw up one last play.

When play resumed, Gomez got the ball in the left corner and dribbled inside before pulling up from about 15 feet, sinking the jumper to put CSUN up 70-68 with two seconds left in the game.

“We wanted to get the ball to Terrell because, obviously, he can make a tough shot, but also if he gets fouled, he’s the best foul shooter too,” Gottfried said. “So you want to have the best foul shooter, the ball in his hands and we just executed the play really well. Kaba set a great screen, Darius made a great pass and that’s the way to run it.”

Riverside’s DJ McDonald threw up a prayer from beyond half court in a bid to win the game, but the shot hit off the backboard and the Matadors came away victorious for their second straight win, clinching a spot in the Big West Tournament after missing out on last year’s contest and a sweep of the Highlanders for the second time in three years.

It was a team effort that allowed the Matadors to get the win, with everyone doing their part to ensure a positive result and it seems as if the team is coming together at the right time with just three games left in the regular season.

Kaba-Camara had his best game of the year in his first action since Jan. 19 against UC Irvine, getting two points and a steal to go along with his four blocked shots, all of that coming in the second half, denying the Highlanders’ big men the easy shots inside the paint that they had been getting before he entered the game.

“I thought he gave us a great lift,” said Gottfried. “Four blocked shots in the second half, I thought those were big. He changed the game.”

Diane got his 17th double-double of the season, recording 22 points and 12 rebounds, also blocking two shots to tie the single-season record for most blocks in a season, tying Tre Hale-Edmerson’s mark of 62 set in the 2013-14 season.

Brown also chipped in with six points, five rebounds and five assists while turning the ball over just once as he controlled the tempo of the game whenever he had the ball.

“I thought it was a win where we had overcome a lot,” Gottfried said about this being a “team win.” “We didn’t shoot the ball very well, didn’t defend very well. But we hung in there and found a way to win and sometimes you got to win an ugly game.”

Their conference record is 6-7, good for sixth in the Big West standings and just a half game back of UC Davis in fifth. It also means that they will be participating in the Big West Tournament for the first time since the 2016-17 season after missing it last year by one game.

The Matadors also doubled their conference win total from last year, and with three games remaining in the conference schedule, if they win out they could end up with their most wins in conference play since the 2010-11 season when they also won nine games.

The Matadors head to Honolulu for their next game against the Hawaii, who sit just one game ahead of them in the conference standings in fourth place at 7-6.

Matadors and Rainbow Warriors tips off at 10 p.m. PST on Saturday, March 2 on Big West.TV.