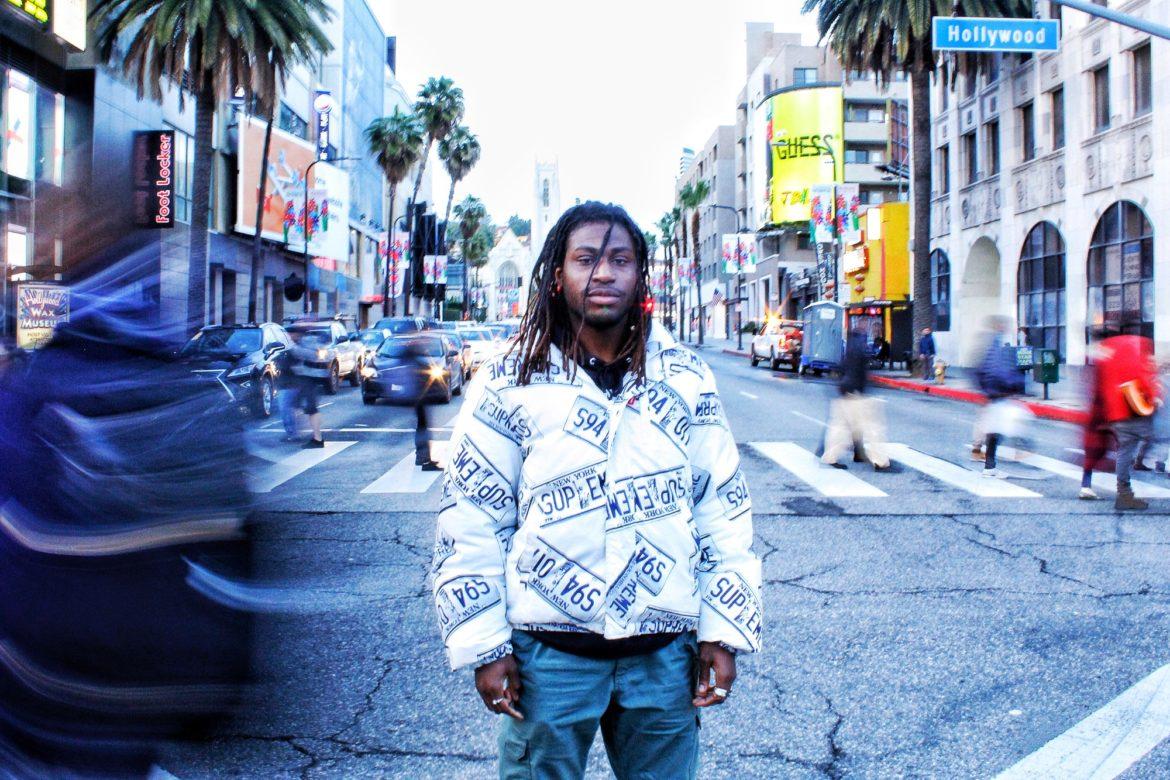 Akinfolarin Ajileye, aka Holden Black, is a 22-year-old CSUN student who makes hip-hop and R&B music and is looking to make his music heard on campus. “The aura of Hollywood and its offerings have influenced both my own personal style and the stylings of the music I make,” Black said. Photo credit: Elijah Carr

A senior at CSUN has released his second hip-hop project in hopes of spreading his message of positivity on Friday, Feb. 22.

Akinfolarin Ajileye, who goes by Holden Black, had a unique upbringing. He went from being captain of his high school track team to being put in the back of a police car, then to modeling and now becoming a musician.

Born in London, Black moved to the San Fernando Valley and shortly after he began regularly visiting family in Nigeria. It was there where he got his first taste of Fela Kuti, a major influence on his work.

“The last night I was there, I was on my (way) back to the crib catching an Uber, and I felt sketch about it,” said Black. “But while he was taking me back to the crib he just threw on some Fela, and it was a complete eye-opening vibe, just cruising through the streets of Nigeria and seeing people working and being active in their daily vibes while listening to him.”

Black cited how Kuti’s message of independence is vital to the message he portrays in his own music, along with people in the United States.

Black’s moniker came from two different places. “Holden” is a reference to the main character in J.D. Salinger’s novel “Catcher in the Rye.” Black identifies with Holden’s nonchalant attitude where “things will figure themselves out.” The last name “Black” comes from his cultural pride.

“That’s one thing I got to stand for and represent, sometimes in the current day and age a lot of African-American artists might not stand (up for) what they believe in but that’s something I want to represent about growing up here and being Nigerian to the world,” he explained.

In high school, he was captain of the track team for two years. During this time, when he was 15, he and one of his teammates had shoplifted candy and snacks to sell at school for less than two months. What would’ve been a smack on the wrist escalated when his teammate attempted to run away and the police were involved, ending with Black at the police station. Although he was not involved during that event, he was brought into the police station as an accomplice.

That was the moment Black left petty theft behind to focus on sports and high school. Once he began attending CSUN in 2014, he found his self interested in creative edeavors and was also introduce into modeling. He would eventually transition from modeling into music, as he used the skills he had gained, networking and his own personal style, to help with his new artistry.

Black has performed at a number of venues, but his most memorable performances was at a Frat Party at the University of Southern California.

“I was rocking the mic back and forth and this dude in a diaper came out and started rocking with me,” he recalled. “It was crazy but I didn’t miss a step.”

One of the last venues he performed at was a strip club in Hollywood called Crazy Girls, where about 20 supporters showed up. Black has opened for Waka Flocka Flame and performed at the Pandora Music Stage, but he’s faced struggles getting CSUN to promote his music.

After not being invited to perform at last year’s Sol Fest, he has decided to take matters into his own hands, always looking for opportunities to perform and reach new audiences.

Mike Rose is a collaborator on both of Black’s albums and was a part of the CSUN a capella group, Acasola. He remembered seeing Black coming to every one of their performances two years ago and witnessing him engage with the crowd with a tremendous amount of energy.

A couple of months later Black began working at the In-N-Out on Tampa Avenue, where Rose was also working. There the two were properly introduced, and Black sought his help in singing on his first project.

Rose could “hear the integrity in his work and his music,” and was inspired by his artistry. Now the duo work together, with Black having a hand in Rose’s project coming out in a few months.

Black’s new EP is called “The W.” The name was conceived after staying at the W Hollywood hotel, and inspired him “to go all out this year.”

“Go for the W’s,” Black said. “I want to inspire for my family, friends and everyone good wealth and health. Inspiring positivity isn’t just about yourself, it’s about wanting the best for the people around you too.”

Going from seeing a third world country to being in LA, Black has a unique voice, with a message of staying true to yourself and spreading positivity through his music.

“The W” is streaming on all streaming platforms, including Spotify, Apple Music and SoundCloud.

Editor’s note 3/14/19:  The story was edited to reflect a more accurate accounting of the timeline.