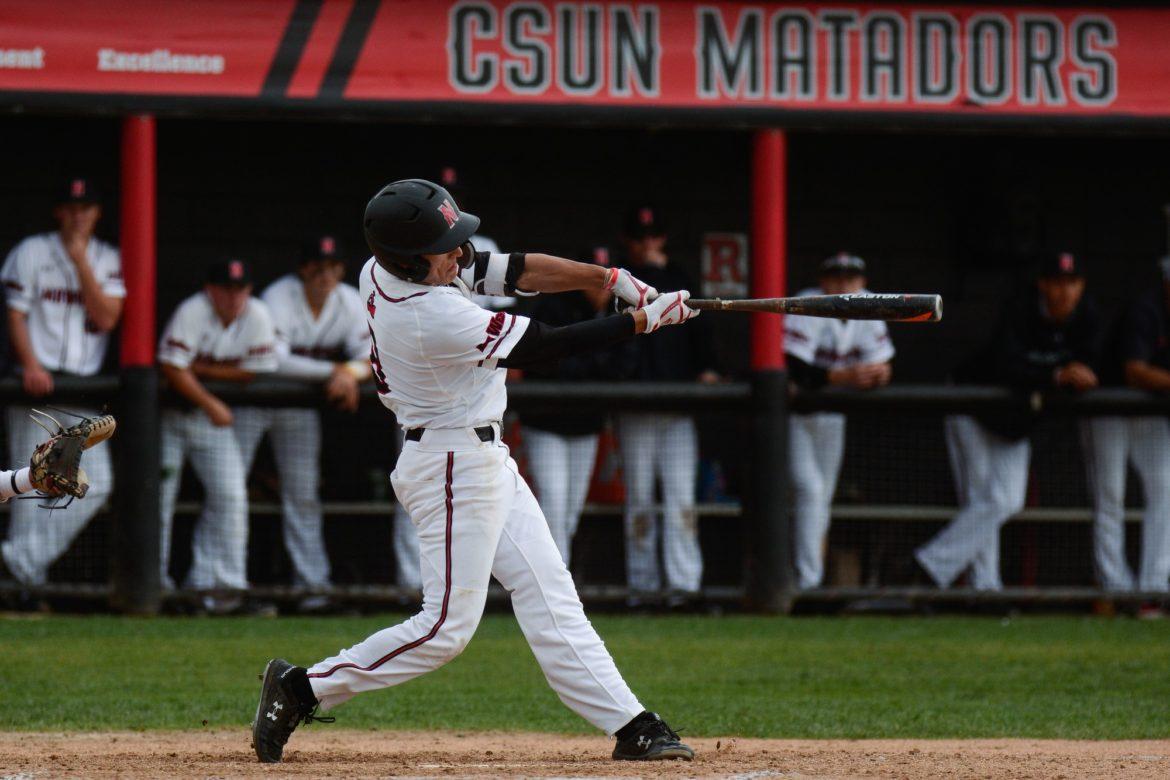 Sophomore Brandon Bohning during the 11-9 win over St John's on Tuesday at Matador Field. The Matador shortstop went 2-4 at the plate with a home run and two RBIs Photo credit: Joshua Pacheco

The Matadors beat St. John’s 11-9 for their second win in a row, pushing them over .500 as their 13-game home stand to begin the season ended Tuesday afternoon at Matador Field.

After not allowing more than four runs in any of their previous four games against UCLA and Michigan, the pitching staff was unable to keep up their phenomenal run against the Red Storm, giving up nine runs on 14 hits.

During the previous four games against the Bruins and Wolverines, the team only gave up 12 runs in total.

“We played good baseball last week; today, I didn’t think was very clean,” said head coach Greg Moore. “We missed a few signs. We didn’t execute on the mound. We are a better team than this. We need to play better.”

The bullpen struggled mightily as the Matadors went through seven pitchers after freshman starter Blake Sodersten gave up just one run in four innings, surrendering eight runs in the remaining five innings.

“Our bullpen wasn’t very sharp today,” said Moore. “We came out and didn’t land our second pitch for strikes. We’ll get better at that. Other than that, I liked the offense. The offensive resiliency today, they bounced back each time. We gave up a run and it seemed that we scored two.”

The offense got going in the third inning after junior Robert Bullard’s single and sophomore Brandon Bohning’s 2-run homerun, his fourth of the year, put the Matadors up early. The rest of the dugout got into the action from there and scored in each successive inning, bringing the total to 11 by the end of the eighth.

“I’m never thinking about home runs,” said Bohning. “I think ‘just stick to my approach, stay up the middle, and then just react to fastballs in.’ I think that was a fastball in, so I kind of just went with it, nice, easy swing that was fortunate enough to go out.”

“I think it is huge that Rob (Bullard) and I are productive at the top of the lineup,” said Bohning. “We’ve got to get on teams early and put them away early. So it’s nice that we could finally put up the first two runs in the third and then from there, the whole dugout got going, and then the team started having productive at bats.”

After the single from the third inning that started the offense, Bullard finished 2-3 at the plate with three runs scored and two stolen bases.

“Robert (Bullard) is the catalyst of our team and it’s not just that he’s productive at the top of the lineup,” said Moore. “It’s that he gets better as the game goes on. Very few players have the knack to see the game, slow the game down as they get into the seventh, eighth and ninth; he’s very good at that. He seems to be more productive late because he understands how he’s being pitched.”

Outside of the pitching and offense, the Matadors were good on the defensive end despite the 14 hits and nine runs given up, something St. John’s could not say after committing five errors throughout the game.

“I thought we played good defense,” Moore said. “That was the bright spot of today’s game. We get a win but we need to play better baseball than this.”

The team travels to Pullman, Washington to play a three-game series this weekend against the Washington State Cougars before coming home for one game to play the San Diego State Aztecs at Matador Field on Tuesday, March 12 at 3 p.m.