Back to the basics of civilty, an attempt at constructive discussion in politics 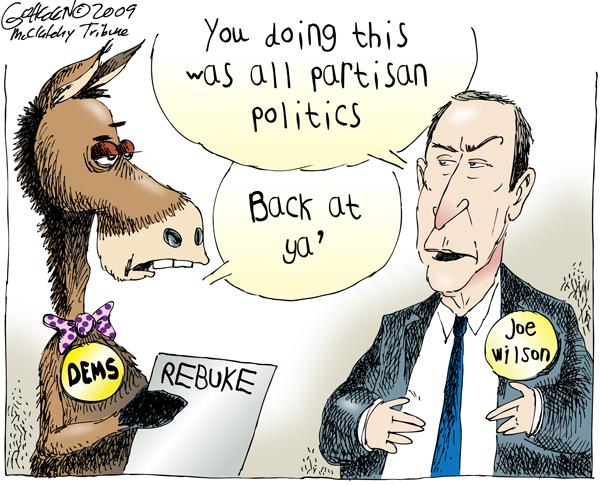 On Wednesday, Sept. 9, as President Obama was giving his health care address to both sessions of Congress, Congressman Joe Wilson, Republican from South Carolina,  shouted, “You lie,” when President Obama denied that health care legislation would provide free coverage for illegal aliens.

Biology major, Dania Diaz, a 21-year-old senior at CSUN said, “I was in the bedroom studying, when I heard him say, ‘You lie.’ I was surprised. I would have expected it at a town hall meeting, but not in the Congress or directed at the president.”

In June 2004, then Vice President Dick Cheney, told Democratic Senator Patrick Leahy of Vermont to “Go f— yourself,” on the Senate floor.

What has happened to civility in this country, and particularly in the houses of Congress?  Let’s get back to the basics of civility.

Civility is defined by Webster’s dictionary as a polite act of expression. We can express ourselves, but we can do it politely.

As President Obama said on 60 Minutes, Sunday, Sept. 13:
“One of the things I’m trying to figure out is, how can we make sure that civility is interesting. And, you know, hopefully, I will be a good model for the fact that, you know, you don’t have to yell and holler to make your point, and to be passionate about your position.”

Dr. Kephart went on to say, “We are all on the same stream, just standing on different banks. It is only through civility and deliberation that we can iron out our problems and come to a solution agreeable to both parties.”

If civility is the environment, then deliberation is the mechanism for opposing parties working together to solve the problems of our society.

According to the Web site  of the Center for Public Deliberation at Colorado State University, deliberation is an approach to politics where citizens come together and consider facts and values from multiple points of view. It’s where they take these varying points of view and seek some conclusion for action in the form of reasoned public judgment.

When various points of view are considered and discussed, in structured discussion and debate, the result is reasoned judgment.

Many of our current politicians are afraid to let a new idea emerge. They cling to their points of view, leaving no room for compromise or new thoughts to evolve. Our current atmosphere is so tense and so toxic, there is no room for growth or room for evolving ideas, just stubborn, resistant points of view.

Vice President Cheney stated, “…he’s (Leahy) the kind of individual who will make those kinds of charges and then come act as though he’s your best friend, and I expressed in no uncertain terms my views of his conduct and walked away.”

Let’s get back to the basics of civility and public deliberation in an attempt to solve the problems of our society.