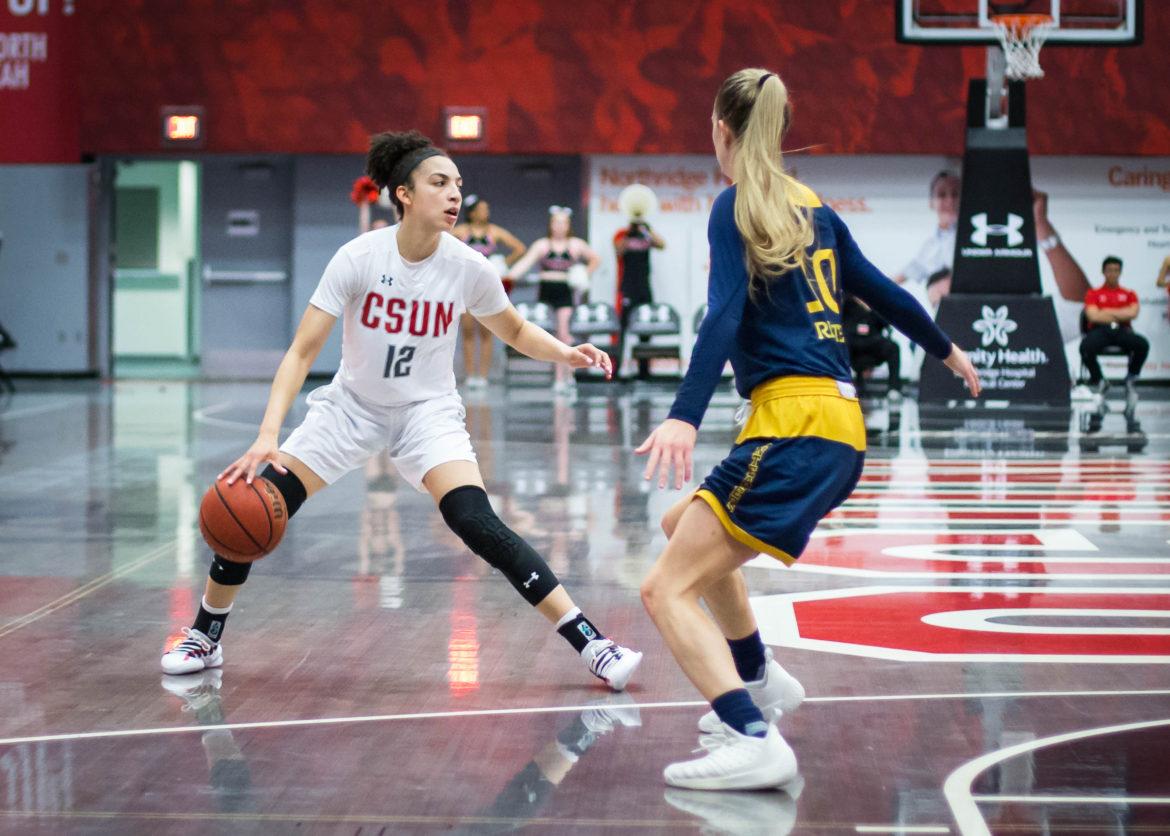 Sophomore Meghann Henderson surveys the court during the win over UC Irvine on Wednesday. The Matador guard had one of her best nights of the season, recording 11 points, four assists and five rebounds in 34 minutes off the bench. Photo credit: John Hernandez

The star senior picked up her 74th career double-double as she led the game in scoring with 21 points and rebounds with 11, with six of those coming on the offensive end.

The Anteaters took a commanding 25-14 lead by the end of the first quarter, making 7-9 3-pointers and holding the Matadors to 29 percent shooting from the field.

The Matadors, though, came storming back with an 11-0 run to start the second quarter, taking the lead at 26-25 and never looking back, closing the half with a 36-31 run to seal the victory.

“The job was to take away the 3-point line and trust everyone behind you to do their jobs,” said Fluker.

Aside from Fluker’s usual dominance, the Matadors also received lifts from junior Eliza Matthews, who recorded 10 points and seven rebounds, and sophomore Meghann Henderson, who provided 11 points, five assists and four rebounds in 34 minutes off the bench.

The Matadors defense was spectacular after the messy first period, managing to hold the Anteaters to just six points in the second and fourth quarters, marking the 10th and 11th time they have done so this season.

They also limited the threat from deep, holding Irvine to a 2-8 showing from beyond the arc in the second half after giving up eight 3-pointers in the first half.

“They did some things from a X’s and O’s standpoint that we needed to adjust to, and once we got that done, I thought we kind of settled in,” said head coach Jason Flowers.

The Matadors host Senior Day at the Matadome on Saturday, March 9 at 4 p.m. against Hawaii to close out the regular season.

“We have a lot of confidence heading into this one game,” said Henderson. “It’s Senior Night and we want to win it for the seniors.”

Currently tied in second place in the Big West conference with UC Riverside, CSUN needs to win on Saturday to secure a first round bye of the Big West Tournament’s first two rounds held in Irvine on March 12 and 13.

“I say you definitely can’t get comfortable, but we are confident in this team and we have (to do) whatever it takes to get it done,” said Fluker.

Securing second place will allow the Matadors to skip the first two rounds of the Tournament, advancing straight to the semifinals at the Honda Center in Anaheim on March 15, where they will be hoping to claim the trophy for the second year in a row and clinch an automatic bid to the NCAA Tournament.