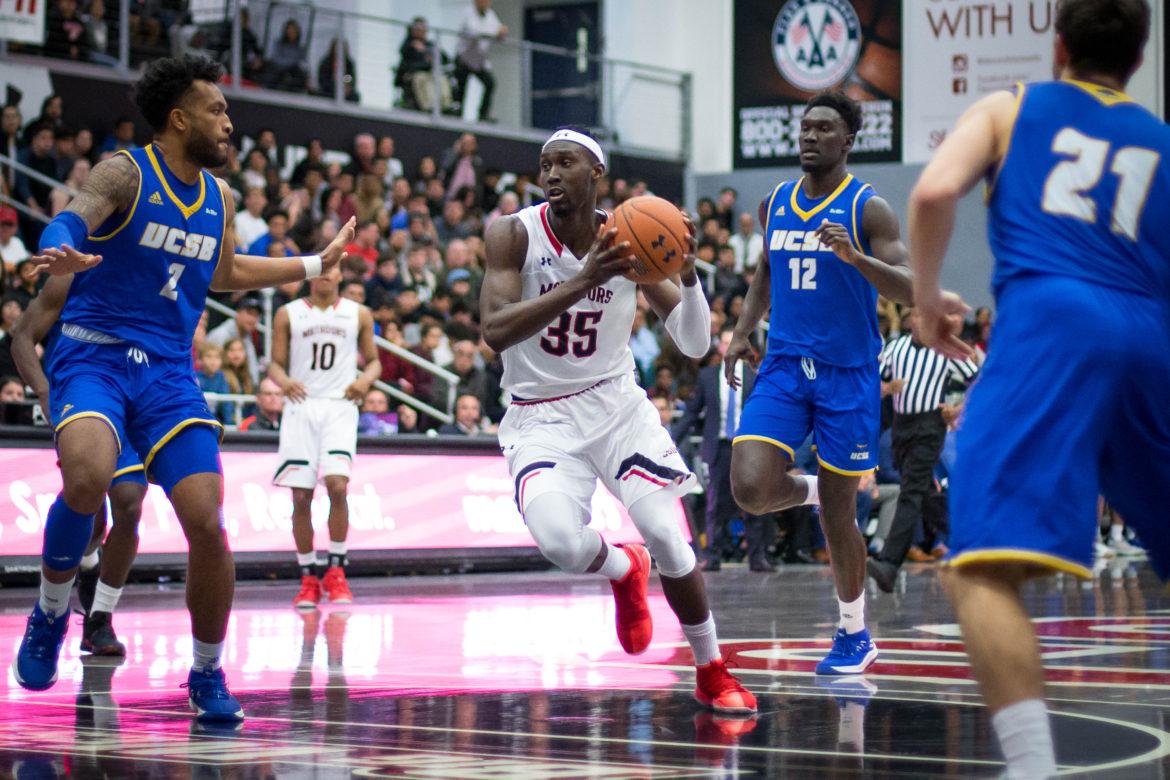 Freshman Lamine Diane drives to the basket in the loss to UC Santa Barbara Thursday night at the Matadome. Diane scored a game-high 34 points and grabbed 13 rebounds for his 18th double-double of the season, tying the record for the most in a single season in CSUN's Division I history. Photo credit: John Hernandez

Gaucho junior Max Heidegger hit a three in the dying seconds as UC Santa Barbara beat the Matadors 76-74 in their final home game of the season, spoiling Senior Night Thursday at the Matadome.

In a hotly-contested battle between two teams pushing for the third seed in the Big West Tournament, the Gauchos trailed by just one point with 30 seconds left in the game after sophomore Terrell Gomez put the Matadors in the lead with two clutch free throws, erasing a 12-point deficit.

On the ensuing possession, Gaucho guard Ar’mond Davis grabbed the rebound off his own missed layup, diving into the corner to keep the play alive before finding Heidegger wide open at the top of the arc. The junior guard didn’t hesitate, pulling up and hitting the game-winning shot with just 3.8 seconds left on the clock.

Matador head coach Mark Gottfried called a timeout to draw up one last play, but the inbound pass from graduate student Cameron Gottfried was deflected. Freshman Darius Brown II grabbed the ball just beyond half court and threw up a one-handed prayer that hit off the side of the backboard as time expired.

“It’s hard (to lose like that),” Gottfried said. “I thought our guys played really, really hard. I was proud of our team for how they competed and sometimes a game just comes down to a play, or two.”

The downfall for the Matadors in this game was their inability to crash the defensive glass, allowing the Gauchos 15 offensive rebounds on the way to recording 18 second chance points. This was due in large part to junior Mahamadou Kaba-Camara being in foul trouble for most of the game and eventually fouling out late in the second half, playing just 11 minutes after being instrumental in CSUN’s two prior victories over Riverside and Hawaii.

“We needed to get a defensive rebound and couldn’t. That was the killer,” Gottfried said. “I thought Kaba did a good job. He used his size against their kid there (Amadou Sow) — they got a really nice freshman, that big boy — I thought Kaba did well. But we were in a little bit of foul trouble, he and Ron (Artest III) both.”

Redshirt freshman Lamine Diane finished the game with a career-high 34 points in the losing effort, grabbing 13 rebounds along the way for his 18th double-double of the season, tying Brian Heinle’s record set in the 200-01 season for the most ever in a single season in CSUN’s Division I history. His efforts also pushed him into 10th place for most points scored in a single season in Big West history with 736.

Gomez finished with 21 points on 7-15 from the field and 5-11 from beyond the arc, though he scored just six in the second half as he shot the ball just four times and missed both of his attempts from deep.

With his performance, Gomez has now racked up 612 points on the year, joining Diane as the first pair of CSUN teammates to score over 600 points in the same season since Stephen Maxwell and Stephan Hicks did so in the 2013-14 season.

Both Cameron Gottfried and senior Blair Orr played their last games at the Matadome in the loss to Santa Barbara and were honored in a pre-game ceremony.

Orr, a three-year letterwinner after transferring from the University of Winnipeg, returned from injury to play four minutes after not playing since the Jan. 5 loss to Yale, getting a key defensive stop early in the first half before returning to the bench.

“All of the emotions escaped me. It was kind of euphoric,” Orr said. “I started to get the jitters about noon today, which was weird. And just thinking about, you know, it’s my last game in the gym, last game in the Matadome and once we got here, we had the place packed. And it’s never been that packed. It was just an awesome feeling, awesome energy.”

“It’s definitely something that, over the last two months, this has been the goal that I’ve just been working and working and working towards,” Orr said about finally returning from injury. “And to finally get here, once it got here, everything just kind of came back. You know, all the jitters, all the anxiety, it just went out the window. It just felt great, and playing, it just felt natural. I just had a good time.”

Currently, they hold the sixth seed in conference standings, though that could change with UC Davis tied with them, Long Beach State just half a game ahead in fifth place at 8-8 and Hawaii a full game ahead in fourth place at 8-7. Depending on how the final games play out on Saturday, CSUN could move up or down a spot.

The Matadors’ final game of the regular season is Saturday, March 9 at UC Irvine in a showdown with the conference-leading Anteaters, who put up 110 points in their win over Cal Poly on Thursday.

After that, the Big West Tournament kicks off on Thursday, March 14 in Anaheim at the Honda Center, with CSUN potentially playing on Friday and Saturday should they win each successive day.