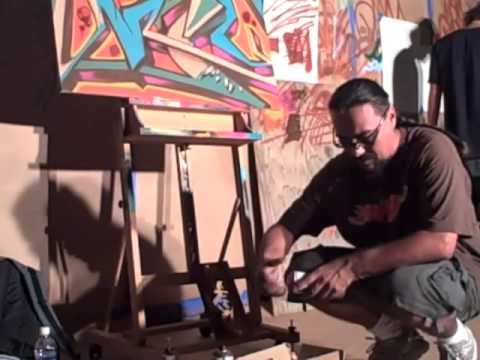 Leilani Silva, a CSUN business major, received a one of a kind birthday present when her raffle ticket was selected out of the glass jar during a CSUN Public Art Club event on Sept. 16.

An original graffiti artwork by Man One was the perfect 19th birthday surprise for Silva, who is a self- admitted “art freak.”

Silva has been studying Mexican-American artists in her Chicano art class and decided to attend the lecture and demonstration of Los Angeles graffiti artist Man One last Wednesday.

“He is a Chicano artist and he is very influential,” she said. “This is right up my alley.”

The Public Art Club was excited to have Man One at CSUN to kick off the club’s event schedule for this academic year. Man One delivered his lecture to an audience overflowing the purple art Critroom, located near the CSUN Art Gallery on the northwest side of campus.

Man One has been involved in graffiti art for more than 20 years. As a kid, many of the artist’s friends were involved with graffiti and that is how his journey in the art form began.

“For me, lettering was always first,” Man One said. “A lot of my portraits are done in an abstracted way.”

It takes many years for any artist to develop a personal tagging style, but the experience of painting and tagging on the streets of Los Angeles as an adolescent helped Man One acquire his own unique style. It was not until after graduating from Loyola Marymount in 1993 with a bachelor’s in fine arts, that he decided he would attempt to make a career out of his hobby.

In 2002 Man One founded his own graffiti art gallery, Crewest. Today it is one of 44 graffiti art galleries in downtown’s Gallery Row. Crewest is not only home to the work of Man One, it also features other up and coming artists’ work.

He attributes his success in graffiti art to his professionalism with clients and his strong work ethic.

“I’m not the best artist,” Man One said, “I know plenty of artists who are more talented than I am.”

Recognized for his colorful portraits and large murals, Man One has developed a style that appeals to many different consumers. He has been commissioned by several large companies to come up with concepts for pieces, to spray paint and to do murals. Coca-Cola, MTV, Telemundo, Warped Tour and Microsoft are some of the well-known clients that he has worked with.

“Either you accept commissions or you don’t,” he said. “I enjoy those because it’s kind of like a challenge . You have to satisfy the client.”

Working with Coca-Cola, his first major client, has given Man One the opportunity to travel the world and along the way acquire a larger following.

During Warped Tour, Man One performed live graffiti art. While the people at the tour were walking around, Man One was on a stage spray painting 10-foot canvases as a form of entertainment.

After Man One gave his lecture, the crowd anxiously filed outside to watch him demonstrate his decades of graffiti art experience.

Some people even tested out their own graffiti skills by tagging the back of the Critroom. Of course, the Public Art Club taped butcher paper to the side of the building so there was no illegal tagging going on.

The demonstration lasted from 5 p.m. until about 8 p.m. and many people left with an appreciation for the art form and a better understanding of how to make a living doing graffiti art.

“I didn’t know about him before, but I like his artwork,” Martha Morales said. “I think I’m going to go to his opening show.”

The 18-year-old, undeclared major said that she enjoys watching artists work. Like Silva, Morales was also a lucky winner of a Man One original artwork.