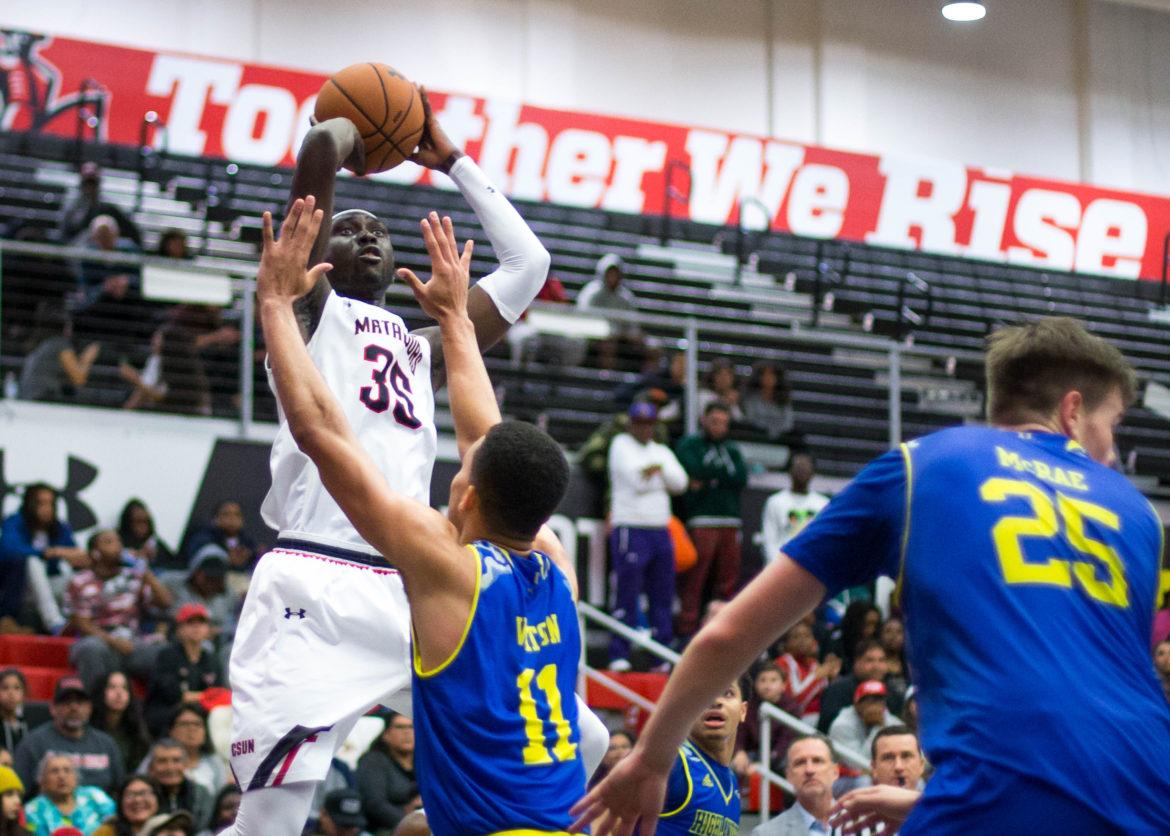 Redshirt freshman Lamine Diane shooting in the win over Riverside on Feb. 27 at the Matadome. Diane recorded 34 points and 18 rebounds against Irvine for his 19th double-double of the season, a new single-season record at CSUN. Photo credit: John Hernandez

Despite redshirt freshman Lamine Diane breaking CSUN’s single-season record with his 19th double-double of the season, the men’s basketball team closed out their regular season with an 86-74 loss to UC Irvine Saturday night at the Bren Events Center.

The loss drops them to seventh place in the Big West, meaning they will be going up against second-seeded UC Santa Barbara on Thursday, March 14 at 12 p.m. in the opening round of the conference tournament at the Honda Center in Anaheim.

“We had a rough first half, but I guarantee if we see them again, we’ll be ready,” freshman Darius Brown II said. “We just got to do a better job of closing out their shooters, better job rebounding. Gotta limit their second chance points. They had a lot of offensive rebounds. They were getting a lot of points inside. They were bullying us but it’s all good. We’re going to be physically ready next time.”

Irvine led from start to finish on Saturday, and though Irvine ended up winning by just 12, it took a monumental effort from Diane to even get the score that close.

Diane entered the second half with just 10 points and made it his mission to push his team as far as they could go, scoring 23 second half points and recording 33 points overall to go along with 18 rebounds, tying his season high.

The Matadors also received help from Brown and fellow freshman Michael Ou, combining for 16 points in the second half. Ou’s play was especially noticed after returning from an injury, receiving praise from head coach Mark Gottfried after the game.

“You know, (Ou) had the ankle injury that kind of set him back, but I think he’s played well,” said Gottfried. “He’s played hard, he’s done a good job and I thought he was great tonight.”

Ou finished with 11 points, going 5-7 from the field before fouling out after 21 minutes off the bench, while Brown recorded 14 points, seven rebounds and five assists, turning the ball over just once in a typical all-around performance from the freshman guard.

The trio of Diane, Ou and Brown ended up combining for 58 of the team’s 74 points as the rest of the squad was unable to pick up the slack, the opposite of what Irvine’s game plan was.

The Anteaters had three players score in double figures as well, led by junior guard Evan Leonard’s team-high 17, though they also had seven players record at least eight points while each of the nine played more than five minutes and scored at least once.

The Matadors take on the UC Santa Barbara Gauchos in the first round of the Big West Tournament on Thursday, March 14 at 12 p.m. at the Honda Center in Anaheim.

Things could have been very different, as they were in a tie for fourth just a week ago and had third place within their sights, but with two losses to close out the regular season, CSUN dropped all the way down to seventh place, though Gottfried feels as if his team can match up with anyone in the conference.

“I think we’re going to be a tough out and we’ve been competitive all year long,” Gottfried said. “We haven’t won as many as we’ve wanted to win but our guys will be ready to play and they’ll be excited about it.”

CSUN will face Santa Barbara just a week after losing to them on a 3-pointer in the dying seconds to spoil Senior Night for the Matadors, making this matchup look much tighter than one would assume based on the seeding.

Should the Matadors pull off the upset, they will set up a meeting on Friday with either Irvine or Riverside, with the Anteaters being the heavy favorite as the top-seeded team in the tournament.

The championship game will be played on Saturday, with the winning team earning an automatic bid to the NCAA Tournament.