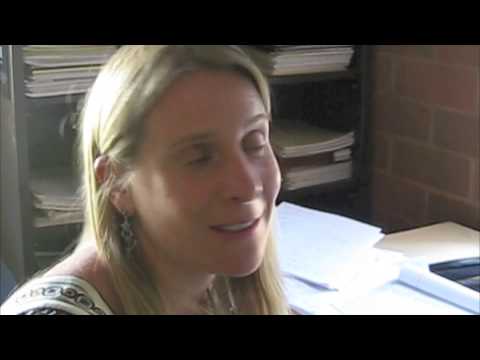 Up in the hills of Montepulciano d’Abruzzo, a town in Italy known for its wine and olive oil-making, an environmental battle is brewing.

And in the middle of it all is a CSUN mathematics professor.

Born in the Bronx to Italian parents, Maria Rita D’Orsogna had never considered herself an activist. But two years ago, a friend of hers, Roberto, who called just to say hello, mentioned something that would forever change her life.

Roberto told her that oil had been found in the Montepulciano d’Abruzzo area and that many believed they would become rich. He told her that a refinery was going to be built, along with oil wells. D’Orsogna was none too pleased.

“When I learned that this was going to be done in an area where the main production is agriculture and wine-making I was like — this is something that’s not right.”

D’Orsogna soon found herself spending lots of time at the Oviatt Library doing research on environmental protection laws in Italy.

“I read some books, spoke to experts and educated myself first,” she said. “It was nothing really conscious; I didn’t do it knowing how it was going to end.”

She found herself getting in touch with farmers via e-mail and phone calls to make them aware of how the oil refinery would affect them. She then traveled to Italy to take part in a convention.

But distance kept her away from subsequent conventions.

She recalled telling farmers that she couldn’t be forever making repeated trips to Italy.

“I don’t live here so why don’t you guys invite someone else to do this,” she told them. But she said their reply was: “No, no, we want you.”

Within months, D’Orsogna began a blog to educate, translate and communicate with those who would listen. She found herself e-mailing authorities in Italy including the Catholic Church and celebrities but oftentimes, she said, “They didn’t want to embrace the cause.”

“All this is really thanks to the Internet, thanks to Skype and all those things that allow us to live in this globalized world of ours,” D’Orsogna said.

Her blog, which she updates every two days, is read not only by university students and those immediately affected but also by the heads of oil companies, who on more than one occasion have left insulting comments.

But she remains undeterred. One thing keeping her closely linked to the faraway legal battle is the ability to attend meetings in Italy without leaving her office, using Skype.

“Since there is a time difference and in Skype you can only see a little bit, I would look nice only from the waist up and in the bottom I would wear my pajamas,” she said.

Sharing why she feels such a connection to Italy, D’Orsogna explained that as a child she and her family moved there.

“Part of me feels love for this place because I lived there for ten years and part of me feels a sense of (responsibility) because I have access to information and resources because I am in a university environment,” she said.

She also said that she has always been responsible about her environmental impact. She recycles; she hauls her groceries in reusable bags and watches her water use. But she had never been motivated to become active in California.

“We live in California and we take it for granted that almost everybody here has a love for the environment,” she said. “But in Italy, it’s not so widespread.”

Her work in Italy has made her aware of the impact it has when people get involved. And so at CSUN, she has joined the Institute for Sustainability. But she still does most of her activism on the Italian front.

“I cannot do everything; I have not taken the lead on anything (at the CSUN institute) but I do want to participate.”