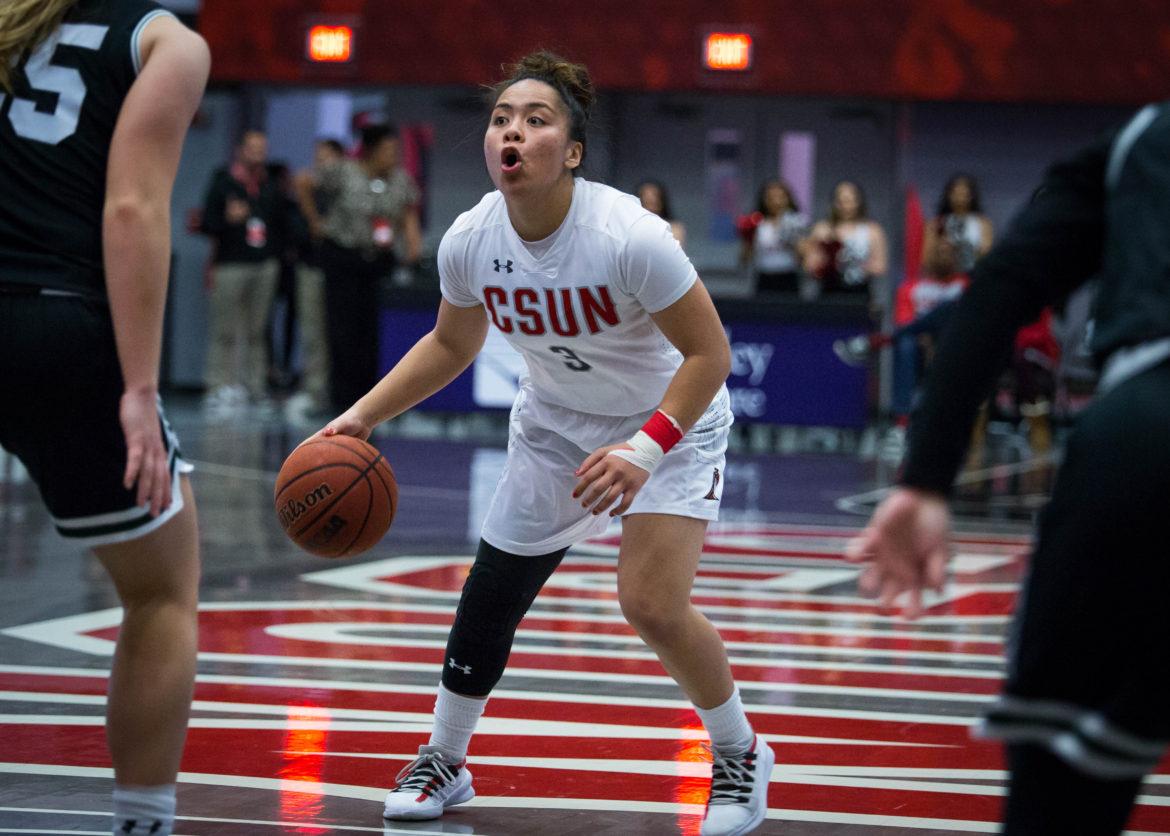 Serafina Maulupe in the Senior Night loss to Hawaii on Saturday, dropping CSUN to fourth in the Big West Tournament seeding. Maulupe scored a game-high 24 points, going 10-16 from the field and 4-4 from beyond the arc in her final home game as a Matador. Photo credit: John Hernandez

It was a back-and-forth game between the women’s basketball team and the University of Hawai’i Rainbows. Ultimately, the rally that started in the second half was not enough as the Rainbows came out on top 69-68.

Senior Serafina Maulupe finished the game 10-16 from the field and 4-4 from three to finish with 24 points as the senior played her final game at the Matadome.

“It would’ve meant a lot more if we won, but it was close,” said Maulupe. “Personally it doesn’t mean a lot since we lost. I gave it my all and I did my best. We just have to put this behind us and now we just have to move forward. It’s a clean slate for everyone, so we look forward to the tournament now.”

Maulupe became the 13th Matador to score at least 1,000 career points, achieving this incredible feat the last time the Matadors played the Rainbow Wahine on Jan. 17 in Hawaii.

“It honestly means a lot,” said Maulupe. “Just the work that I put in throughout these years, it paid off … in the end, you have to look at the bigger picture and honestly reaching 1,000 points, hitting that milestone, it really means a lot to me.”

Seniors Maulupe, Channon Fluker and Claudia Ramos were honored as they completed their final game at the Matadome after the loss. Since each of them started playing at CSUN, head coach Jason Flowers has been honored to watch them grow not only as athletes, but as students and human beings as well.

“Obviously, we are disappointed with this afternoon’s outcome, but overall the team has grown and gotten better,” said Flowers. “Our seniors, if you’ve seen them as freshmen the first time they walked through the door, to see who they are not only as basketball players but as young people, is what this whole process is all about.”

Fluker has over 2,000 career points and has broken 10 program records, as well as the all-time Player of the Week record in the Big West. Ramos played for the Mexican National Team in two tournaments during the summer of 2018.

With the Big West Tournament about to start, the team is going to prepare Monday and Tuesday so they can be ready for whoever they play on Wednesday, March 13.

“It’s a situation where obviously you work all year to get in this situation and we’re here now and we’ve got to do what we need to on both sides of the court,” said Flowers.

The team heads to Big West Tournament as the No. 4 seed and will play the second lowest remaining seed on Wednesday, March 13 at UC Irvine.