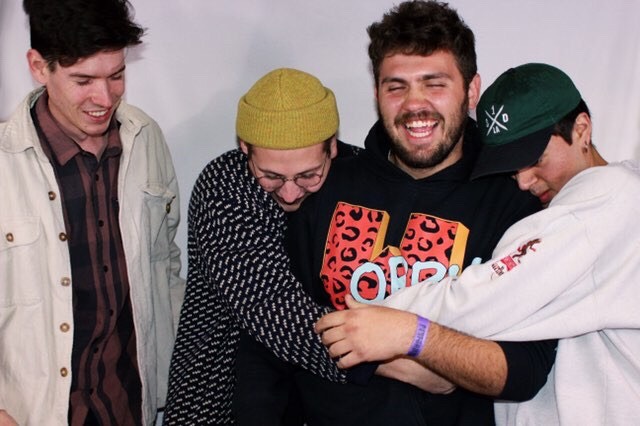 The San Fernando Valley is made up of an extremely tight-knit community of young and inspiring artists. They record music in bedrooms from Sylmar to Burbank and play in backyards across the LA area. Here are just a few.

Kyle Bowes is an artist from Woodland Hills. Bowes, raised by a single mother who was a musician, picked up a guitar at 12 years old and started practicing every day. His mom bought him an audio interface so he could plug his guitar into GarageBand when he was 14 years old.

“I remember recording some songs with a few guitar tracks on it and some off-tempo drum beats,” said Bowes. “I posted it on SoundCloud, and that became the day I got into songwriting and producing music.”

Bowes’ music ranges from folk rock to synthpunk. He explained that the music he creates mirrors whatever he is listening to at that moment. Apart from influences like George Harrison, the Del-Vikings, Elliot Smith and Adam Green, fellow artist peers are his biggest influences.

“Whether they know it or not, they always push me to want to do something great,” said Bowes.

His latest singles, “Thinking Clearly” and “Postcards of Future Mistakes,” can be found on SoundCloud.

Steele started the band in high school with two other musicians. From there, they found Sorto and Bubar. Bubar helped write their album, “Sleep,” which was released in 2018.

According to Steele, the band evolved from a punk band into a band that wrote “slower, heavier, more meaningful things” while recording “Sleep.”

Solo artist Atlakatl Ce Tochtli, raised in Sylmar, grew up immersed in a culture filled with music and creativity. Being the youngest in his family, he was greatly influenced by his father and older brother who were both musicians.

“They taught me so much about music,” said Tochtli.

In middle school, he discovered a genre called jazz fusion through jazz club, which influenced him to create his own music. Now he’s a producer, as well as a bassist and a keyboardist. He has created his own genre, “fairy funk,” describing it as “kind of groovy but really light-hearted.” It is a combination of his musical influences: funk, hip-hop, ambiance and jazz.

Tochtli also creates visuals along with his music, influenced by his maternal relatives, who are graphic artists. He combined his music and his visuals to create what he describes as “disturbing art.” This allowed him to express feelings that can be destructive, disturbing and/or painful.

He is currently working on releasing an album called “Grass Through Cracks.”

Centered around the Van Nuys/Northridge area is the band Klementines, who has been playing and writing their own music since 2016. According to drummer Devin Knell, the group was started by a former guitar and current bass player, Thomas Layman, who invited Knell and current lead singer Blue, aka Britney.

The band’s sound has been known to sound indie/alternative, and like surf music. Their different influences – from Alabama Shakes and Cage The Elephant to older artists like the Beatles – have helped create their own unique sound.

Based in North Hollywood, punk band Banned from Japan was started by Matthew Earle (guitarist and vocals) and Joe Haramut (drums) in 2016. The band’s name was founded by their bass player, John Velasco.

Influences from a variety of bands and artists, like NOFX, Rancid, Sublime, Just Friends and Frank Zappa, have helped in creating the band’s own genre, which they coined as “singer/songwriter punk.”

Their first album, “Moist Muffin,” released in 2017, was written by Velasco. Their latest album, “I Can’t Believe It’s Not Meth,” was released on March 3.

Local Sylmar band Spookydelics started in the summer of 2017. Started by lead singer Hugo Alba and band member Jesse Garcia, the band evolved from a deathcore band to one that was interested in exploring and combining a wide variety of genres.

Some of their influences include artists such as Homeshake, Mac DeMarco, Tame Impala, Jimi Hendrix and Chelsea Grin. The variety of music influences made it challenging for the band to find their own sound at first.

While rehearsing for a Halloween show, the band was creating “spooky” music for their upcoming show. The band members were also influenced by the psychedelia genre, so they combined both the genre and the term “spooky” together to create their band name.

Spookydelics are working on an album to be released in the coming year.

Yaotl’s father, who is a major influence on the artist, was well-known in the Valley punk scene, performing at cultural community events. As a child, Yaotl would watch his father perform, which was how he fell in love with music. In high school, he joined a DJing club and learned how to produce music.

The artist describes his music as emotional/experimental rap.

“Letting it out on the mic to groovy beats and different types of beats,” Yaotl explained.

His musical influences range from punk bands like Bad Brains and Circle Jerks to heavy metal bands and hip-hop artists like Rage Against the Machine and Mos Def.

Yaotl has released singles, remixes and has an album on Spotify called, “Love Is a Verb.”