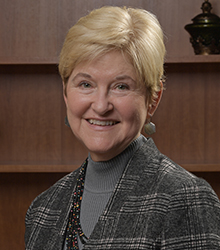 The interim president at Georgia Gwinnett College stated that creating initiatives to increase the diversity among faculty and staff will lead to a workplace that reflects the same diversity of the student body.

Mary Beth Walker, Ph.D., answered questions that addressed the diversity and tension between the CSUN faculty and staff as a candidate to fill the role of provost which is temporarily held by Interim Provost and Vice President for Academic Affairs Stella Theodoulou.

“We have a wealth of diversity in our students so our faculty … they don’t reflect that same diversity,” Walker said. “We have a responsibility here to create an inclusive unity.”

Walker explained that the first step to creating a more diverse workplace would be to gather demographic numbers of those hired in the last five years and compare to the numbers she would like to see in the next five years to begin the initiatives to create a faculty, staff and administration that better reflects the students.

The initiatives Walker proposed at the forum include hiring research faculty or postdoctoral candidates on a limited-term temporary basis, which will give an opportunity for those who accept the position to see if it is an acceptable fit. Also, recruiting graduating Ph.D.’s by marketing open positions in nearby areas and creating an effective search committee.

Walker also addressed a question regarding the repercussions of Executive Order 1100-R, which has been a subject of intense debate between faculty and the administration, saying there would be no quick-fix to the issue, but having continued conversation with faculty and staff will help her understand what will help change the animosity on campus and how things can move forward in a positive way.

Walker is one of four candidates undergoing interviews for the position of provost. The provost is the university’s senior academic officer who will be “responsible for implementation of academic priorities for the university, and for the allocation of resources that will support those priorities,” according to CSUN’s Office of the Provost and Vice President for Academic Affairs webpage.

For information on the other prospective candidates for provost, check out our articles on DoVeanna Fulton, Vann Newkirk and Simon Rhodes.