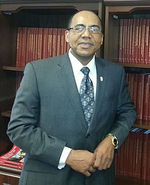 The provost of Fisk University in Tennessee, a historian, career administrator and professor, is applying for CSUN’s open provost position.

Lynching historian and author of “New Life for Historically Black Colleges and Universities,” Vann Newkirk, has served in an administrative capacity at multiple universities in the southern United States including Elizabeth City State University in North Carolina, Fort Valley State University in Georgia and Alabama Agricultural and Mechanical University, and earned his Ph.D. in history from Howard University in Washington D.C.

Newkirk laid out what his goals would be as provost at an afternoon open-forum, beginning with a presentation highlighting his top three goals: increasing student enrollment, improving student retention and increasing research activity.

Newkirk’s plan for accomplishing those goals stretches from building community ties to local community colleges, high schools and elementary schools, all the way to getting CSUN to offer online courses overseas in countries such as Vietnam, Nigeria and India.

If chosen, Newkirk’s plans for CSUN would include many sweeping changes to how the university hires faculty and where students come from, including having CSUN lean heavily on attracting military focused students.

“We talk about an institution that’s dependent upon federal financial aid and financial aid, it leads to gaps in some of our funding,” Newkirk said. “If we had students who are dependent on VA, which we don’t have to put in a lot of institutional funding in, makes us a strong institution. So I think we should develop certain programs that are targeted toward the military.”

At Elizabeth City State University, where he served as provost and vice chancellor of Academic Affairs, Newkirk led efforts to create degree programs including ones in unmanned aircraft systems, homeland security and sustainability.

“These would be hybrid programs such as public safety and administration, graphic communications, homeland security,” Newkirk said. “These are just some of the things … that we could create.”

Programs like this — military and community centered programs — are what Newkirk identifies as important for growing the student population at CSUN, including “high-impact” graduate programs like one in executive leadership that he believes would be positives.

With changes like this possibly on the table, Newkirk would want to ensure any university-wide changes are changes that everyone, including students, are comfortable with, but didn’t specify what that process would look like.

“At this university, at any university, we want to make sure that if we’re gonna make any kind of changes, that those changes are changes that we’re all involved in,” Newkirk said. “And those are changes we feel comfortable with as a university. That’s how I operate as a provost.”

In response to questions about the divided state of CSUN’s administrative and faculty bodies, Newkirk responded that frequent meetings between the provost office and college departments are the key.

“The provost has to be the chief advocate for the faculty,” Newkirk said. “We’ve got to have frequent conversations, we have to trust each other.”

When asked about CSUN’s faculty diversity, a predominantly white population of educators serving a campus made up of approximately 75 percent students of color, Newkirk responded by suggesting a targeted approach: inviting postdocs to CSUN and forming relationships with minority-serving institutions that offer doctoral degrees in order to create a faculty at CSUN that mirrors the students who come here.

Newkirk is one of four candidates undergoing interviews for the position of provost. The provost is the university’s senior academic officer who will be “responsible for implementation of academic priorities for the university, and for the allocation of resources that will support those priorities,” according to CSUN’s Office of the Provost and Vice President for Academic Affairs webpage.

For information on the other prospective candidates for provost, check out our articles on DoVeanna Fulton, Simon Rhodes and Mary Beth Walker.