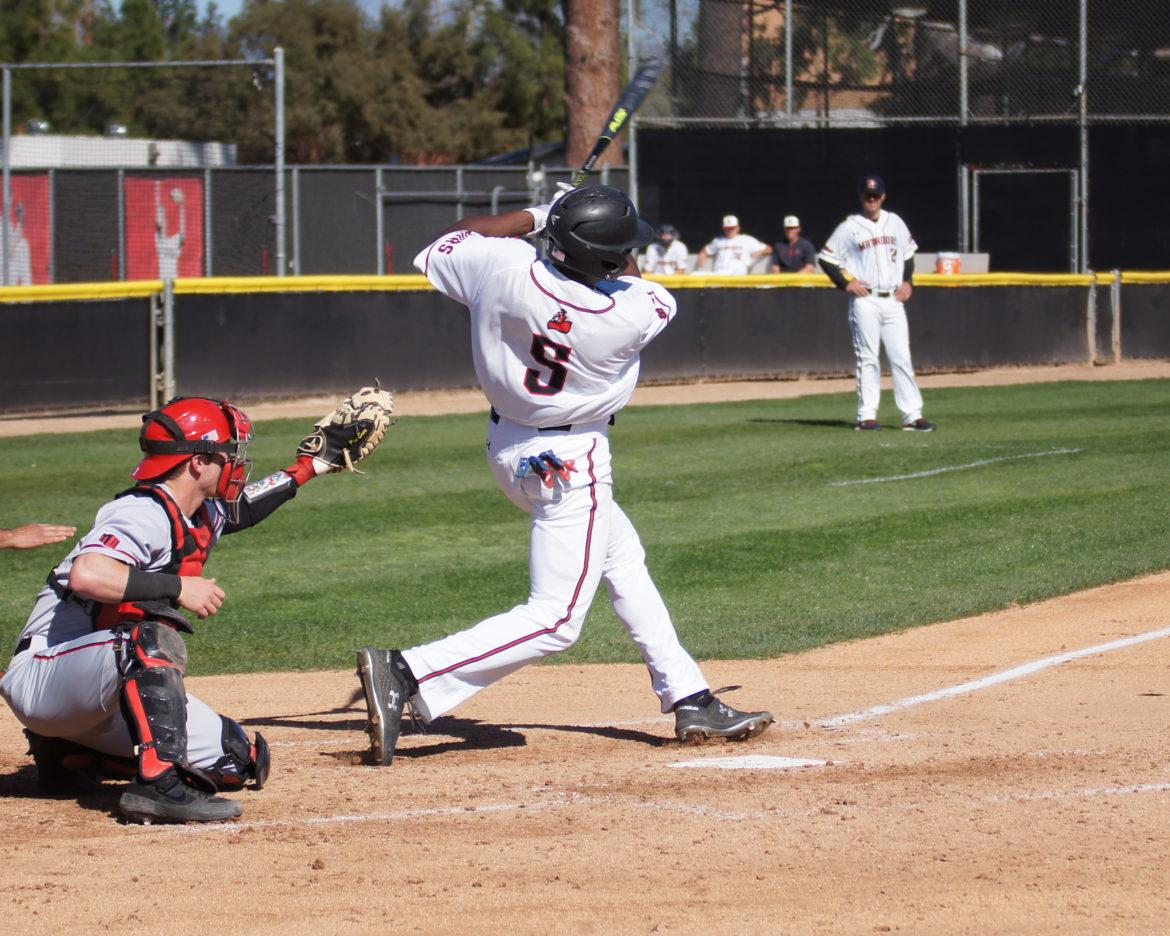 Freshman Denzel Clarke in the 11-5 loss to San Diego State University on Tuesday. The outfielder went 2-3 at the plate with a home run and a walk, scoring three of the five Matador runs. Photo credit: Bryanna Winner

The Matadors were defeated by San Diego State University 11-5 at Matador Field on Tuesday, pushing their record down to below .500 at 8-9.

This is their second loss in a row following the 10-1 drubbing to Washington State University on March 10.

The game was scoreless until the Matadors pushed through during the bottom of the third on freshman Austin Elder’s RBI single.

Going into the top of the fourth, the Aztecs took control and never let go, scoring multiple times in four different innings after CSUN took the early lead.

Just like the loss against St. John’s University last Tuesday, the bullpen struggled to land pitches in the spots they wanted to. The Matadors went through six pitchers in their bullpen, giving up seven runs during the remaining innings after freshman starter Blake Sodersten was pulled after four and a third innings pitched after recording five strikeouts and giving up three earned runs and four total.

Though the bullpen struggled, the offense was able to produce five runs off of nine hits. Freshman Denzel Clarke went 2-3 with a home run and a walk, and scored three of the five Matador runs, while Elder and senior Kyle Barret went 2-4 with one RBI and one walk each.

“What I try to do is do anything I can for the team,” said Clarke. “I was lucky enough to get a hold of one today, get on base and try to put the team first and do what I came to do.”

Clarke’s home run was his third one of the season and his three runs scored was a season high for him.

“I just tried to get a fastball,” Clarke said. “Pitcher tipped his pitch a bit and I knew it was coming, so I was able to turn on it and luckily I was able to get a barrel on it and drive it.”

The team starts a six-game road trip this weekend, starting in Iowa City, Iowa to play a four-game series against the University of Iowa Hawkeyes before playing one game each against University of Nevada, Las Vegas and Pepperdine.

The Matadors will return home for a three-game series against the Santa Clara University Broncos starting on Friday, March 22, with games on Saturday, March 23 and Sunday, March 24 to finish off the series.