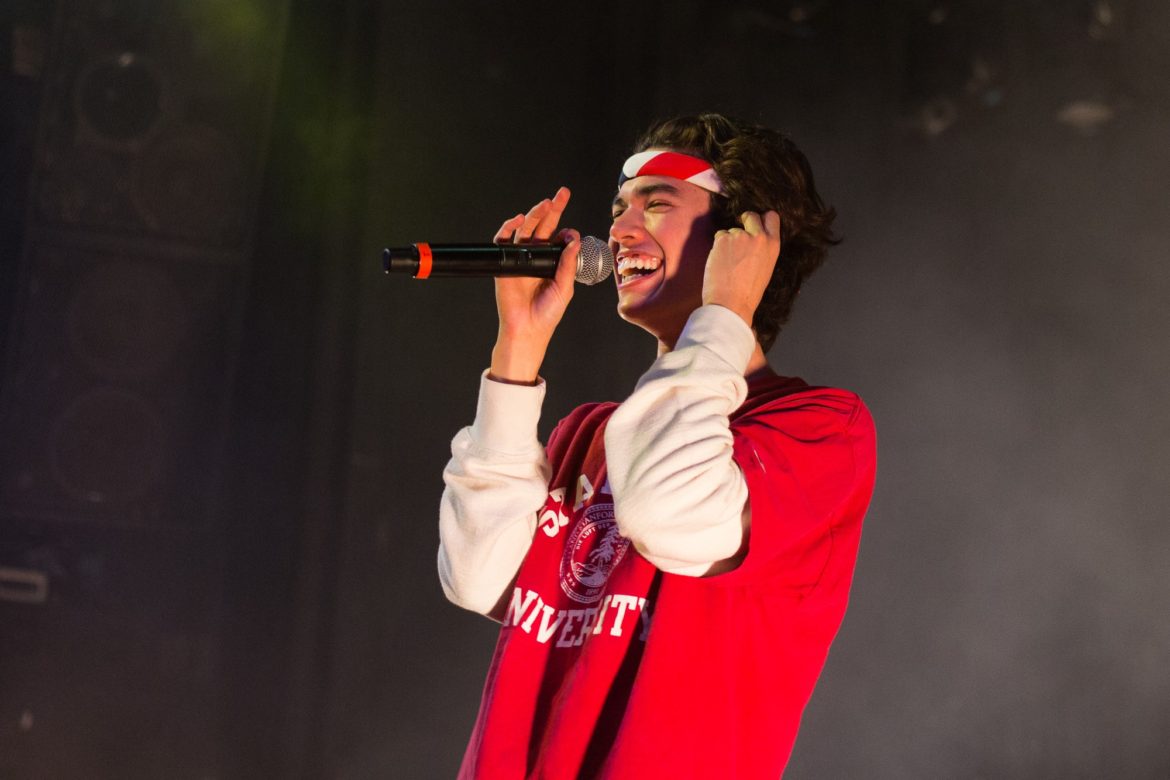 In the span of his career, 20-year-old Conan Gray has evolved from YouTube sensation to a successful recording artist who sold out his first U.S. tour.

At just 12 years old, Gray began to upload videos on YouTube, one of his first being a cover of Adele’s rendition of Bob Dylan’s “Make You Feel My Love.” Today, Gray has accumulated a large and devoted following through the release of his latest EP, “Sunset Season.”

Among the many covers and original songs posted on his YouTube channel, Gray has videos like “Getting Into My Dream School” and “My College Room Tour.” It was just one year ago that Gray was sat in his hometown in Texas when he got the news that he had been accepted into UC Los Angeles. Not much later, he was in the studio recording his EP.

“It really didn’t feel like much of a transition,” Gray said about the moment his career in the music industry began. “It was a very, very slow and a gradual thing, but a lot happened this year, a lot changed this year … and I’m in a phase of my life where a lot of things are changing. My senior year of high school I put out a song called ‘Idle Town’ which I made in my bedroom. Once I started going to school, (‘Idle Town’) kept doing well and labels started reaching out, so I went straight from high-schooler to college student to being a singer and a songwriter very quickly.”

As quick as the change may have been to viewers and friends of Gray, the young star can’t help but feel still as a tornado of opportunity dances around him.

“The transition feels like it’s been simultaneously really slow but also really fast and I still can’t wrap my head around it,” Gray explained.

On Thursday, Gray took the stage at the El Rey in downtown Los Angeles where he played a sold out night.

As the curtains slowly opened, Gray’s three-member and all-female band appeared swaying back and forth to the echo of the opening song “Generation Why.” Fans had all prepared multi-colored lights in the shape of stars, with messages for the singer on the back. Posters adorned with sweet sayings and even a prom proposal went up as soon as the singer entered the room.

A striking element of this show was the intimate connection displayed in the crowd that night. Fans sang along to every single word, asked questions and got answers, and showed their praise by openly saying “thank you” after each song.

To Gray’s surprise, the fans even sang along to the unreleased “Comfort Crowd,” a song Gray says is about “being really lonely and wanting to spend time with friends.”

In unison, the crowd asked, “Ashley?”

When YouTuber Troye Sivan left the platform and entered the mainstream as an actor and singer, his fans could be seen commenting in disappointment that he would not return. Gray says his experience was quite the opposite.

“I think people kind of knew right when ‘Idle Town’ did well that this is what I was going to do and once I started putting songs up (on Youtube), music really started to take the forefront pretty fast,” Gray said. “It was never really a question for me or my viewers to whether or not I was going to make music and people were so ready to hear the music at that point that I think everyone was kind of like, ‘Oh thank God, he’s finally accomplishing the things that he was talking about for so long.’”

Although Sivan never returned to YouTube as a creator of personal content, Gray says his connection to the platform runs deep and he could not see himself abandoning it completely.

“I look at YouTube like something that means so much to me, it is where I grew up and I’ll never not be posting videos and I’ll still be posting videos on that channel, it’s just that my life is so different than when I first started making videos,” he said. “I wasn’t touring all the time. These days I’m never really in a city for more than a day so my life has changed a lot.”

Most if not all of the songs off of Gray’s “Sunset Season” were written during his senior year of high school in 2017. One of his most notable cuts is called “Crush Culture,” a song that seems like it was taken straight out of a diary entry with lyrics like, “I don’t want your sympathy, all this love is suffocating, just let me be sad and lonely.”

“That song definitely gets a little too personal at times and I can’t really help it when I’m songwriting. I definitely get all my inspiration from my own life and when I write … ” Gray laughed nervously, ” … I’m just not a very good liar, I just kind of have to say things how they are and that song, in particular, I think it just needed to be said. I wanted a song that single people could sing at the top of their lungs and when you’re single and you see people who are in love you can’t really help but kind of hate it.”

Gray hinted at a possible album in the works and also mentioned that he will be on tour for a majority of the following year. Despite this, Gray is still enrolled at UCLA.

“In the beginning, it was basically impossible. It really just felt like a whole Hannah Montana situation, I’d go to class eat lunch in the dining hall and then go to the studio for nine hours,” he said. “After that, (I would) then go to sleep for like two hours and then repeat for like weeks and weeks and weeks. It was hard living a double life so when I signed and started touring I was like, ‘Okay Conan, you have to decide which one you want to prioritize at the moment or else you’re going to get torn apart.’”

Gray’s success, he says, is all thanks to his fans and their devotion and love for the music.

“It’s been really nice because everyone is so excited for the music that I’m making,” he said. “I feel like touring is a more extreme way of making videos cause you’re right there with the person and you can actually hug them … it’s been really rewarding for me to like actually go out and be able to see the people and sing for the people who I’ve seen on my screen for so long.”

Gray will continue to tour across the U.S. and in Canada. Follow him on Spotify and keep up with him on social media @conangray