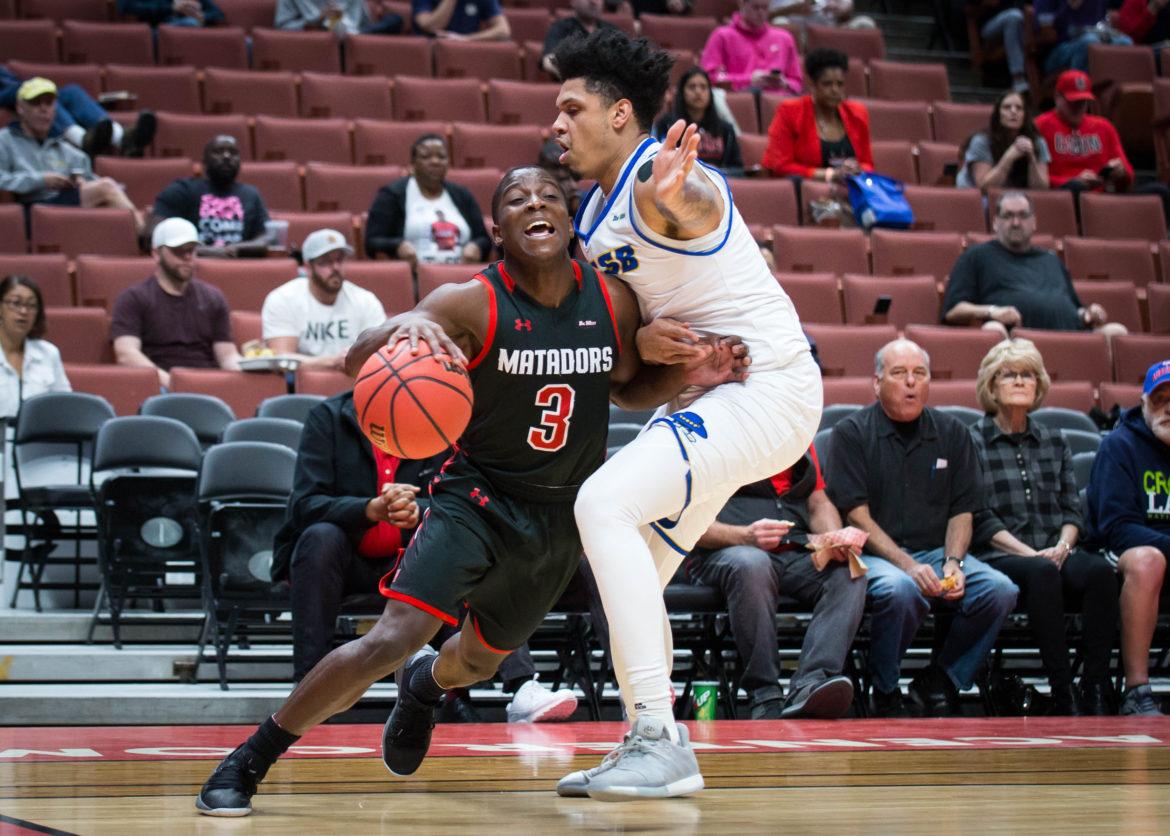 Sophomore Terrell Gomez attempts to drive by a UC Santa Barbara defender in the Matadors' first round loss in the Big West Tournament at the Honda Center on Thursday. Gomez scored 16 points in the tightly contested game, though he missed the final shot to send the game to overtime. Photo credit: John Hernandez

It was an early exit for the men’s basketball team in the Big West Tournament as they lost to second-seeded UC Santa Barbara in the first round by a final score of 71-68 at the Honda Center on Thursday.

In a game that CSUN head coach Mark Gottfried said was a representation of his team’s season as a whole, the seventh-seeded Matadors had an opportunity to win the game late but were unable to execute when they needed to the most, allowing the Gauchos to shoot 50 percent from beyond the arc and giving up 18 second chance points.

“I thought our kids played their hearts out,” Gottfried said. “Played as hard as they could possibly play. The game came down to the last few minutes. We gave up a big three, I thought that hurt us — (Armond) Davis’ shot in the corner. We had some offensive trips where we just came up short. Not bad shots, the ball just didn’t go in.”

CSUN ran out to an early lead before the Gauchos tied it at 14 apiece about seven minutes into the contest.

From there, the Gauchos were all over the Matadors, going on a 14-0 run midway through the first half, though CSUN would bounce back to cut the deficit to just eight going into the half.

The second half was as tight as can be, with the Matadors enabling themselves to claw back by holding the Gauchos to just a 29.6 percent shooting clip from the field after allowing them to shoot above 50 percent in the first half.

This uptick in defensive effort was due in large part to the introduction of junior Mahamadou Kaba-Camara to the contest. The 7-foot center played all 11 of his minutes in the second half, getting a block and three rebounds while providing tremendous coverage of the paint, denying the Gauchos the freedom they had had down low in the first half.

The Matadors were able to take a six-point lead with about five minutes left in the game, though they would struggle from there, making just one of their last six shots as the Gauchos reclaimed the lead and kept CSUN from getting any good shots off. Sophomore Terrell Gomez was forced to take a tightly contested three on the last play of the game, a shot that came nowhere close to going in as the Gauchos came away victorious.

Redshirt freshman Lamine Diane scored a game-high 22 points to go along with 17 rebounds, four assists and five blocks, though as great as those numbers were, he was unable to get it done down the stretch, being held scoreless for the last six minutes of the game.

“You know, I wish I could tell you there was some secret formula,” Santa Barbara head coach Joe Pasternack said about keeping Diane in check. “I thought our guys really positioned themselves wherever he went, right to left, he had a guy on each side of him and we worked on that three days this week of really being in the gaps so he couldn’t go right or left and our team just really responded to our preparation.”

Gomez, despite missing the shot at the end to send the game to overtime, recorded 16 points on an efficient 6-11 showing from the field, as well as three assists and three rebounds, while junior Rodney “Rocket” Henderson scored 15 points and was equally as efficient, going 5-9 from the field and 3-6 from beyond the arc.

After the early exit from the tournament, the Matadors end their season with a 13-20 record.

For a team that was made up of mostly freshmen and sophomores, with a couple of juniors and seniors mixed in, this season was not a lost one and Gottfried was vocal about that after the game.

“Without a doubt (this season is a success),” Gottfried said. “We didn’t win as many games as maybe we’d all like to, but I think when you consider where the program was and what’s been established now … I think we started the year arguably, I don’t know all the statistics, but maybe the most inexperienced team in the country, let alone the conference. To look at where we started and where we are today, there’s a lot to feel really good about.”

The young core of the Matadors may have let their fans down when it mattered most, but it’s hard to argue against any other team in the Big West being as talented as they are.

Diane averaged 24.7 points and 11.3 rebounds per game, recording a Matador single-season record 19 double-doubles in the process, while Gomez averaged 19.1 points per game and freshman Darius Brown II averaged 8.4 points and 5.3 assists per game. Brown was also 11th in the entire nation with an assist-to-turnover of 3.0, showing he is not only talented, but plays with a poise beyond his years for someone playing his first season of Division I basketball.

And even if Diane chooses to leave after just one year at CSUN and enter the draft (as many believe he could), this team can be much better next season than their record showed this year even without taking into account any natural progression from its young core. They may have lost 20 games, but half of them were by five points or less, and with a little more experience, they can be a force to be reckoned with moving forward.