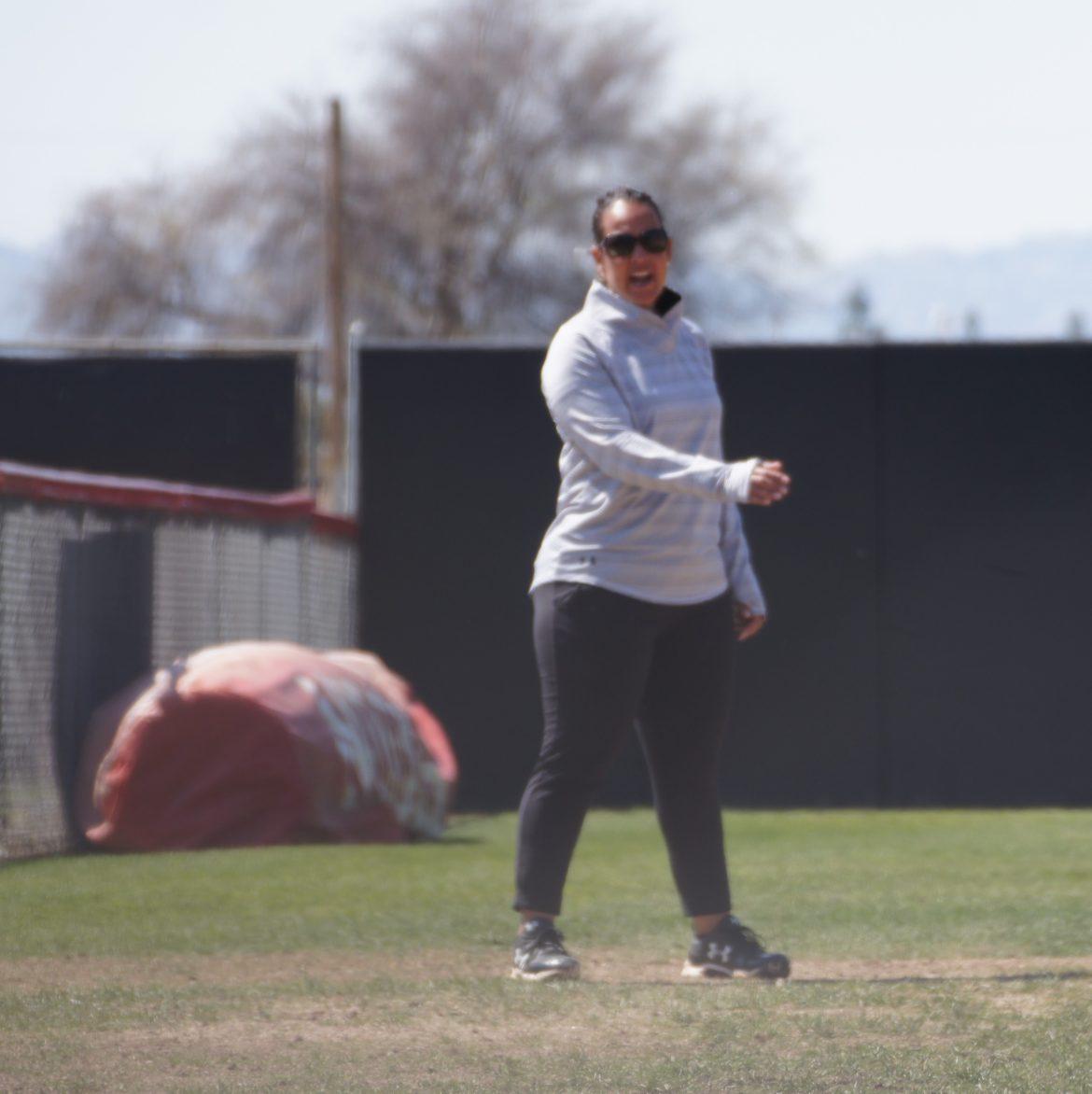 Flowers coaching at third base while the Matadors are up to bat. Photo credit: Bryanna Winner

Tairia Flowers is not only the head coach for the softball team here at CSUN, she is also a former Olympian and Women’s National Team (WNT) member.

As a college player at UCLA from 2000-2003, Flowers helped the Bruins get to three Women’s College World Series, winning it once in 2003. During her international career, she helped the United States to a gold medal at the 2004 Athens Olympics and a silver medal at the 2008 Beijing Olympics.

She began coaching the Matadors in 2011 and in February of this year was named as an assistant coach for the team that will be competing at the 2020 Tokyo Olympics.

“I’m thrilled, honestly. I don’t really know if I have the right words,” Flowers said. “It was an honor to play and now that I get to coach, it’s just … being around them you’re always soaking up information and getting better and it’s just a great opportunity.”

Current and former players share Flowers’ enthusiasm as she continues her international coaching career after being a coach on the 2011 WNT and 2013 and 2015 Junior WNT.

“I think it’s awesome because she was a good player when she was playing and then now, she has so much knowledge of the game, she spreads it and she learns a lot from there too so she brings that to us,” said junior Gator Rascon. “I know it’s different with our team and that team, but I feel like you can kind of see what it’s about over there as she brings that to us.”

This will be Flower’s second go-around with the WNT after also coaching them in 2011. She will be joined by Oregon State head coach and former Olympic teammate Laura Berg as well as Louisiana State assistant coach Howard Dobson on head coach Ken Eriksen’s staff.

“(Flowers has) made such a big impact on softball in general and in our community and here at CSUN,” said former CSUN player Savannah Horvath. “She’s been with Team USA before, coaching, playing, all that good stuff. I think it’s a great opportunity for her to go back and teach the knowledge that she is now teaching our girls and what she has taught me in the past. I’m excited and I think she’ll lead our country to great things.”

Two members of the current roster of 19, pitchers Cat Osterman and Monica Abbott, are former Olympic teammates of Flowers. Osterman, who came out of retirement, was on both the 2004 and 2008 teams while Abbott was only on the 2008 team.

“That’ll be interesting but as a catcher that’s kind of what you’re doing. You’re managing people and I’ve been there catching them before,” said Flowers. “They know the game and at this point, at this level, there’s not a whole lot of coaching going on. It’s just keeping them in a good place and reminding them how good they are and what they can do.”

The coaches have the task of dropping that number from 19 to 15, so they need to look for not only the talent, but also if these players work well with each other.

“I think talent is a given,” said Flowers. “If you are coming to a national team tryout, it’s that talent but it’s also that team aspect. You only get 15 so you’ve got to figure out who works the best, who is versatile and willing to do anything for the team.”

With softball not having been in the Olympics since the 2008 Beijing Games, most of these players have never been. Unfortunately, Tokyo 2020 may be their only chance, as softball isn’t on the shortlist of sports for the 2024 Paris Olympics after many fought to get it back.

“It’s just so disappointing because it’s getting so popular in the States and seeing where it’s come from,” said Flowers. “It’s sad knowing that these girls don’t have that same opportunity to look forward to or even work for right now. Hopefully beyond we can try and get it back in.”

This being her second time through the system as a national team coach, the process has helped to shape her into the person she is today by throwing curveballs her way, not only as a player, but also as a coach.

“I think it’s why I am who I am. It’s a game of failure,” said Flowers. “I really feel like I’m a resilient person and it’s shown me how to appreciate when things are thrown your way but understand that they aren’t always going to go that way. You can hit the ball perfectly and not get on but you just keep working it and learn how to get better.”