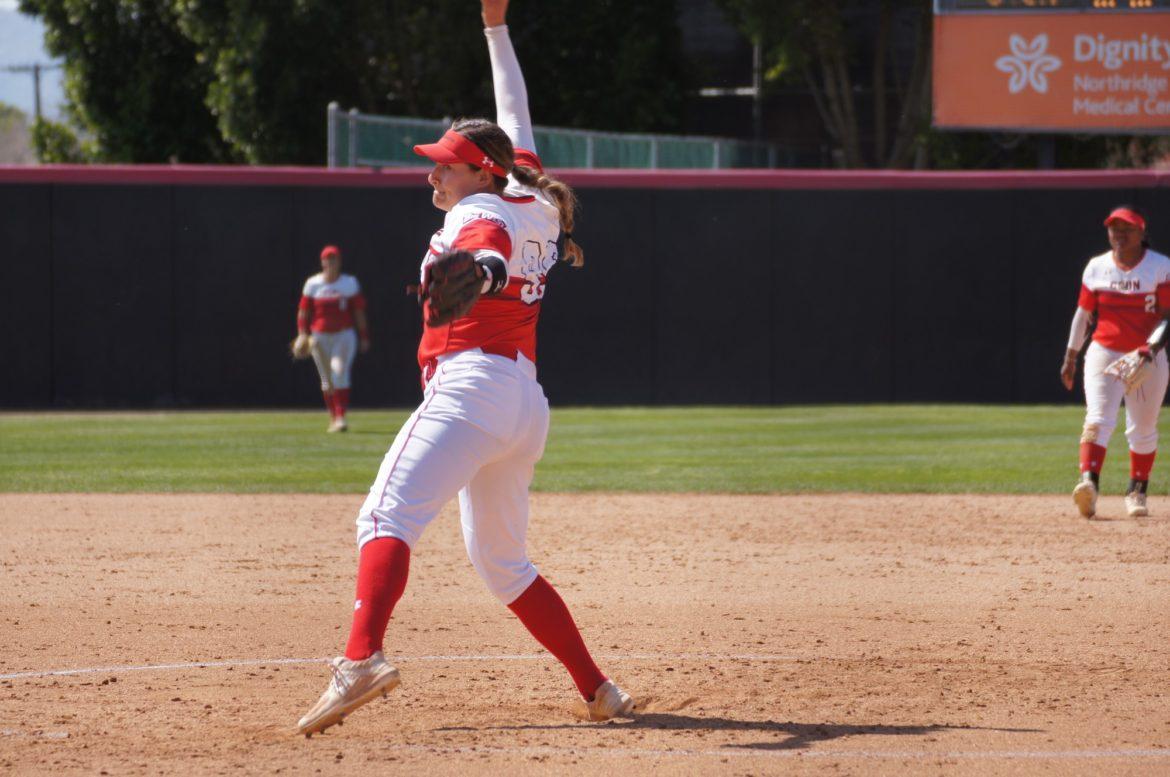 Sophomore Jillian James pitching against UCLA on Sunday. James pitched a one-hit shutout against Saint Mary’s College and came in for 2.1 innings in the 14-2 loss against UCLA. Photo credit: Bryanna Winner

The Matadors scored 22 runs to sweep Saint Mary’s College in their three-game series over the weekend before No. 1 UCLA demolished CSUN 14-2 in the final game of the weekend at Matador Diamond.

In the first game, sophomore Jillian James pitched her second shutout and seventh complete game of the season, giving up just four hits and recording four strikeouts throughout the six innings.

The Matadors struck first in the bottom of the first inning, before junior Megan Stevens hit a bases-clearing triple in the fourth to give the 5-0 lead before they added three more in the sixth to walk away with an 8-0 win.

The second game saw sophomore Kenedee Jamerson start the game on the mound. She went 4.2 innings, recording four hits and walked just one while giving up two runs in the process.

Sophomore Kira Cauley was 2-3 in the game while senior Haileigh Gonzalez and junior Jessica Alexander both finished 2-4. Freshman Kiarra Crocket-Pope hit her fourth homer of the year, a two-run shot into left field in the sixth to make it 8-2.

Freshman Elise Madison came in to relieve Jamerson in the fifth, keeping the Gaels at bay for the remaining 2.1 innings to ensure the 8-2 victory.

Sunday saw the Matadors split their final two games with a 6-0 win against Saint Mary’s and 14-2 loss in six innings to No. 1 UCLA.

James pitched her eighth complete game of the season and second of the weekend with a one-hit shutout in the morning game against Saint Mary’s.

“I’m really proud of where we’ve come this season compared to last season,” said James. “I was walking a lot more (last year) so this season we are focusing on attacking and hitting the two-pitch strike two out of the three first pitches. I think that’s helped me come further in games because they aren’t seeing as many pitches.”

Head coach Tairia Flowers was impressed by James and her ability to attack hitters in a weekend that saw her shut out the opposition over 15.1 innings pitched as she also came in to pitch 2.1 scoreless innings against UCLA

“JJ’s got some good velocity and good movement,” said Flowers. “She’s doing a good job for us. It was nice seeing her gain confidence and go right at hitters.”

Although the Matadors weren’t able to complete the perfect weekend, James felt that her team put a solid fight against a Bruins squad that has lost just once in 28 games.

“Coming in to UCLA, I knew they were a good team. They are the number one in the country so I knew, just kind of ‘hit your corners and snap hard,'” said James. “I knew my defense would back me up.”

Malia Quarles, the first batter James faced against UCLA, had a 13 pitch at-bat fouling off anything close.

“They are a good team and that kid came out swinging,” said Flowers. “She knew what her job was and that was to put the ball in play. I thought JJ did a good job and she didn’t let up and she went right at her.”

“I thought we did a good job in the first game. The third time seeing a team is hard,” said Flowers. “You have to make adjustments. We came out hard and made things happen. We took advantage of UCLA’s mistakes in the beginning. They do not make many of them and we did not have that many more opportunities afterwards.”

This is the second time in two weeks that the Matadors have played one of the top two teams in the nation after losing to the University of Oklahoma 11-0 on March 16.

The biggest difference between the two games was that the Matadors were able to keep up with the Bruins until the sixth inning, while the Sooners finished off CSUN by the fifth.

“In both games, we played a couple innings very tight and well and were aggressive,” Flowers said, “and I think there’s just a time where the other team feels like they are going to make things happen and they put some pressure on our defense. I think both times we saw some good things and then we need to make adjustments sooner.”

The team begins conference play at UC Davis March 30-31 before heading to CSU Fullerton April 5-6. They will then come home to play their conference home opener against UC Riverside April 13-14 at Matador Diamond.