‘The Voice You Deserve’ candidates want to ensure every student’s voice is heard, represented and advocated 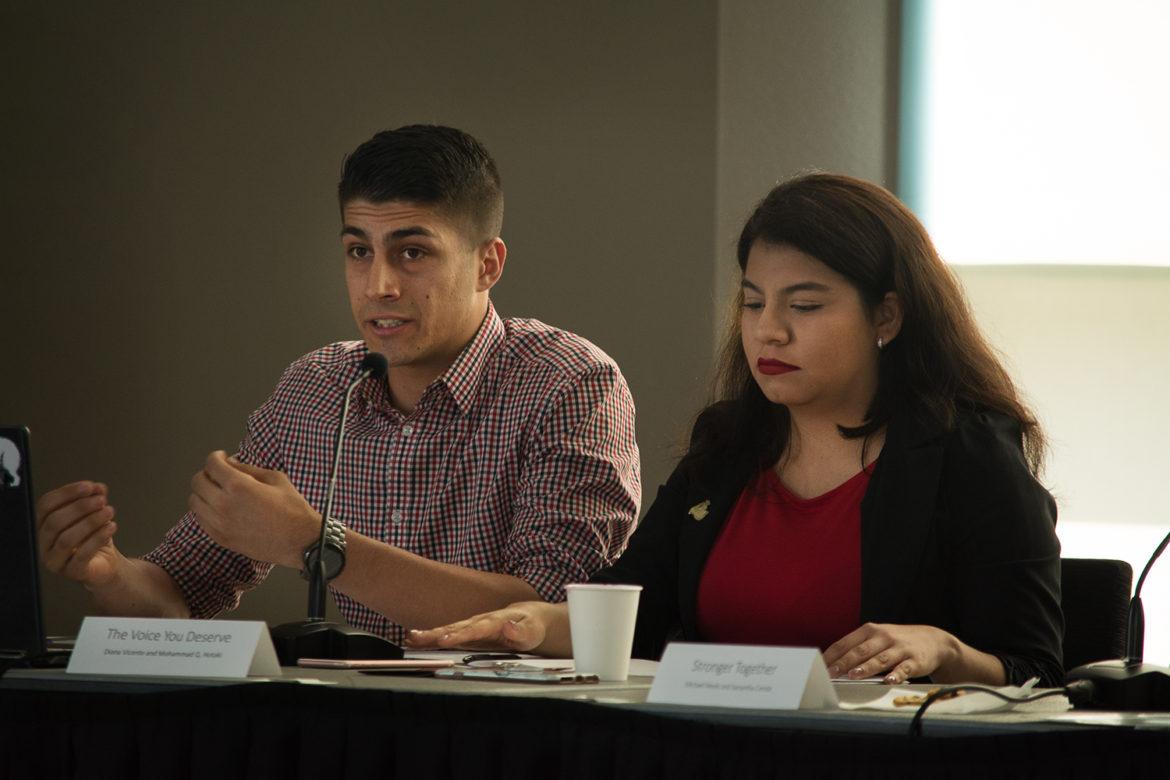 Candidates Mohammad Hotaki and Diana Vicente representing "The Voice You Deserve" slate at the AS Debate in the Grand Salon on March 26. Vicente is running for president while Hotaki is running for vice president. Photo credit: Joshua Pacheco

Accessibility and Affordability, Innovation, and Progress and Advocacy are the defining concepts behind the campaign for president and vice president candidates Diana Vicente and Mohammad Hotaki of the “Voice you Deserve” slate.

Vicente has been involved with student government since middle school when she served as liaison between teachers and Spanish-speaking parents and is excited to be the only Latina female running for AS president.

“I was born in Mexico and moved here when I was 10 years old knowing very little to no English, I had to learn everything from scratch, so being able to say that exactly a decade ago I was learning English and now here I am wanting to give students a voice is something I’m very excited about,” said Vicente.

Hotaki says his time as a sergeant managing up to 30 marines in the United States Marine Corps has prepared him for the role of AS vice president.

“When I transferred it was difficult for me to be involved, that’s why I’m trying to make that change,” said Hotaki. “I have to supervise 15 to 30 marines under my care and the role of vice president is to mitigate and have a cohesive interaction between the senators … My experience as a leader in the military has and will help me incorporate what I’ve learned there as AS vice president.”

Vicente and Hotaki are running their campaign on a platform composed of ideals: Access and Affordability, Innovation, and Progress and Advocacy, instances of which they’re looking to bring to CSUN.

Some of their concepts for Access and Affordability include a book voucher program to help a number of students receive a $200-300 Matamoney gift card aiming to alleviate students of financial hardships and an emergency housing program that would have a number of dorms available for emergency use if a student was to lose their home.

“We want to make sure our students are preoccupied with their classwork, getting involved and bettering themselves … rather than have them worrying about where they are going to sleep or what they are going to eat,” said Vicente.

In terms of Advocacy, Vicente would want to give students the opportunity to be advocated for on a local, state and nationwide level.

According to Hotaki, their slate is different from the other campaigns by having a diverse group of senators that help bring in different experiences and help incorporate ideas that provide better options on ways to convey change.

“If we’re going to make a change for the better of CSUN we want to make sure we’re being heard not only here by faculty, but also with the state representatives and nationwide advocacies,” said Vicente.