PaleyFest 2019: A year of representation 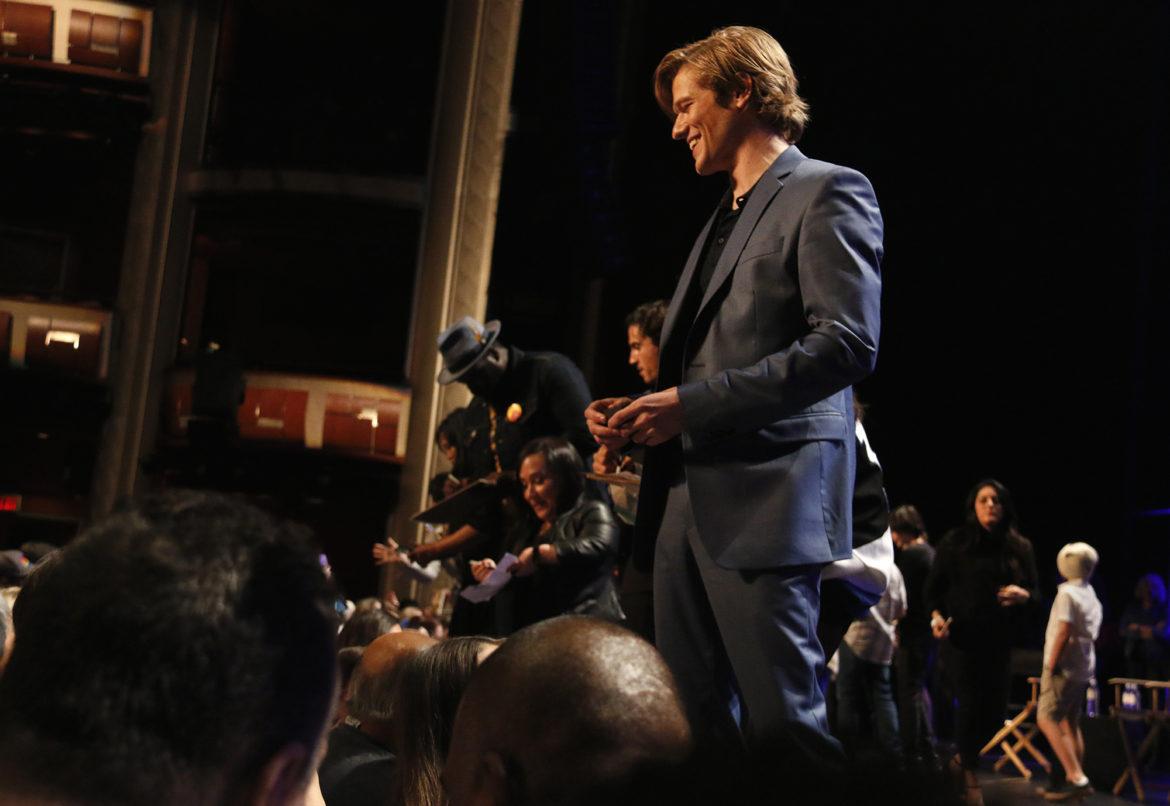 Lucas Till, star of the latest "MacGyver" reboot, greets fans who swarmed the stage of the Dolby Theatre after a PaleyFest panel on March 23. The panel featured the casts of "Magnum P.I.," "Hawaii Five-0" as well as "MacGyver." Photo credit: Clare Calzada

PaleyFest, presented by The Paley Center for Media, took place this past week from March 15 to 24. The star-studded event was held at the Dolby Theatre in downtown Los Angeles, near the El Capitan and Pantages Theatres.

PaleyFest is an event where stars have a chance to discuss their show while also interacting with the people who appreciate them, their fans. Shows that attended the event ranged from “Parks and Recreation” for their post-show reunion, “The Marvelous Mrs. Maisel,” “Pose,” “9-1-1,” “Jane the Virgin,” “Crazy Ex-Girlfriend” and a whopping three-show panel with cast members from shows “Hawaii Five-0,” “MacGyver” and “Magnum P.I.”

The Sundial attended some of the panels throughout the event and got to speak with some of the cast members as well. The “9-1-1” cast spoke on Sunday, with star and executive producer Angela Bassett leading the talented ensemble cast. Among the cast, there was Peter Krause from HBO’s “Six Feet Under” fame, Rockmond Dunbar from Showtime’s “Soul Food” and Jennifer Love Hewitt.

The show “9-1-1” is a drama series that follows the stories and events of various LA first responders that range from police officers to firefighters and paramedics. The show centers around Bassett’s character, Athena Grant, who’s an LAPD patrol sergeant and her family.

When asked how it was to work with film legend Angela Bassett, Dunbar, who plays Sergeant Grant’s ex-husband Michael Grant, said, “She’s so humble and so giving to be around and to share dialogue with and creativity with. With someone of her caliber and of her experience to be open enough to receive and play the ego without any preconceived notions of what you should be doing or what the scene should be. It’s a great flow.”

Dunbar also talked about being at home when it comes to the Fox Network.

“I’m at home y’know,” he said. “‘9-1-1′ has afforded me that pleasure of just being back with people that I love being with. I love Fox. They’ve taken care of me, and they have taken care of me for quite some time now.” Dunbar had been on the broadcast network prior on the show “Prison Break.”

Bassett’s character, Athena Grant, is a no-nonsense sergeant who tries to balance being a mother while also being able to be a leader to her team.

“There was a wonderful female lieutenant that I was able to sit down with and spend time with,” Bassett said when asked about how she prepares for her role. “She was very helpful and very informative about her journey through LAPD. She had been in there about 24 years. She was one of only two women coming through the Academy, and she was black. Now, she’s a lieutenant, and I met her at an event in South Central, and to see her comrades and the respect she has with her fellow officers who were all male. So I really liked that and how she handled herself.”

Bassett also spoke about going to the firing range to practice for shooting guns on-screen. She gave some advice to young black creatives who wanted to break into the entertainment industry.

“I didn’t have a mentor,” Bassett said. “I had to imagine one, whether it be Rosalind Cash or Cicely Tyson. You know, I didn’t get a chance to meet them when I had aspirations of being an actor, but I did know that study was very important because I wanted to rise to the top. So whatever it takes to be your best, whether you study the acting through watching a movie or performances, or go the academic route and go to drama school, or join a class. Just find a place that inspires you and you’re able to be as vulnerable and strong as you need to be because being an actor is about bearing your soul, and you have to be very brave and fearless to do that.”

During the “9-1-1” panel, the cast talked a lot about the reception that the show has gotten since it started. First responders have said how much they’ve loved the show, and people who have relationships like Athena and her ex-husband Michael, who came out as gay, have come up to Dunbar and have given him hugs because of his depiction of a gay man who was once married to a straight woman.

The highlight of the night had to be when Bassett answered a question regarding why representation in media is so important.

“We all want to be represented,” she said. “To be heard, and seen, and to not be on the margins.”

Diversity and representation were a major theme of the panels throughout PaleyFest this year. In a year that movies like “Black Panther,” “Roma” and “If Beale Street Could Talk” have won awards, the festival this year had representation at the forefront.

Shows “Jane the Virgin” and “Crazy Ex-Girlfriend” had dual panels back to back for their final seasons. Both are shows that have showed representation in different ways.

“Jane the Virgin” showcases the Latino community going through everyday life situations, while “Crazy Ex-Girlfriend” gets rid of the stereotypical submissive Asian man trope and also tries to erase the stigma of mental disorders with the main character having borderline personality disorder.

A lot of what was focused on in the “Crazy Ex-Girlfriend” panel was on the main character Rebecca’s disorder and how audiences appreciated the representation.

In the “Jane the Virgin” panel, one of the many remarkable things that was said was by Andrea Navedo, who plays Jane’s mother, Xiomara Villanueva. She talked about what it was like to be able to play a woman who was battling cancer.

“So many fans have reached out to say, ‘Thank you for your portrayal of breast cancer because my aunt, my mom, my dad, or myself has been going through this, you hit the tone very well,’” Navedo said. “For me as a fan as well was very grateful to play a Latina character who is known for being glamorous and who got stripped down and deconstructed and really bare bones humanized.”

She went on to say that she loved being able to play the unglamorous side and to become human.

Another highlight was actress Yael Grobglas commenting on the fact that a majority of the head executives and directors on the show are women. In an industry where white males have dominated for so long, it’s astonishing to see the tide change and for women to be at the forefront of a television show.

On Saturday, PaleyFest had a jam-packed panel of three CBS primetime shows from the mind of Peter Lenkov. “Hawaii Five-0,” “MacGyver” and “Magnum P.I.” are all iconic ’70s reboots that have become blockbusters in the new millennium.

“Hawaii Five-0,” being the oldest of the shows, started in 2010 and has almost hit its 10th season, while “MacGyver” has three seasons and “Magnum P.I.” is the newest show to air, debuting in September of last year.

Being set in Hawaii, shows like “Magnum P.I.” and “Hawaii Five-0” call for showcasing Hawaiians going about their lives while police track down any crime happening around the island.

Talking with veteran Amy Hill, who plays Teuila Tuileta in “Magnum P.I.,” and newcomer Kimee Balmilero, who plays Dr. Noelani Cunha on “Hawaii Five-0” and “Magnum P.I.,” both know how amazing it is for there to be representation for Asian actors on this show.

“It’s important for me because I’ve played Hawaiian so much but I’m not,” Hill said. “I’ve played all kinds of different characters like Chinese, Korean and Filipino, and it’s always important to me that I be authentic as possible and they have a real person that’s on-screen.”

During the panel, Jay Hernandez, who plays the main character Thomas Magnum in “Magnum P.I.,” said these past couple of years of diversity being a “trend” in Hollywood isn’t a trend. He talked about having representation in shows being simply reflections of reality and reflections of what America looks like.

This sentiment was felt by everybody in the room, and everybody at the festival as well. Diversity making its way into the foreground is what people of color have been wanting for ages.

PaleyFest is a great way for fans, young and old, to meet their favorite celebrities up-close and personal, while still learning a couple of things about the entertainment industry in the process.