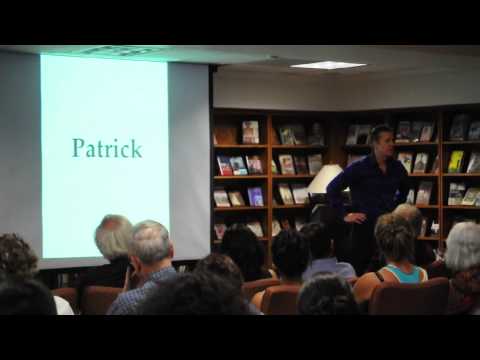 April 20, 1999 marks an unforgettable tragedy in the community of Littleton, CO. Eric Harris, 18, and Dylan Klebold, 17, walked into Columbine High School and shot and killed 12 students and one teacher before taking their own lives.

Ten years later, the question still lingers – why did they do it? Dave Cullen, author and journalist covering the story at the time, asked that very question to the audience gathered in the Whitsett Room, Wednesday night, Sept. 23 in Sierra Hall during the lecture, “The Murders at Columbine: How Our Culture Misunderstood What Happened.”

The lecture is part of the Richard W. Smith Lecture Series program created by professor Richard Smith through an endowment he established to promote cultural studies. Smith said he chose this speaker based on a review he read in Time magazine about Cullen’s book “Columbine.”

“I liked the book and thought it would probably be interesting to people at CSUN,” said Smith. “I was sad and shocked (when I heard the news of the shootings). I wondered why the heck did they do that.”

Cullen said people misunderstood Columbine, and asked the audience “Why did two boys walk into a high school and start shooting people in the head?”

Those in the room, including community members, students, professors and staff members, discussed what may have been the motivation behind the murders.

One audience member said recognition was their motivation. Another said the boys were outcasts seeking revenge on the jocks that bullied them. Someone else said violence in the media inspired the idea behind the murders.

“It had nothing to do with the Trenchcoat Mafia, or the jocks and they certainly weren’t outcasts,” Cullen said.

Cullen said the shootings were a terrorist act modeled after the Oklahoma City bombing in 1995. Klebold and Harris wanted to be known as the worst terrorists in history, said Cullen.

Cullen said Columbine couldn’t simply be told from one perspective.

“I don’t think there’s one truth,” he said. The lecture, as well as his book, focuses on the points of view of those people directly affected by the shootings.

A photo of a boy jumping out of a window to safety when the shootings were taking place was projected on a screen.

Patrick Ireland, the boy in the photo, was shot twice – once in the foot and in the head. Ireland was told it was likely that he wouldn’t be able to walk or talk again, Cullen said.

Cullen held up copies of the journals Klebold and Harris kept two years prior to the shootings. He showed the first page of Harris’ journal on the projection screen.

In bold, the word “hate” in scribbled writing stood out in the entry.

“Hate is pretty much on every page of this thing,” Cullen said.

The next slide showed a page out of Klebold’s journal. Crude drawings of hearts decorated the page. Another slide depicted drawings of roadmaps inlaid in hearts.

“He had a running theme with the hearts,” Cullen said.

In comparing Klebold and Harris, Cullen said that Klebold was “shy, he had very low self-esteem,” and the target of his anger was directed at himself and God. Harris in contrast, had very high self-esteem, Cullen said. He fit the description of a clinical psychopath and “had the ability to mask his psychosis – a villain in disguise.”

Cullen said, following the shooting, he went to Plymouth Park, located across the street from the school where children and media had gathered. When he arrived on the scene, he said he had entered onto “emotional chaos.”

It was the next day when he arrived to do a follow-up on the story that he became inspired to write a book.

“The next morning, I expected a muted version of the same thing,” Cullen said. Instead, he saw children, especially, “boys walking around like Stepford kids … emotionless, I thought they were lobotomized. It scared the crap out of me, I’ve never seen anything like it.”

Cullen said that “there is no useful profile of a shooter,” especially in this case. When compared with other school shooters, Cullen said they did have three things in common: they suffered a deep sense of failure or loss, the shootings were planned in advance and nearly all were boys.

Cullen said the media was responsible for the myths that circulated around after the shooting took place.

“Within four hours, most of the major myths were in place,” Cullen said, referring to the boys’ involvement with the Trenchcoat Mafia and the jocks who bullied them. He said it was the way reporters asked questions that fueled the stories.

During the question and answer session, Mindy Finkelstein, a 26-year-old UC Santa Barbara graduate, said she was a survivor of a mass shooting and applauded Cullen for discussing Columbine from a survivor’s perspective.

Finkelstein was a survivor of the Los Angeles Jewish Community Center shooting that also took place 10 years ago. She was shot in the leg.

She said attending this lecture was “uplifting” but doesn’t like that “it gives a voice to the perpetrator.”

Finkelstein said her experience and the experience of others, like the survivors from Columbine, inspired her to start her own outreach program. The program helps the healing process for victims of gun violence and educates the community about the dangers of gun violence.

Cullen said many of the survivors are just beginning to heal, 10 years later.

“Everyone has their own way of coping and their own timeframe to get over it,” said Cullen. “Don’t rush the healing.”