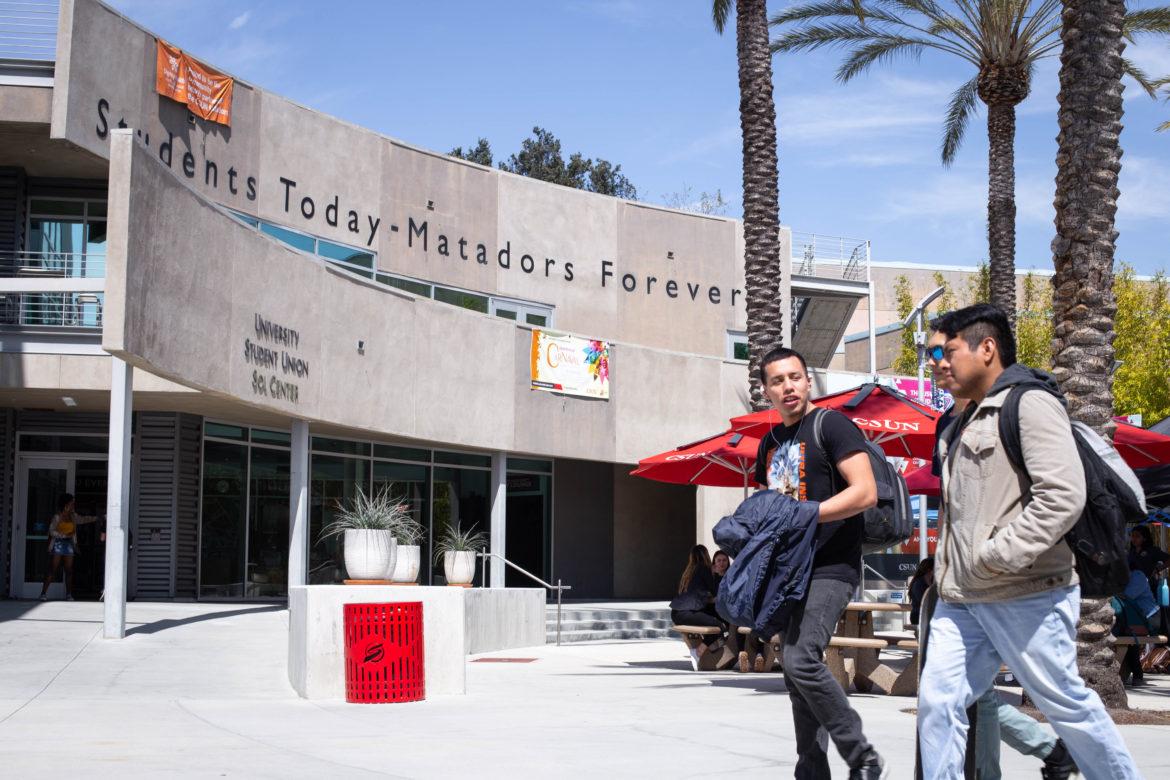 A group of students pass by the Sol Center in the University Student Union on March 26. Students will be able to vote for a new USU building to be built in the next few years. Photo credit: John Hernandez

Students will vote in May on the construction of a new University Student Union building that would relocate resource centers like the Veterans Resource Center, Pride Center and Dream Center all under one roof, as well as add a dedicated dining floor, event-focused space and new services.

The proposed three story facility would stretch from the eastern edge of Plaza del Sol to the East Conference Building in the USU, replacing the buildings occupying that space.

The building would cost students a fee of $125 per semester, beginning after the expected completion and opening of the building in 2022/23. This means that many of the students who vote yes on the building won’t be at CSUN by the time it is complete and fees begin being collected.

The fee would increase in increments of $3 during each fall semester, continuing on to pay off the cost of the building and any new services it begins to offer.

Debra Hammond, the Executive Director of the USU, says this construction is necessary due to the aging USU that has become more expensive to maintain than it would be to construct something new.

“The infrastructure part of it … in terms of how much it takes for us to actually physically maintain those buildings, is a lot,” said Hammond.

Members of the Cross Cultural Center Exploration Committee say that this building will fulfill a number of requests students made from direct involvement with the 2016 Student of Color Coalition. Requests were also made in a 2016 campus-wide survey that asked what students would like to see in a building like this and how much they’d be willing to pay for it.

The results led them to include new dining options, places to sit and study, gathering places and event spaces free for student use in the plan for the proposed facility.

“Students have complained to us, repeatedly, that they don’t have enough space inside our facilities,” Hammond explained. “Not clubs and organizations, students in general. Space to study, space to socialize, places to sit. They complain about Subway that only has two tables.”

Hammond went on to say that on average, an institution like CSUN should have eight to 10 square feet available per person in a Student Union facility.

“And we’re nowhere near that,” Hammond said. “We don’t necessarily have to get to that number. But I think we have to get higher than we currently are because when people come, there’s nowhere to sit.”

While the physical design of the building is still conceptual, one design the committee shared depicted a three story complex with an outdoor balcony and a top to bottom glass exterior, letting any passersby see inside the building at the staircases, floors and contents of the interior.

While two of these floors are dedicated to dining and event space respectively, the final floor’s contents, services and name are all still being debated in meetings just over a month from the student vote.

Preliminarily dubbed the “Cross Cultural Center,” the remaining floor of the building is set to house services like the Pride Center and Veterans Resource Center, but may also include spaces and representatives from each of the cultural clubs on campus.

Freddie Sanchez, associate director of Marketing and Programs at the USU, explained that even back when the project began originally, the committee paid attention to concerns that grouping cultural groups together would diminish their unique identities.

“We had an extensive conversation during the first couple meetings about the term multiculturalism and how that’s gentrified into a way of structuring and dismantling students of color and putting everyone under an umbrella,” Sanchez said at a meeting at the Chicanx House. “The concern of students at that time was if we were dismantling each other’s cultures and really being a melting pot and that’s not what they wanted to see.”

Members from many different cultural clubs on campus began attending weekly meetings alongside representatives from other affected centers where the mission statement, content and provisions of this final floor are under discussion to ensure this new facility wouldn’t override cultural spaces that currently exist on campus.

Among them, Holly Lin, an Asian American Studies Pathways Program intern, expressed concern that a designated “cross cultural” center might not have the same effect the cultural houses on campus have for the students visiting them.

“Would students like us be comfortable in approaching this ‘multicultural center?’” Lin asked at the meeting. “These houses are actually on the ground. They’re doing on-ground organizing. But if we’re put on the third floor … Is it accessible in terms of students connecting with the center?”

Hammond says that not all of the 19.8 percent of CSUN students who responded to the 2016 survey were specifically dedicated to the Cross Cultural aspect of the structure.

“We’re trying to do something that serves all students on campus,” Hammond said. “The Cross Cultural Center is a major component of it but it is not the entire program.”

Students will vote on the proposed facility on May 1 and 2, either through a prompt the USU will email to students or at polling places around campus.