UCLA too strong for the Matadors 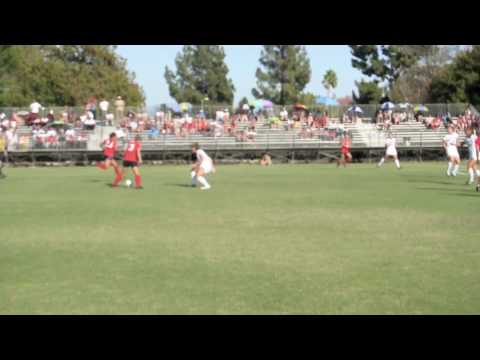 The CSUN women’s soccer team (4-6) lost 2-0 Friday to the No. 3-ranked UCLA Bruins at Matador Field. Despite playing without their top scorer, the Bruins had little trouble controlling play and peppering Matador goalkeeper Kellie Drenner with shots.

Early in the game, UCLA had three close calls. The first shot of the game was a bullet from about 30 yards out that struck the crossbar. Luckily for Northridge, the rebound came out to the Matador defense.

But at that moment, it became very clear what the Matadors were up against. The Bruins are a skilled, powerful and deep team with precision passing and a tough defense.

“It was rough,” CSUN freshman defender Stephanie Norton said. “They were hanging back real deep and playing comfortably.”

After the near-miss, it was only a matter of time before the Bruins were going to strike, and in the 18th minute they did. Senior forward Kristina Larsen beat a couple Matador defenders in the open field, creating a breakaway with only Katie Russ standing in between the UCLA player and Drenner.

Larsen made a move left and shot right. The ball deflected off of Russ and into the left corner of the net for Larsen’s seventh goal of the year.

Shortly after the goal, CSUN had one of its best chances of the game. Sophomore forward Heidi Farran made three successive crossovers, causing the UCLA defender guarding her to fall and opening up an alley for a shot that Farran placed just over the goal from 20 yards out.

“I faked the shot and cut left,” Farran said later. “I didn’t mean to hurt the girl.”

The fallen UCLA defender, Kara Lang, had to be carried off after the play, with an apparently-serious leg injury that kept her out the rest of the game. Elise Britt replaced Lang in the game.

But the UCLA defense seemed just as dominant, and at the 43-minute mark, the Bruin offense struck again, with senior forward Lauren Cheney putting a header into the right corner of the net off a cross from Britt. Britt and Whitney Sharpe were credited with assists on the play.

Despite being outshot 19-9, the Matadors did have a few highlights. CSUN got another solid start from goalie Drenner, who gave up just the two goals. Considering that one was off of a deflection and the other was amidst a lot of traffic in front of the goal, it was Drenner’s performance that kept Northridge in the game.

Northridge also got an unexpected contribution from Norton. After replacing Katie Fox mid-way through the first half, the freshman made an immediate impact.

“Stephanie was awesome, she gave us great energy off the bench,” head coach Keith West said, something that he’ll now have to consider giving Norton more playing time. “When you bring that much energy and effort, you have to keep feeding them (minutes).”

Norton wasn’t the only one who brought energy and effort; the whole CSUN team left everything it had out on the field. Despite battling against a superior team, the Matadors held their own, especially in the second half when they had seven shots to UCLA’s six.

The next step is to actually get a win for those efforts, which the Matadors will try to do when they begin Big West Conference play next weekend.

Northridge will host Cal Poly-SLO on Friday and then play host to UC Santa Barbara on Sunday. The Matadors might have a 4-6 record, but conference play is all that really matters, and that’s what they have to look forward to.