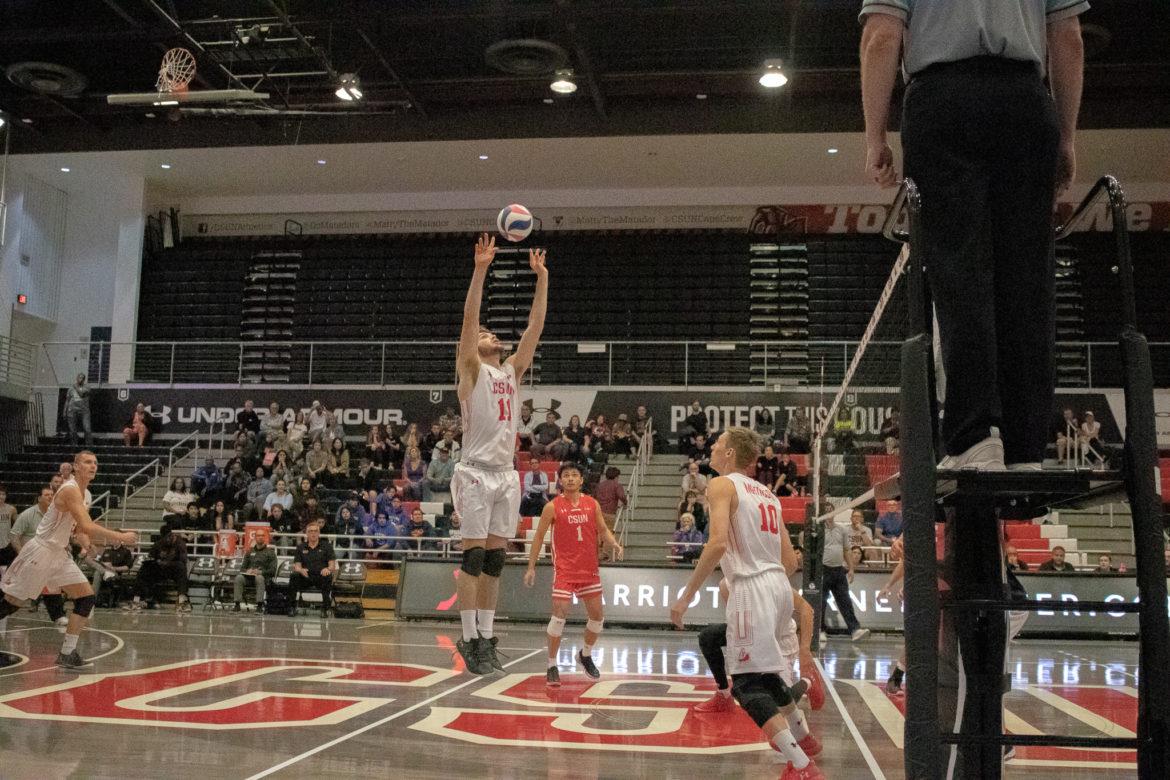 Freshman Taylor Ittner attempts to set up a teammate for a spike in the Matadors' loss to UC Santa Barbara on Saturday. Ittner had an impressive night, recording 47 assists and 19.5 total points despite his squad losing in five sets. Photo credit: Tyler Wainfeld

The men’s volleyball team narrowly lost to UC Santa Barbara in a five-set thriller by a final score of 3-2 despite redshirt freshman Ryan DeWeese getting a career-high 19 kills Saturday night at the Matadome.

The Matadors came into their matchup with the Gauchos having lost all five of their conference games thus far, while Santa Barbara was 3-2 and coming off a sweep of CSUN at home on Friday.

But nobody would have guessed that was the case after the first set was won by the Matadors (25-22) in commanding fashion as they pounded 14 kills while forcing eight errors from the Gauchos and holding them to just a .089 hitting percentage.

That win would be the first set won in conference play for the Matadors this season, having lost all 15 of their previous sets.

The second set would prove to be decisive as the Matadors were ahead for the majority of it until the Gauchos tied it at 24 apiece. Santa Barbara would then go ahead after a CSUN timeout before senior Dimitar Kalchev answered back with a kill and an ace to set up set point for the Matadors, though three straight Gaucho points gave them the set, including an ace to finish it off.

“They made a change in that they started to set in the middle a little bit and they setted (Brandon Hicks) a little bit and we didn’t really respond as well as we could have,” head coach Jeff Campbell said. “And I think it’s difficult. You get in a rhythm, and for sure our middles, they’re both freshmen playing for the first time, they just didn’t do a great job of adjusting to that.”

The Matadors wouldn’t let that get them down, though, as they came out hitting hard and fast, jumping out to a 13-4 lead in the third set. They would push on from there to win the set handily 25-17, with DeWeese leading the way with seven kills in the set to give the Matadors a 2-1 lead in the game.

“We were just one or two plays away from winning that set two,” Campbell said. “Theoretically, we could have won that (game) in three. We had a lead in set two.”

But that would be the end of CSUN’s barrage as the Gauchos came back to win the fourth set and tie the game at two sets apiece, setting up a showdown in the fifth and final set that, at least from a CSUN perspective, underwhelmed as Santa Barbara sealed the victory with a 15-9 win.

“We played better (compared to Friday),” Campbell said. “We’re a little more comfortable at home than we are on the road, so our service and setting and passing was a little bit better. You got to give Santa Barbara credit. They’re the No. 3 team in the country.”

It wasn’t a secret as to how the Gauchos were able to get back in the game and eventually win, as they picked up their play when it mattered most, hitting a combined .409 in the final two sets while holding CSUN to just .079 hitting in those same sets.

Despite the poor finish, Campbell was able to see the bright side, as both DeWeese, with a career-high 21.5 points and 19 kills, and redshirt freshman Taylor Ittner, with 47 assists, played well together up front to lead a very young Matador squad, a good sign for the future of the program. Those numbers for DeWeese were also game highs.

“It’s disappointing, for sure, but we had four freshmen starting out there and those guys, it’s a learning experience for them,” said Campbell. “I feel good about our team right now and even though we did lose, part of what we’re trying to do is making sure everybody stays up as a learning experience and trying to get better and for the most part, I think we did.”

After the loss, the Matadors’ record sits at 10-12 (0-6 Big West), though Campbell feels that that is not quite indicative of what kind of season his team has had so far.

“It’s tough,” Campbell said. “The first two matches we played in the league were against the No. 1 team in the country (Long Beach State) and then we played the No. 2 team in the country at Hawaii, and they were really good, and Santa Barbara is good too. So you can’t lose sight of who we’re playing. Yes, we are technically 0-6, we are what our record is, but we’ve lost to really, really good teams.”

With opponents like that, it is not hard to understand why CSUN has had such a tough time winning games within their conference, but it could get easier as they go up against UC Irvine (14-9, 2-4 Big West) next weekend.