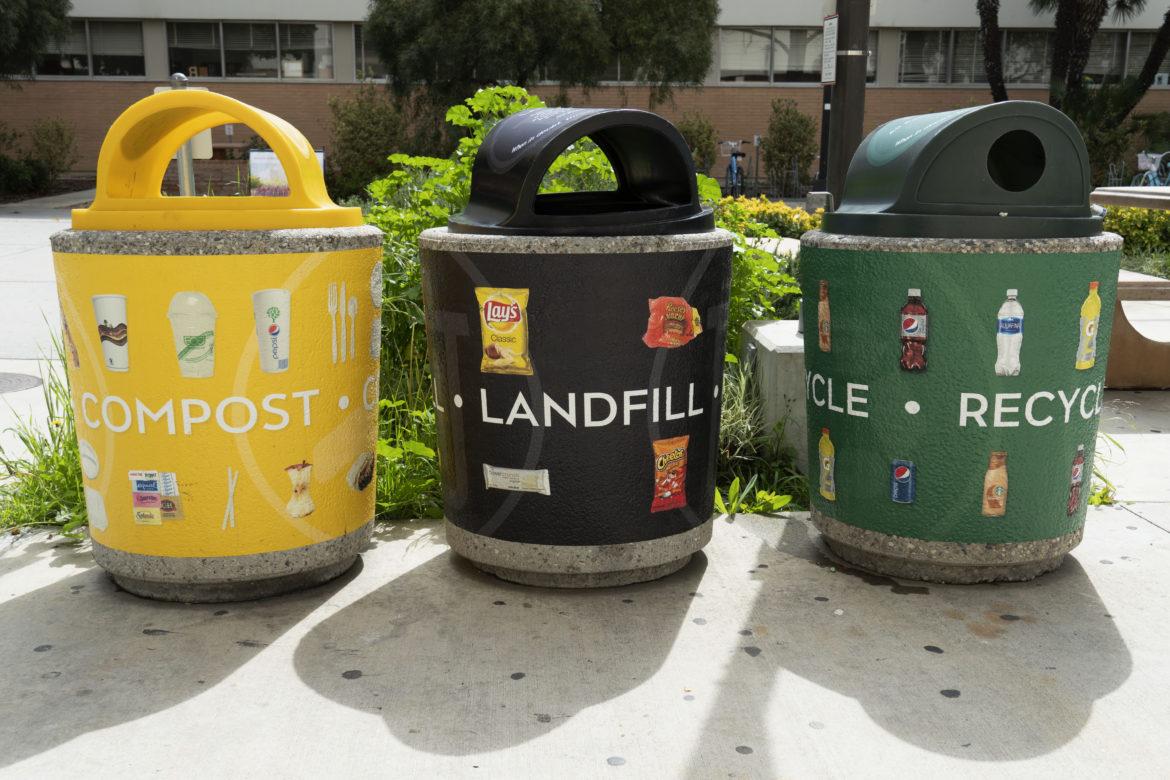 CSUN’s Sustainability Center and its partners have created a zero-waste campaign at CSUN in an effort to reduce the amount of waste that’s generated on campus and sent to landfills.

In a joint collaboration, CSUN’s Sustainability, University Student Union, University Corporation, student housing and Associated Students came together to develop a plan that ties in with the university’s overall sustainability goals.

The objective by 2020 is for all 23 CSU campuses to eliminate 80 percent of their waste from going to landfills. The zero-waste campaign sets CSUN’s goal to 95 percent waste elimination from campus to landfills by 2025.

“It’s a pretty ambitious goal,” said Austin Eriksson, director of Energy and Sustainability. “I’d say that as of now, 40 percent of waste that is generated on campus leaves and goes directly to the landfill and sits there for eternity.”

The strategies that the sustainability center has to achieve zero waste on campus is to implement trash separation bins throughout the university, utilizing the campus food recovery network and turning the campus’ food waste into fertilizer for the CSUN garden.

According to CSUN’s waste and materials management site, campus waste generation amounts to approximately 70 pounds of waste per person annually. This amounted to more than 1,430 in 2011, according to the campus sustainability plan.

Last year the Sierra Center introduced the zero-waste campaign as a pilot program to evaluate the effectiveness of transitioning the facility to zero waste. One of the changes that the center underwent was to implement trash separation bins. Three trash bins now give people the option to either throw away their garbage in bins labeled landfill, recyclables or organic compost.

CSUN’s food recovery network was another tactic involved in achieving zero at the Sierra Center. This program takes unsold food for the day to the campus food pantry or homeless shelters. In 2018, more than 20,000 pounds of food was recovered by the program, according to CSUN’s College of Health and Human Development website.

“An astonishing amount of food gets thrown away every day in this country,” said Eriksson. “If you look at the stats it’s pretty ridiculous.”

Tim Killops, the associate director of Facilities and Operations, said that the Sierra Center held multiple opportunities for the zero-waste campaign along with the University Corporation who worked to obtain compostable packaging for the food they prepared and served. Cooks were also trained to set aside food trimmings from vegetables and fruits, allowing food packaging and trimmings to be collected as compost to later be processed into organic dirt to use in the campus food garden.

Geronimo’s restaurant in student housing was another food facility part of the zero-waste pilot program. Compared to the Sierra Center, Geronimo’s is the closest facility that’s near the zero waste goal, according to Killops.

“We make about 2,000 meals a day and we use plates and silverware at our facility, so as it is there isn’t a lot of waste at the end of the day,” said Philip Valdez, residential dining manager of Geronimo’s.

As the zero-waste campaign begins, many of the changes that the Sierra Center and Geronimo’s underwent will begin to be more apparent across campus.

Ronaldo Valiente, the recycling field supervisor for Associated Students, said that in addition to the separation bins, the use of reusable containers for purchasing food on campus is also something the campaign will begin to encourage more in the near future.

The ambitious goal that the university set for itself over the next few years comes with its share of challenges. Supervisors of the campaign say that educating the students and faculty are going to be key to the success of the program long-term. Valiente said that people don’t always dispose of their trash into the appropriate bins.

Additionally, expanding the waste infrastructure is going to be another challenge for the campaign, as only 25 percent of the buildings on campus have the multi-labeled trash bins, according to Eriksson.

“I’m hopeful,” said Eriksson. “Spreading the message is step one and hopefully people like what we come up with. It should be fun and make waste not so boring.”