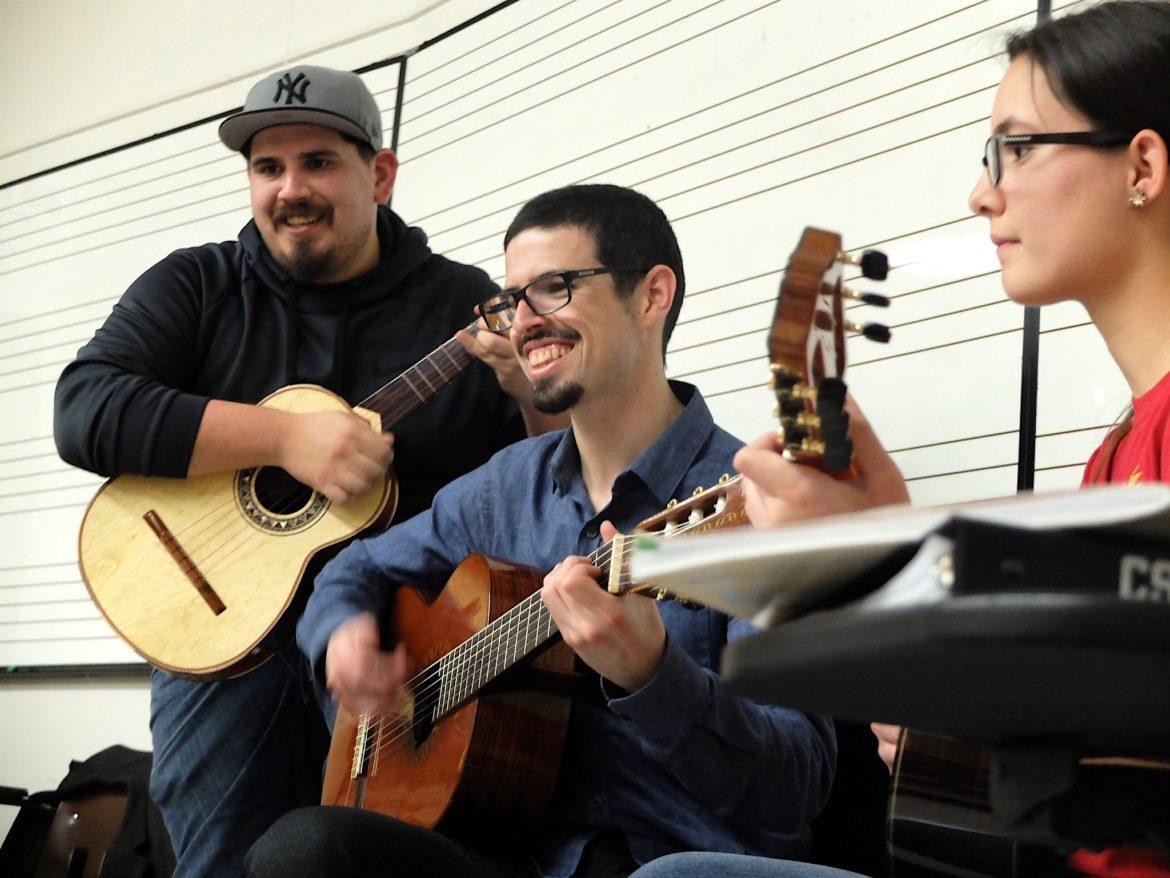 Mariachi is a small musical ensemble that originated in Jalisco, Mexico. Composed mainly of a variety of mostly stringed instruments, it is a mixture of Spanish, native and African traditions, and differs from region to region.

Though mariachi has long been considered a uniquely Mexican sound, Carlos Carrasco, the student director of the CSUN Latino Music Ensemble, encourages anyone to join in with their instrument of choice.

“The more instruments, the better the song!” he said.

Carrasco started playing when he was 5 years old after begging his mom to buy him a guitar he found at a garage sale. He has consistently played the guitar and the vihuela ever since.

“I’ve been heavily influenced by Pedro Infante,” Carrasco explained. “As a kid, I didn’t like his music ’cause it reminded me to clean because that’s the only time my mom would play it, but overtime it passioned me to continue because I would always see my mom smile when she played it … to watch my mom smile every time I’m playing, that’s amazing.”

The CSUN Latino Music Ensemble started nearly 10 years ago as a Latin-fusion-focused group. It changed over time from jazz to cumbia until it landed on mariachi. Students from all backgrounds join the group for many different reasons.

“Some are musicians, and some are there to just see the music that reminds them of their parents,” Carrasco said. “We also get spontaneous visitors. One day a professor walked in in the middle of a song and just started singing. She said the music reminded her of her mother and grandmother.”

The ensemble, run by Carrasco and Chicano/a Studies Professor Peter Garcia, is a club but they’ve started paperwork to potentially get the university to approve it as an official class.

“CSUN is a very diverse school. More than half the student population is a different ethnic race which brings a lot of culture here,” Carrasco said. “With mariachi, there are a lot of songs derived from diverse ethnic cultures. It’s very important because it voices the people that seem like (they) don’t have a voice.”

The group consists of 12 musicians with five instruments: violins, trumpets, the guitarrón, guitars and vihuelas. Some groups add harps, and accordions depending on what songs they’re playing.

“There is no limit to how many instruments can play,” Carrasco said.

The ensemble meets every Wednesday at 3 p.m. at CY 217. Contact Carrasco at carlos.carrasco.94@my.csun.edu for more information.