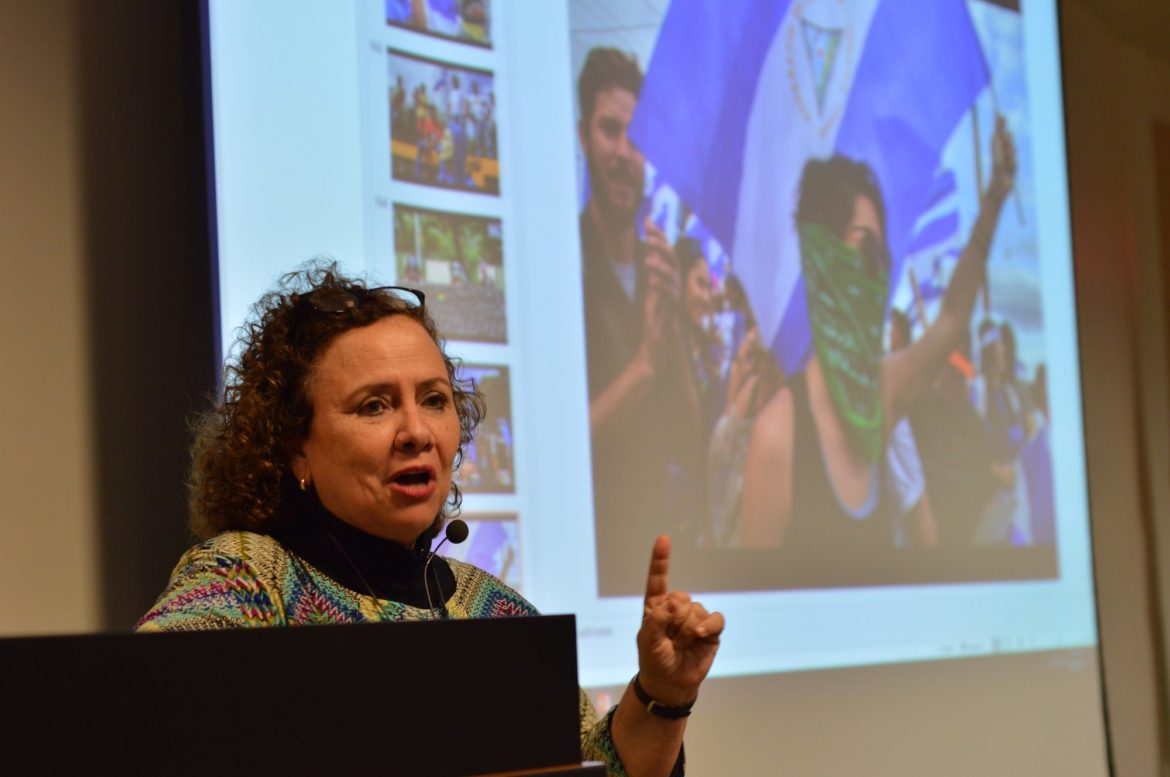 Photojournalist Margarita Montealegre presents her photographs from Nicaragua and other Central American countries at the Oviatt Library on March 29. Many of her photos show important events that happened during both the Nicaraguan and Salvadorian civil wars. Photo credit: Geovanni Botticella

Margarita Montealegre presented many of her photographs she has taken over the years and explained her struggle of being the first female photojournalist during her presentation at the Oviatt Library on March 29.

She displayed her photographs taken during the Nicaraguan civil war in the ’80s to her photographs of protest in Nicaragua today. For all the work she has done she said people doubted her from the very beginning.

“They (male colleagues) told me I couldn’t make it as a journalist,” Montealegre said. “I wouldn’t make it because I was a woman and women can’t stand too much violence or they can’t deal with the police and everything. But I did.”

During her first job working with La Prensa, an independent newspaper based Nicaragua, she said she was determined to prove them wrong and began documenting major events during the civil war in Nicaragua. She displayed shocking photos of survivors of bombings and of revolutionary soldiers in combat.

Montealegre stopped to talk about one photo that had greatly impacted her. The photo showed a woman who was in a building during a bombing and was covered in blood.

“For me it’s one of the strongest experiences I ever had and I covered many different types of violence in Nicaragua,” Montealegre said. “I didn’t know who she was and if she was alive after that.”

It wasn’t until several years later that she found out that the woman died shortly after she took the photo.

After discussing a few more photographs she began to talk about other projects she’s worked on. She explained that after the civil war she became a wedding photographer in the U.S., began documenting the lives of women who were killed in Nicaragua and even started photographing celebrations for young girls with cancer.

When asked what it was like working as a female journalist and being surrounded by men, she said she had to push her vision and experience into her work little by little.

“I had to take pictures but I have my vision and I had my own experience as a woman and so I see things a little bit different than men,” said Montealegre. “I wasn’t very conscious about it, though. I wasn’t thinking ‘I will be the first woman journalist.’ I had to live with that every single day in order to survive when people would tell me ‘you’re not going to make it.’”

Editor’s note April 6: The headline was corrected to state that Margarita Montealegre is the first female photojournalist of Nicaragua.