‘The Voice You Deserve’ candidates elected president and vice president 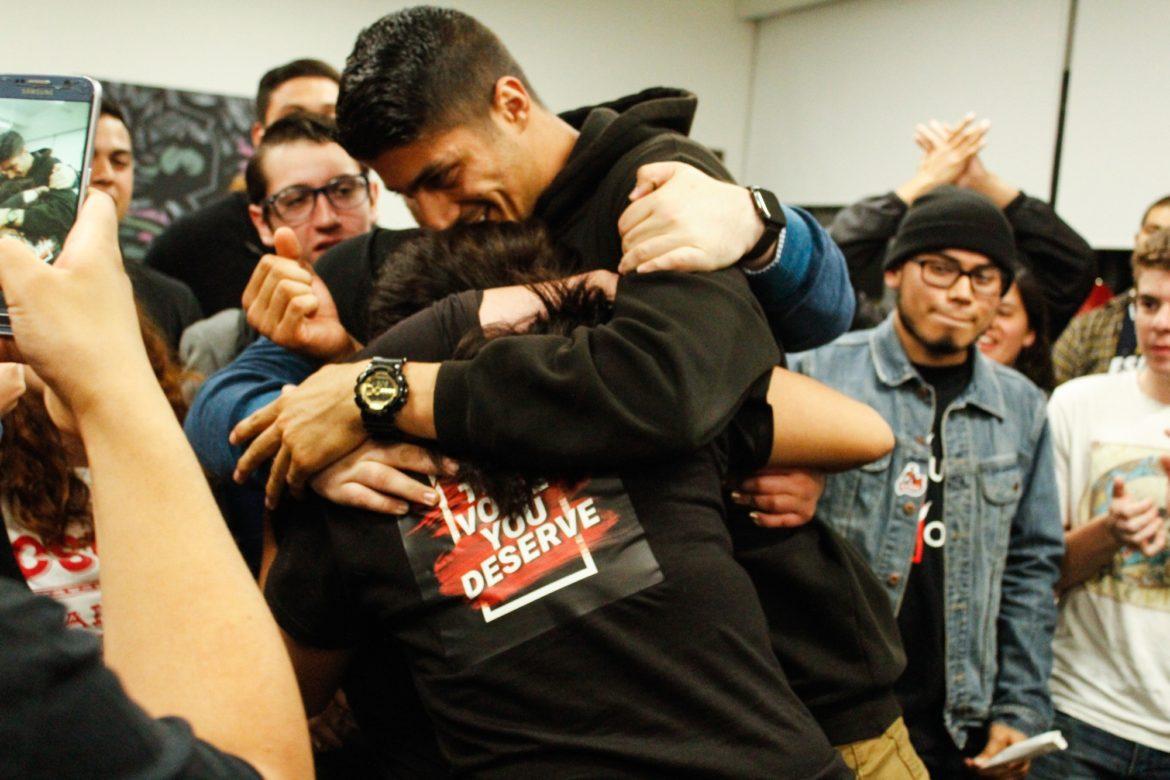 “The Voice You Deserve” Diana Vicente and Mohammad Hitaki celebrating their win in election becoming the new AS President and Vice President with 2,225 votes on Thursday night. Photo credit: Elijah Carr

Cheers and applause resonated inside the Sustainability Center Thursday night when it was revealed that “The Voice You Deserve” slate candidates, Diana Vicente and Mohammad “Q” Hotaki, were elected AS president and vice president for the upcoming academic year.

After their intense and grueling hard work, Vicente and Hotaki found themselves overjoyed after hearing they’d been elected AS president and VP.

“I’m so excited, I’ve been waiting and preparing for this for a really long time and it’s here so the hard work really paid off,” Vicente said.

Vice president-elect Hotaki, ecstatic with the results, credited Vicente, and his slate’s campaigning strategies and determination throughout the past two days as resourceful and expressed excitement to start this new journey for the students.

“I’m so excited to take up this opportunity and I’m more than happy they’ve allowed us to have this chance to give back to them to represent a various diverse community,” said Hotaki.

Zahraa Khuraibet, former AS vice president and campaign manager for “The Voice You Deserve,” expressed being proud of Vicente and Hotaki because she knew both of them were ready to take up the position and responsibility of being AS president and VP.

“I knew that the student body needed someone that cared, someone that was ready and had experience and working with Diana and being her boss last year and knowing Mohammad I knew they were a match and were ready for this,” said Khuraibet. “Their passion and dedication were evident and I knew I had to invest in campaigning for them.”

Warren Yee, AS chair of elections, said voting had a big turnout this year compared to the 2018 elections. Out of the 33,682 students eligible to vote, 5,778 voted.

“The (voting) turnout was big, one of the biggest ever … last year 13% of students voted compared to this year’s 17%,” said Yee. “There was a lot at stake for students with the referendum fee increases and what would have to be cut would have had an astronomical impact for students had they not voted.”

The Instructionally Related Activities fee passed with 3,072 votes, the Student Health Center fee passed with 3,520 votes, and the AS fee passed with 3,421 votes. Each fee increase is a mandatory, campus-based fee which all students pay each semester. These increment in funds will help IRA, the Student Health Center, and AS in helping to support clubs and organizations, aid to keep the SHC’s physical therapy, pharmacy, and dental services, and help AS for services such as Big Show, Big Lecture, and the Farmer’s Market, according to the AS referendum document.

“In my heart, there was no doubt the referendums would not pass, we’d been putting off these fee increases for a really long time and with the budget being the way it is we would have had to cut down on a lot of things,” said Yee. “The referendums won by a big margin so a lot of students really cared.”

Both Vicente and Hotaki plan to implement programs they know will benefit CSUN students, such as a book voucher program that will relieve students of financial hardship when buying school books, and just hope to do right by the students.

“We’re excited, we’re ready, and we want our students to have communication with us, just because we won does not mean we’re any different or that we’re going to stop communicating with them,” said Vicente. “We’re going to listen to what they want and make the changes we believe in for them.”