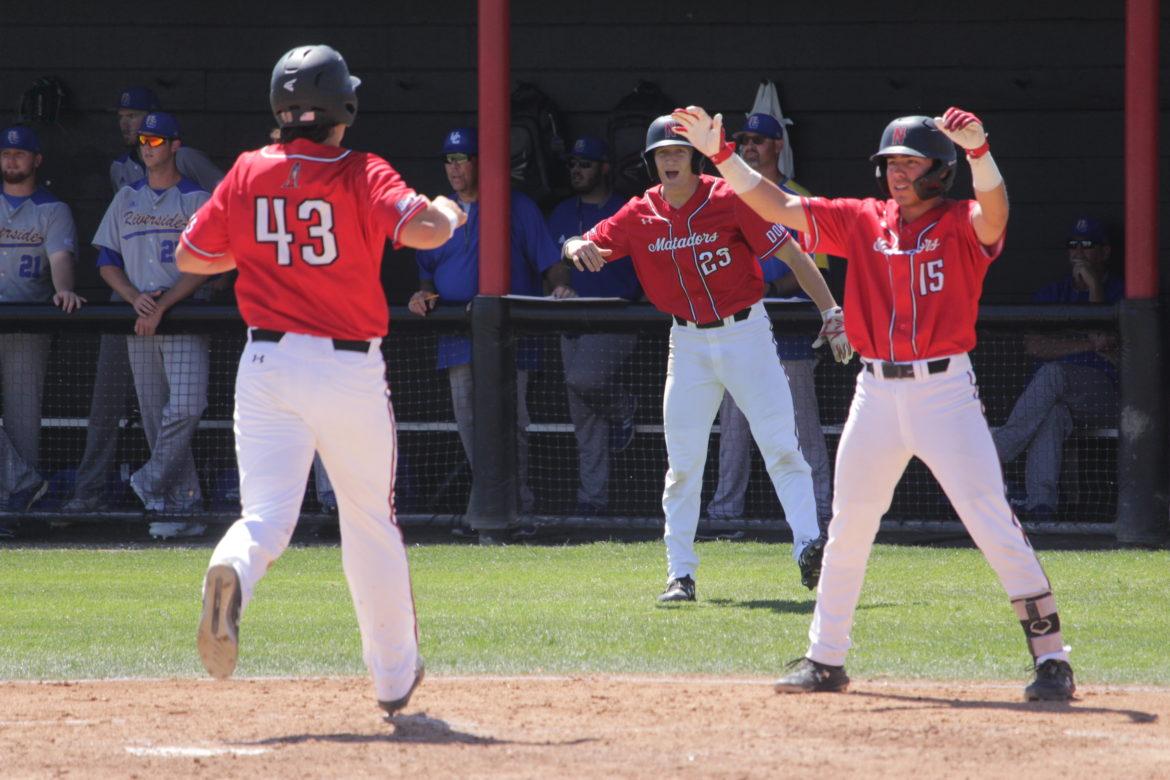 Andrew Lucas (23) and Jose Ruiz (15) cheer on Wesley Ghan-Gibson (43) as he crosses home plate in the third inning of Sunday's game against UC Riverside. The Matadors tied a school record for runs scored in a Big West series with 50 in the sweep over the Highlanders. Photo credit: Chelsea Hays

The baseball team had a historic weekend as they scored 50 runs, tied for their most ever in a Big West series, in their three-game series sweep over UC Riverside this past weekend at Matador Field.

They tied the record first set against the University of Pacific in 2003, while also pulling back to .500 in conference play after being swept at Cal Poly in the conference-opening series.

“When you get swept, you have to do something to get back in the race,” head coach Greg Moore said. “I think we got back in the mix. We just need to keep getting better and play good baseball in this stretch.”

This series against the Highlanders started off on a high note with a 14-5 victory on Friday, giving CSUN its first conference win of 2019.

Sophomore Wesley Moore got the start on the mound and earned the victory, going 5 2/3 innings and giving up seven hits and four runs while striking out four batters.

Moore had the offense to thank for picking him up when he wasn’t on top of his game as they batted around the order in the first inning, plating six runs to give Moore some breathing room. The second inning was the same story as the Matadors batted around again, this time scoring four times as their lead swelled to 10 heading into the third inning.

That much time on the bench while the offense is rolling can disrupt a pitcher’s rhythm on the mound, so it isn’t hard to understand why Moore may have been subpar on the day as he had to find different ways to stay ready as he waited his turn on the mound.

“I told him after the game that this was the most enjoyable outing for me to watch,” coach Moore said. “He didn’t have his best stuff. He didn’t have good stuff. He battled, he didn’t try to do too much, he continued to pitch. This was one that he’ll learn a lot from.”

Junior Sean Skelly was the star at the plate as he went 3 for 4 with two home runs, five RBIs and three runs scored as he helped key the offensive outburst.

“I think it’s huge,” Skelly said about hitters consistently getting on base in front of him. “(Kyle Barret) and Rob (Bullard) did a great job (at the top of the lineup). They were getting on it. It’s just that (pitchers) are trying to throw strikes. If a guy is on second, they don’t want to bounce one, have it get by. And then there’s a guy in scoring position, it’s a lot easier to just focus on one job instead of trying to create something with nobody on.”

The second game saw the Matadors break another school record, this time scoring the most runs ever in a Big West game in Saturday’s 25-1 victory.

Senior Isaiah Nunez was the starter in that game, recording eight strikeouts and giving up just five hits and one run in six innings to earn his fifth victory of the season.

But the story of the game was the offense as 13 of the 14 CSUN batters scored at least once while 10 recorded at least one hit. Freshman Andrew Lucas keyed the offensive explosion, going 4 for 6 at the plate with a home run, a double, six RBIs and two runs scored.

“I just saw the ball well,” Lucas said. “I was staying in my legs a lot and I let the ball travel. I saw it well. Just did my thing, tried not to do too much and just let it take care of itself.”

More impressive was that Lucas finished the game on the mound, pitching a scoreless ninth in what was just his second pitching appearance on the season.

“No (I wasn’t nervous),” said Lucas. “I’d been up (on the mound) before in high school and I had an outing at (Washington State), kind of got the nerves out there. I felt at home in there. It was sweet. I felt good.”

The final game of the series also saw the Highlanders play their best baseball of the weekend as they put together six runs, though it wasn’t enough as CSUN won the game 11-6 to secure the series sweep.

Freshman Blake Sodersten got his first win of the season as he went six innings and allowed seven hits and two runs while striking out eight batters.

Riverside was able to push through once Sodersten came out, with freshman Blaine Traxel giving up five hits in as many batters before fellow freshman Dwayne Angebrandt gave up a three-run home run as the Matador lead was cut to just four after being up by 10 going into the seventh.

Sophomore Blake Schriever would be called on to shut the door on what had suddenly become a high-powered Highlander offense and he answered the call, retiring three of four batters in the seventh before shutting the door in the final two innings to earn his seventh save of the season.

“He’s so steady,” Moore said. “You bring him in when you need pitches made. Blake does that for us every outing.”

Skelly was given the day off from catching and served as the designated hitter for Sunday’s contest as sophomore Victor Cerny got the start behind the plate and he ran away with the opportunity, going 2 for 4 with a home run, a double and four RBIs.

“I felt good today,” Cerny said. “But obviously guys getting on base in front of me really allowed me to do that. The whole team played great.”

Senior Kyle Barret was the main catalyst for the historic offensive showing throughout the weekend, getting on base in 11 of his 15 plate appearances in the three games, including a perfect 6 for 6 in the opening game on Friday, setting the table for the hitters after him to bring him home.

“I was just trying to see pitches and help the guys behind me get on base,” said Barret. “It feels good to come home. I think our offense plays better at home, so that was good … Now hopefully we can take some of that confidence into Long Beach.”

After the series sweep, the Matadors’ record sits at 14-17 and 3-3 in Big West play, good for fifth in the conference.

The sweep comes just a week after CSUN was swept at Cal Poly in their conference-opening series, something sophomore Brandon Bohning chalked up to “jitters.”

“I think it was a learning experience that first weekend,” Bohning said. “Just some of the pre-game jitters affected the team a little bit. But it was good to come out here in front of the home crowd and get some wins.”

With those jitters now behind them, the Matadors can look to jump up in the standings as they go on the road for a three-game series with Long Beach State from April 12-14 before another series on the road against UC Irvine from April 18-20.

They will then have a midweek game at Cal Baptist on Tuesday, April 23 at 6 p.m. before finally coming home for a three-game series against Hawaii from April 26-28.