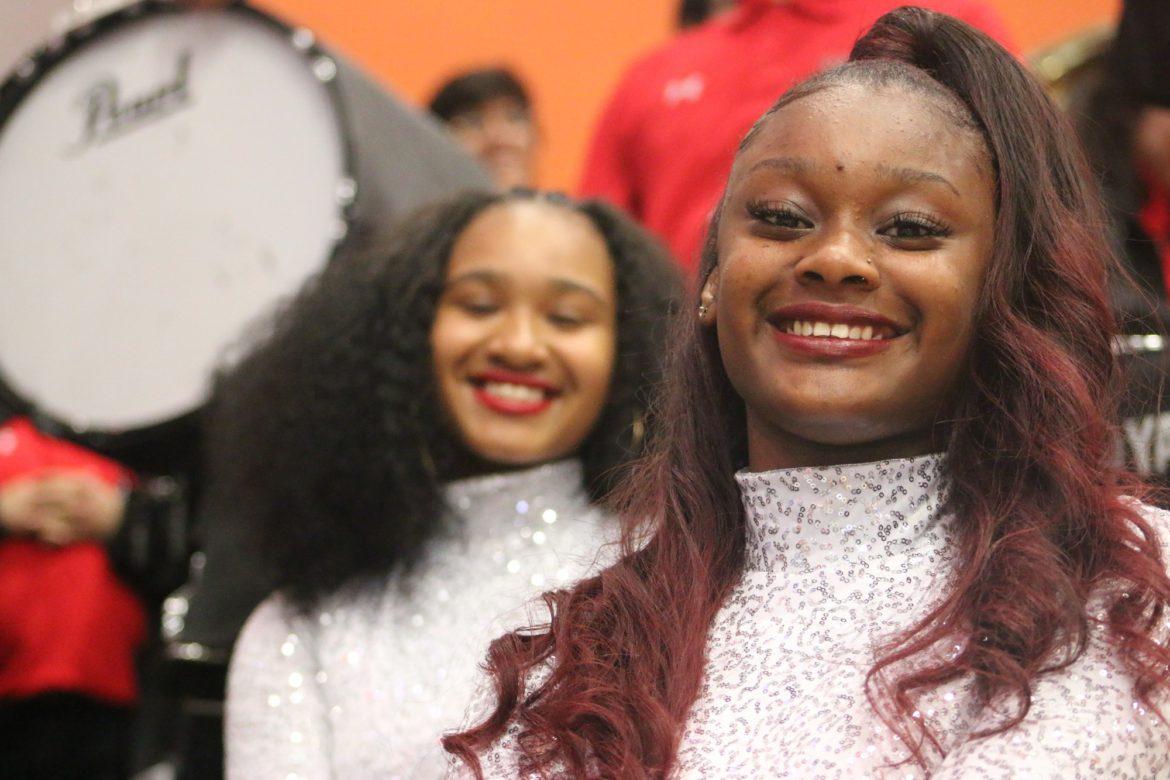 Amayah Williams and Air-Re-Onna Stone smile at the camera during the women's basketball vs. UC Irvine game at the Matadome on March 6. Photo credit: Emmanuelle Roumain

Kyle Wallace-Jordan wasn’t planning on pursuing dance when he started the lengthy process of forming the MataDolls at CSUN.

“I was inspired by this TV show called ‘Bring It.’ I watched it when I was sitting in my dorm and I felt like I could do everything she was doing and everything on the screen,” said Wallace-Jordan. Majoring in communications and Africana studies, he made room for his long-term passion by becoming a dance coach for his squad of majorettes.

Majorettes commonly accompany a marching band, and are most commonly known for twirling batons as well as performing cartwheels and flips. The MataDolls bring in their own flare, with energetic fast-paced movements and lots of stunts.

During a basketball home game, you’ll notice the MataDolls wearing sparkly white skin-tight crop tops, short shorts and red gloves at section 10 of the bleachers in the Matadome. The MataDolls kept the upbeat vibes alive with their dance moves at the women’s basketball game against UC Irvine, sliding back into their seats at the end of a performance with a choreographed body wave.

When I asked Wallace-Jordan why the MataDolls stayed on the bleachers instead of being on the basketball court like the other dance teams, he explained that majorettes are usually at football games accompanied by the marching band. Having majorettes at a basketball game is not as common and this is the way they’ve made it work.

The audience engaged enthusiastically whenever the MataDolls were called to dance, but getting the dance team to be fully embraced by CSUN hasn’t been without obstacles.

“We weren’t getting treated as well as other dance teams. We perform for three hours, three days a week, getting sore and putting a lot of work into our routines, and they weren’t giving us enough performance time,” Wallace-Jordan said. “Some of the stuff was surprising, like I’d prepare our music ahead of time and edit it to make sure it was clean, and they’d tell us it wasn’t clean so we couldn’t play it. I knew it was clean, I spent a lot of time editing it ahead of time.”

The tension has calmed down since Wallace-Jordan and his entire dance team met with the athletics department to talk about these issues. After a long amicable talk, the dance team felt that they were able to resolve the issue for the next season.

“They were very receptive,” Wallace-Jordan said. “I feel like we have more performance time and more support from the athletics department now. We definitely started to feel a difference after that meeting.”

The MataDolls have also created a close bond with each other, planning trips and recently going to Six Flags together.

“We’re almost like a familyhood,” Wallace-Jordan said. “I don’t like to call it a sisterhood because although we don’t have any guys on the team yet, boys are definitely welcome.”

The MataDolls hit their fiery moves with a clear message for the CSUN campus.

Catch the MataDolls’ Live Show for free at 6 p.m. on April 21 at the University Student Union Grand Salon. They will also have a raffle for gift cards.

Tryouts for the MataDolls are on May 2, 3 and 4. Location is private and will be given at the Live Show.