The results of the Mueller investigation 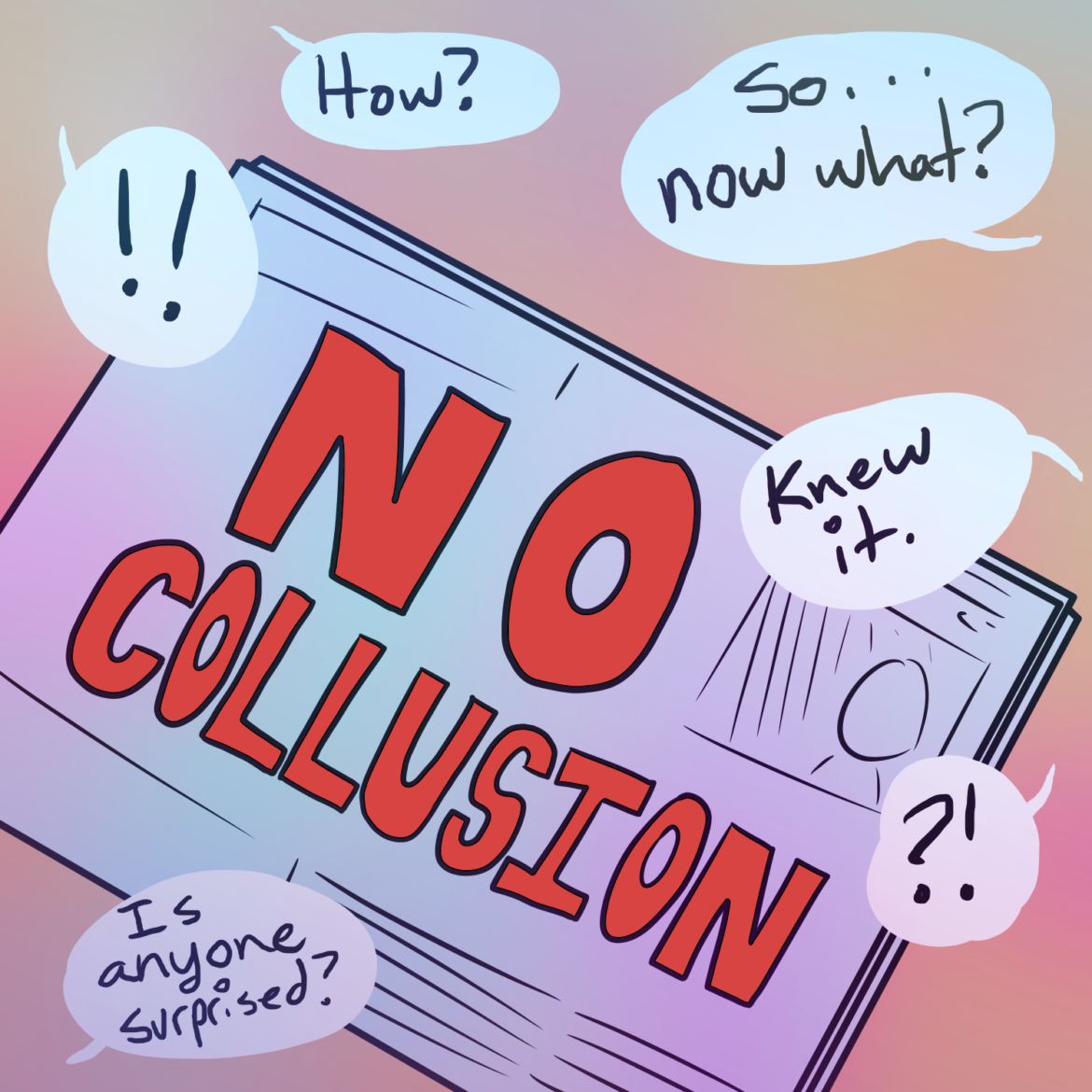 Robert Mueller’s 22-month investigation into President Donald Trump allegedly colluding with the Russian government in the 2016 presidential election has finally come to a close.

Mueller’s investigation “did not find that the Trump campaign, or anyone associated with it, conspired or coordinated,” according to Attorney General William Barr in his four-page summary letter. Barr said that the special counsel conducted a “thorough factual investigation” into whether Trump possibly obstructed justice.

However, it must be clearly stated that the four-page summary of the 200-page original document did not completely exonerate Trump, but rather it only proved that there was no collusion with Russia.

This investigation — as Trump calls it, “a witch hunt” — cost taxpayers over $25 million in the last two years. Nearly every news organization and left-wing political organization has been speculating and fantasizing over the dirt Mueller could dig up on Trump and his associates. They have used the investigation to rally the “resistance” and attack a president that they do not like.

“This person does not seem capable of telling the truth,” Don Lemon said on CNN back in February.

“You have a president who, in my opinion, beyond a shadow of a doubt, sought to, however ham-handedly, collude with the Russian government,” said 2020 presidential candidate Beto O’Rourke.

“There is plenty of evidence of collusion and corrupt co-mingling of work between the Trump campaign and the Russians,” said Dem. Adam Schiff.

What is truly disappointing is not just that the media perpetuated this falsehood for the last two years, but that they hoped for it. What this really was was an abuse of power from politicians and media that have never wanted to give the president a chance. There is going to be no apology to Trump or taxpayers for the last two years of an empty investigation.

“No, I don’t think they need to apologize. We’ve seen over and over again in the public eye exactly how questionable Trump’s actions have been,” said Dem. Katie Hill. The reason they do not want to apologize is that if they do, then they admit they were wrong and what this really is is a victory for the Trump administration.

The president can take a victory lap on this ridiculous investigation from day one. This eases the mind of those who were on the fence about Trump in waiting to see if he was the “criminal” the media made him out to be. With the summary of the investigation out now, Democrats are pushing forward to see the entire report.

I agree that the full Mueller report and supporting documents should be made public. Every American deserves to see what the Mueller team has been doing for the last two years.

“Let it come out. Let people see it,” Trump said.

American people should see the lengths to which Mueller’s team went to to get what they wanted. American people have the right to see the whole report and decide if it is a legitimate investigation or an inquisition carried about by politicians who didn’t like who the American people elected in 2016.

The collusion story will bring lasting damage to the credibility of the American media who have failed their due diligence in seeking to influence, rather than inform, the American people. The elite politicians and media have some explaining to do.

The results of the Mueller investigation make it clear that the world in Washington is about to change dramatically. Trump can now combat real efforts by the Russians to influence our elections, find better ways to compete with China and denuclearize North Korea. I suggest turning the tables and investigating the Democrats and the media that have been echoing these lies to the American people for the last two years.