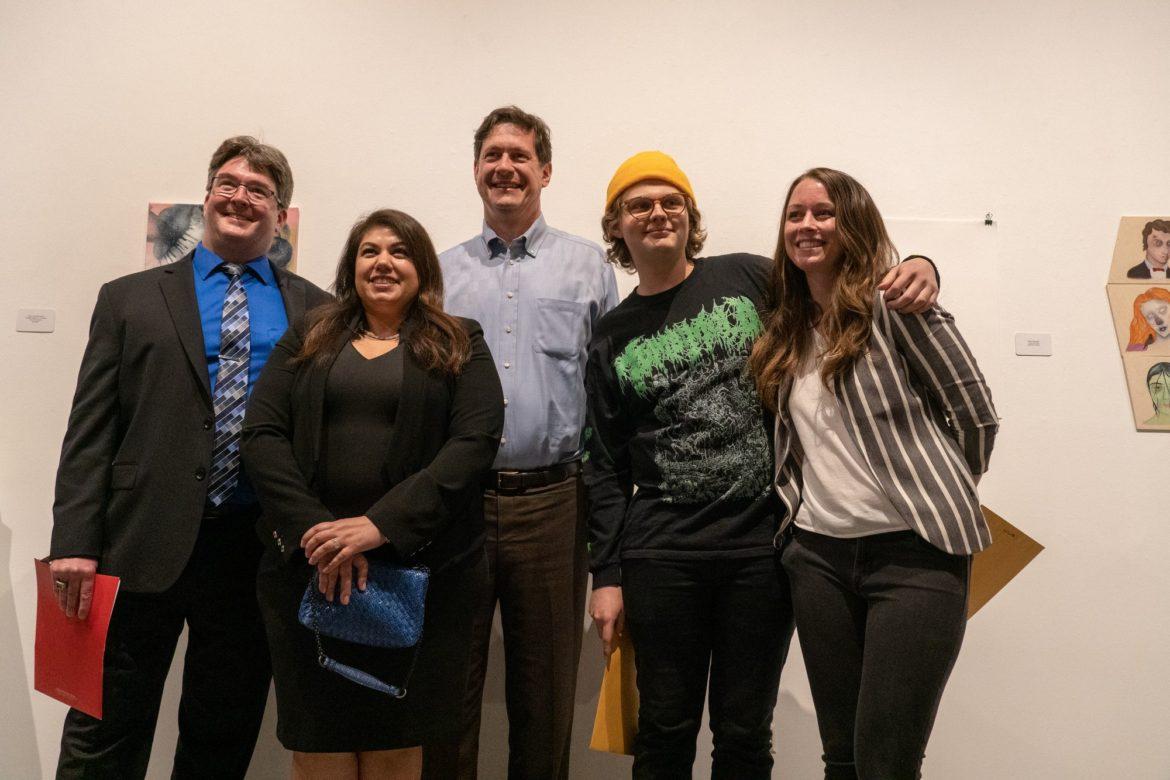 Virginia A. Orndorff and her husband Christopher, accompanied by Dan Hosken and the scholarship winners. Photo credit: Victor Rojas

The CSUN art department held its annual Juried Student Exhibition on April 5. The event allows CSUN students of any academic year or major to enter three of their art pieces to win several awards.

“We had about 325 entries, they bring all the work here to fill up this gallery,” said Sweeters. He also described who the jurors were. The art department asked art professionals like Aandrea Stang, who is the gallery director at CSU Dominguez Hills, Tom Jimmerson, who owns the gallery “As-Is.La” in Downtown LA, and CSUN alumni artist Jeffrey Vallance to be the jurors for the student exhibit.

Mayhall was awarded first place in Best of Show for his piece, “Doorstops.” His piece was made up of door stops he collected. The Northridge native was influenced early on by his mother, who was also an artist.

“My mom always put me in art classes in school,” said Mayhall. “I grew a knack for it.”

He recalled the moment he realized he could make something of his passion when he was given a book about Picasso.

“I was really young and seeing Picasso at like 6 years old, I think I can do something significant,” said Mayhall.

He decided to enter his sculpture piece for the student exhibit, knowing it was a risk but also wanting to share what he described as “a different dialogue than with painting or photography.”

He explained that when it comes to his art, he wanted to give up that control over it and in a way, also himself.

“It’s always completely rewarding when people are able to look at it and respond to it positively,” said Castaneda, who created this piece as a reference to cruising grounds and beat culture. “An object you might find there which is a glory hole but also referencing the self and abuse that I’ve subject myself to both internally and externally. Usually, I like the power dichotomy I have over my paintings and sculptures but again I wanted to give that up in this piece and fully let people take advantage of me.”

Making art is a way of healing for him. With his scholarship, Castaneda plans to continue working on his art and apply for an MFA art program.

Alexander won third place for Best of Show for her piece, titled “Lower East Side.” Her passion for art developed because of her art teachers at the time.

“They helped us develop our practice and taught us about making a career out of art,” she said. Alexander described her inspiration for her art piece as her “relationship to the internet, as like an alternate and parallel reality.”

Her art piece was of lines made up of data from her runs that were mapped from the “Map My Run” app. She extracted the data and layered each one on top of each other to create an abstract drawing. Alexander plans on using her scholarship to pay for supplies and help her with living costs. After graduate school, she hopes to find a studio in LA and find adjunct teaching positions in drawing.

The Dean’s Purchase Award was won by Kaniel, who is also the vice president of the Illustration Society, a CSUN student club. The award means the dean of Mike Curb College of Arts, Media, and Communication, Dan Hosken, bought the student’s art which will be displayed in the dean’s office for a period of time.

Kaniel believes that when it comes to art, you don’t have to be literal. When it came to her current piece, “A Barking Dog Seldom Bites,” she did not want to directly illustrate a barking dog but find something that is also what she considered equally angry and pointless like barking.

“I thought about road rage,” Kaniel said. “I felt that road rage is something that the average LA person experiences.” She illustrated a dog in business clothes to represent him as a regular person.

“There is something inside of him, he has anger issues and he has stress,” she explained. “And that stress, he doesn’t handle well and it turns him into literally an animal.” With her award, Kaniel plans on buying more art supplies to continue her work as an illustrator.

Moradi was awarded one of the Juror’s Choice awards by artist Jeffrey Vallance. Originally from Orlando, Florida, she studied for her undergrad at the University of South Florida before transferring to CSUN last year. She plans on using her award money to buy more supplies for practice.

When it comes to art, her passion is drawing then combined drawing elements with sculpture to create her current work, titled “as painful for me as it is for you.” She also combined sewing to create her work which is a bag that was created with ink, thread and rice paper.

“The sewing on them is considered drawing all in the same, it’s a different way of drawing for me,” Moradi said. When it came to her artwork she wanted to create a sculpture of objects that are used on a daily basis and present them as art because of the way it is made.

“Objects that you would encounter in your daily life but thinking them outside of their normal function,” said Moradi. “It’s a plastic bag but once you make it out of another material, once it’s a more precious material like paper. Works on paper, it’s still a work on paper.”