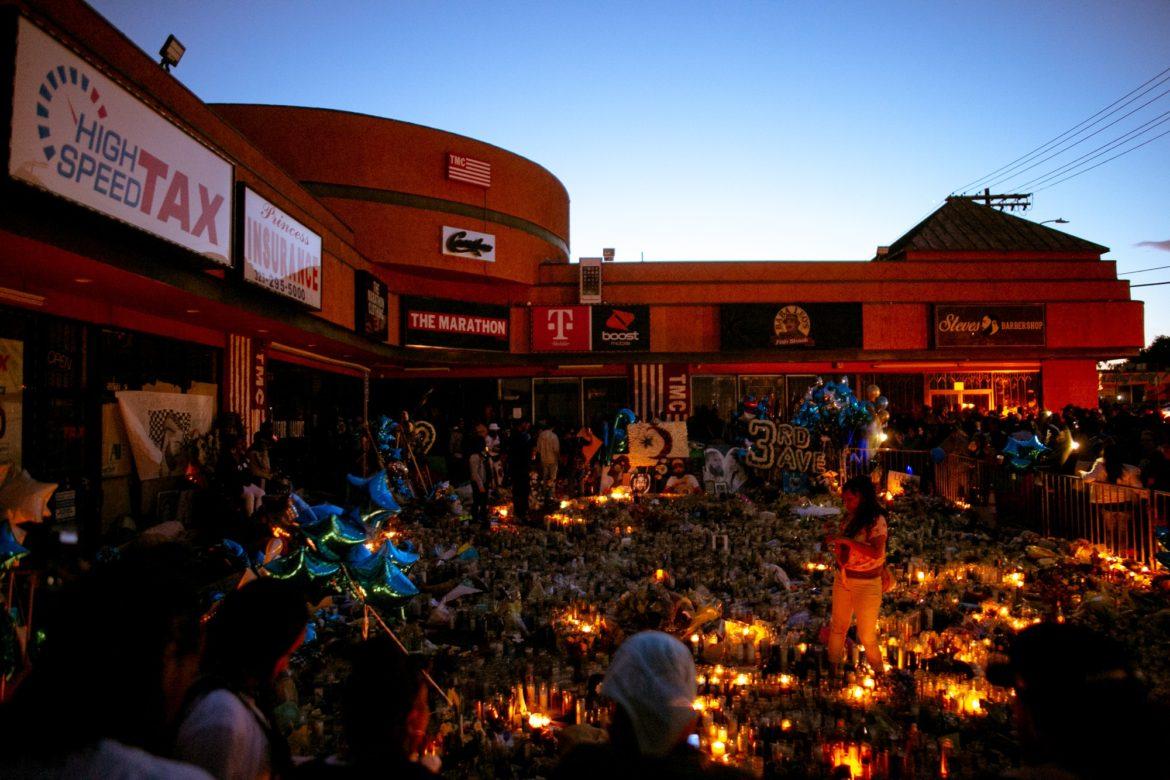 Many people lit candles and left notes outside of Nipsey Hussle's clothing store, The Marathon, after memorial services for the murdered rapper on April 11. Photo credit: Edson Santos

Ermias Joseph Asghedom — the rapper known as Nipsey Hussle — took his final lap around the city of Los Angeles on Thursday.

The rapper’s memorial service was held at Staples Center. Many fans found the venue fitting, knowing Hussle was a Lakers fan and would attend games regularly.

Fans were lined up for hours before the doors opened and it was an atmosphere of love and celebration for the man who did so much for his South Los Angeles community. The stage was full of white, purple and blue flowers with Hussle’s signature “All Money In” logo flower design above his gray casket, along with the Eritrea flag hanging on the side of the casket.

The service included scriptures and prayers, and performances by some of Hussle’s favorite artists, including Jhené Aiko and Stevie Wonder.

Hussle’s brother, Samiel “Blacc Sam” Asghedom, held back tears recalling how protective Hussle was of him, and how from a young age he was a hustler and an innovator. Asghedom said he remembers his brother building a computer from scratch, and later recording music on that same computer. He said Hussle made the world proud.

Fans were patiently waiting for Hussle’s longtime girlfriend Lauren London to take the stage. She broke her social media silence days before the memorial by sharing pictures on Instagram. London shared a private text message she sent to Hussle earlier this year — in which she professed her love for him while he was asleep one morning.

She ended her speech with loving words for Hussle, saying, “I love you beyond this earth and until we meet again, the marathon continues.”

A 25.5-mile-long procession followed the funeral. It passed by parts of South Los Angeles, Inglewood and The Marathon Clothing store where Hussle was shot to death on March 31.

Fans called the procession Hussle’s “Victory Lap” after the album he released in early 2018. People packed sidewalks and streets waiting for the hearse to pass. Many had a chance to talk to Hussle’s mother as the procession was stuck in a sea of people flooding the street. She urged people to end violence and find peace.