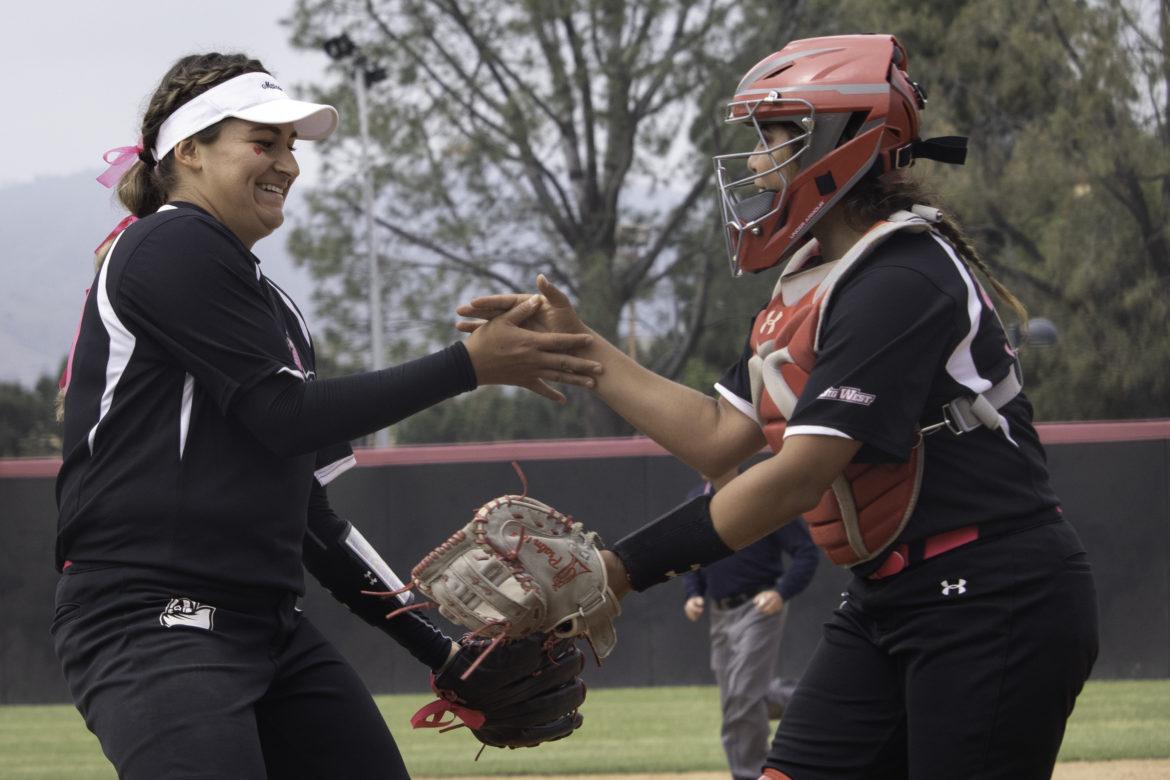 Sophomore Jillian James celebrates with junior Gator Rascon after recording the final out in the win over Cal Poly on Saturday. James pitched 18 total innings in the series, recording complete games in both of the Matadors' wins to earn CSUN's first conference series victory of the season. Photo credit: Tyler Wainfeld

The softball team earned their first conference series victory of the season by winning two of three over Cal Poly at home this past weekend at Matador Diamond.

Friday saw the two teams square off in a doubleheader, with the first game going into extra innings with the score tied at three.

The score would remain deadlocked heading into the bottom of the 11th with freshman Kiarra Crockett-Pope set to lead off. The first baseman saw the pitch she needed and hit a walk-off home run to give the Matadors the 4-3 win.

“That’s huge for a freshman to come up and not let the game get away from her or too big,” head coach Tairia Flowers said. “She came out and swung hard, I think that’s good and that’ll just help her boost her confidence through her career.”

Sophomore Jillian James started the first game on Friday and saw it through until the end, pitching her 13th complete game this season. However, this one was different than the rest as she tied her career high with 11 innings pitched (set last season against the University of Oklahoma) to come away with the win.

James gave up four hits, three runs, all unearned, one walk and recorded five strikeouts to bring her record to 14-10 with a 2.12 ERA.

“It’s frustrating but also humbling to me because it’s just a sign of respect and when I get my opportunity … I’m just going to take advantage of it,” said Stevens.

Though the home run was obviously a great result, it did mean that Stevens would have to wait even longer to try to get another double, one that would give her 18 on the season, the most ever in a season in school history.

“Honestly, I’m not even thinking about that (in that moment),” Stevens said. “I’ve just been waiting for my opportunity to hit and then I got it and I was super excited.”

After Cal Poly won the second half of the doubleheader on Friday to even the series up, the third and final game of the series on Saturday wound up being a back-and-forth affair as the Matadors struck first in the bottom of the second before the Mustangs scored two the very next inning to take a 2-1 lead.

“Today was a battle,” said Flowers. “Both teams came out knowing it was anybody’s game. Both sides made some good defensive plays and made some good pitches and got on the board. I was proud of how well our team competed and showed some heart today.”

In the bottom of the fourth, junior Jessica Alexander hit a two-run home run with two outs to put the Matadors back up top 3-2. Alexander went 3 for 3 with four RBIs and one run, falling a triple short of what would have been just the second cycle in the school’s Division I history.

“Alexander has a lot of potential,” said Flowers. “She has power and speed and is super athletic. I thought she got out of her own way today and made things happen.”

The Matadors would get a couple of insurance runs in the sixth before finding themselves in a jam in the top of the seventh trying to close out the game and the series. James allowed a single and hit a batter to make it first and second with nobody out. The Mustangs then attempted a sacrifice bunt, but junior third baseman Alyssa Vasquez was quick to react and threw to a covering Alexander to get the out at third and shift the momentum back towards the Matadors.

“It’s something that we’ve been working on and it kind of deflates their balloons or their momentum a little bit,” Flowers said about that play. “Huge play, I know it was just one out and nobody scored or anything like that but it definitely shifted the mindset going into the rest of the inning.”

Despite that play, James worked her way into more trouble, giving up a run to make it 5-3 on two singles, loading up the bases with just one out. She was able to get out of it though, inducing a strikeout and a lineout to end the game. She would finish the game having given up eight hits, three runs, one walk and struck out four.

“I got myself into that mess so I knew I needed to be the one to work it out,” James said. “I needed to step up and do it for my team. We needed to have our first (series) win, we needed to get that confidence from our team and I knew I really needed to do it for them … So I finally buckled down, settled down and I got my job done.”

With the 5-3 win, the Matadors were able to win their first conference series and bring their record to 21-24 and 5-7 in conference play. It was an important time to get that first series victory as well as the end of the season draws near.

“You’ve got to figure it out, you’ve got to get that first one at some point and I think that just hopefully it’s a testament that we’re getting better and we’ll continue to get better,” said Flowers.