Women in office: AS presidents look to the future 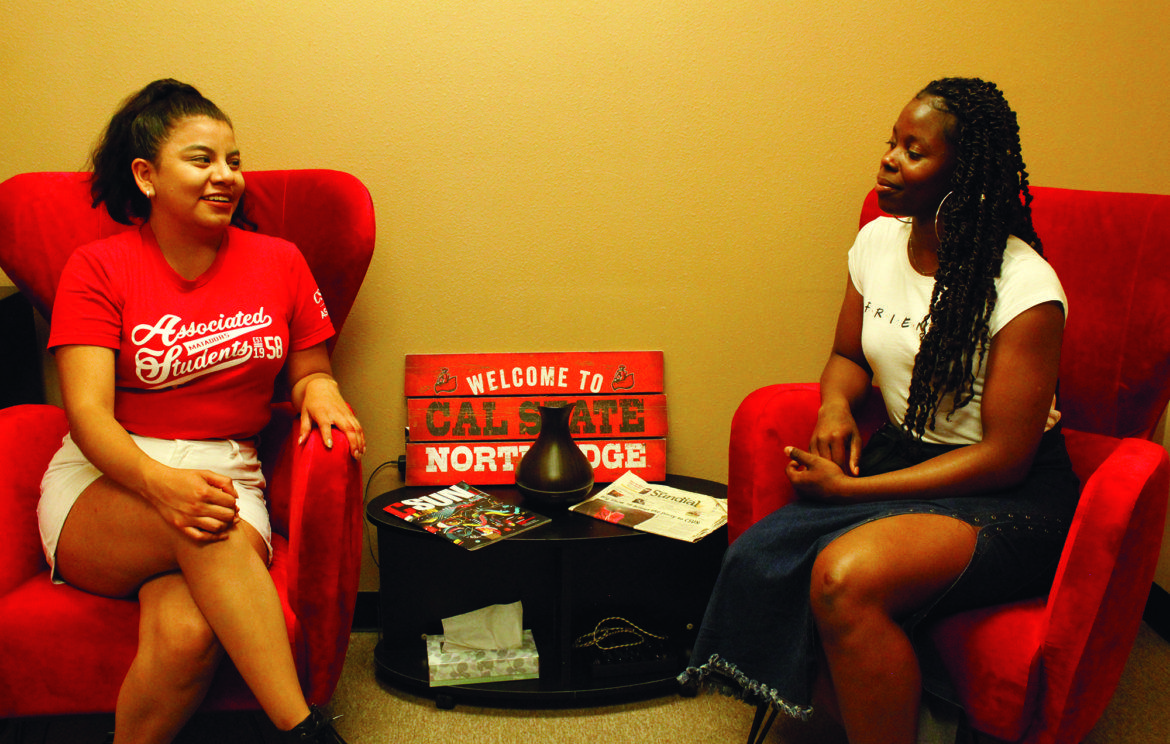 Current AS President Beverly Ntagu (right) gives advice to newly-elected AS President Diana Vicente (left) in the AS offices. Ntagu will graduate in May and Vicente will be sworn into office on June 3. Photo credit: Elijah Carr

Beverly Ntagu and Diana Vicente are more similar than they thought. They are both outgoing, daughters of immigrants and women of color. The only difference: Ntagu is about to finish her term as president of Associated Students and Vicente is about to start hers.

Despite not being familiar with each other, they knew of the other through their involvement with AS and their overlapping circle of friends.

“We knew each other but we didn’t ‘know, know’ so now we’re working on getting to know each other on a more personal level and getting past the professionalism to simply sit down and talk,” said Vicente.

Ntagu, who was elected for the 2018-19 academic year, remembers the challenge of coming into the new role because it came unexpectedly, adapting to the position with help from her team, family and friends.

“I didn’t get a transition into the position and I want to make sure Diana and her team do, because you can’t coach somebody to be AS president … you can tell them who they need to meet and what to expect but during your term, you don’t know what’s going to happen,” explained Ntagu.

For Vicente, what impressed her of Ntagu was the manner in which she handled everything that came her way this academic year. Vicente recalled one day that she ran into Ntagu after executive meetings were happening and told Ntagu she was paying attention to everything she was doing.

“The way everything was handled, the way she communicated herself with faculty and students was impressive,” said Vicente.

Both Ntagu and Vicente agree that being outgoing has helped students approach them with their concerns. When students see them in class or at clubs they know they are seeing two honest people they can trust.

“It goes back to the fact that we’re students too. That relationship that we build in our classrooms and clubs and walking around on campus saying hi to students, that’s what it’s all about,” said Vicente.

Both women feel that being daughters of immigrants has inspired them to work hard and have zero excuses not to try their best and achieve what they want. They see their parents who, for both families, arrived in the U.S. with nothing and were able to make a life for themselves. If that’s the case, then so can they.

“Both of us come from a place of not having privilege so everything is a privilege to us,” said Ntagu.

Before Ntagu passes off the baton, she offered her advice from her experiences as AS president to Vicente as she prepares to assume the new role.

“Don’t give up and keep going, when you get it as I pass it over to you take that and make it better … take care of yourself, mind, body and spirit,” said Ntagu. “Students voted for you for a reason and you’re here for a reason.”

Ntagu is proud of her accomplishments advocating for students throughout the executive orders and the campus threats, her trip to Sacramento standing out among those achievements.

“I’ve never lobbied and chanted in front of many and I think being in this position allowed me to do that,” said Ntagu. “It strengthened me as a person and I felt my community and friends strengthened as well.”

Ntagu will be graduating in May and is hoping to get accepted into an establishment that will propel her to the medical field.

“I’m so honored and privileged to be in this position,” said Vicente. “It’s not just about focusing on my community but all the different ones and see how I can represent them and give them a voice. That’s why meeting with Beverly will be helpful because it will allow me to continue her efforts.”