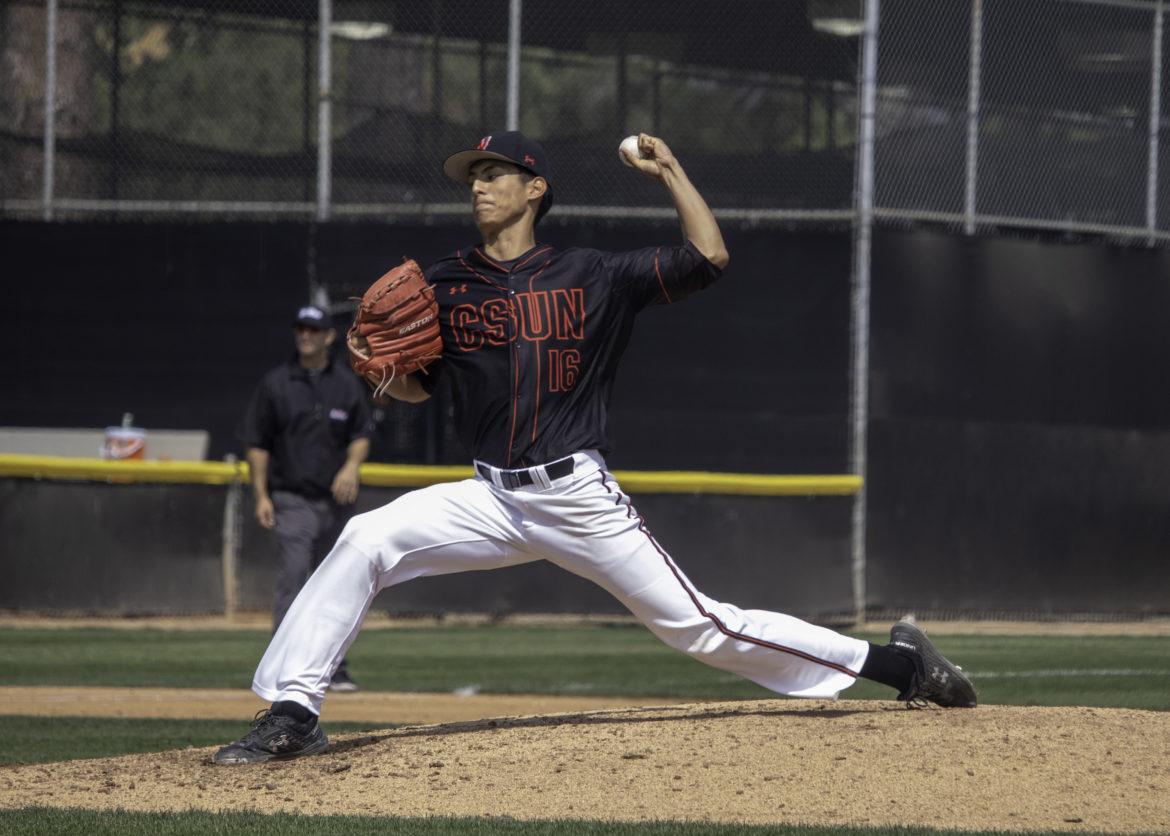 Senior Isaiah Nunez in the 10-2 victory over Hawaii on Saturday. The left-hander tossed 7 1/3 innings, scattering nine hits and giving up just one unearned run to earn his seventh victory of the season. Photo credit: Tyler Wainfeld

After losing a tight contest on Friday, the offense broke out in a big way on Saturday, backing up senior Isaiah Nunez’s 7 1/3 innings of dominance on the mound in the baseball team’s 10-2 victory over the University of Hawaii at Matador Field.

The game started off on a similar note to Friday’s gmars as the Matadors were shut down in the first two innings. That, however, would be the end of the offensive struggles as they exploded with three runs in both the third and fourth innings to take a 6-0 lead.

Junior Sean Skelly was the catalyst in the third inning, starting off with a double before moving over to third on freshman Austin Elder’s infield single. Skelly was then brought home on a sacrifice bunt by freshman Josh Cerpa to open the scoring. Junior Robert Bullard followed that up with a walk to bring up junior Jose Ruiz Jr., who doubled to score Elder and Bullard.

The fourth inning saw the Matadors do more of the same, with junior Angelo Bortolin getting it started with a leadoff walk before sophomore Brandon Bohning moved him over to second on a sacrifice bunt. Skelly then singled to move Bortolin to second and both runners moved up a base on a wild pitch, allowing Cerpa to bring both of them home on a single. Bullard then finished the barrage with a single, scoring Cerpa to make it 6-0 after four innings.

The Matadors would add two more in both the sixth and seventh innings to give them 10 runs.

“I think you saw a lot of guys just do the simple thing and take simple swings in (clutch) situations,” assistant coach Riley Goulding said. “Cerpa is one of them with the groundball up through the middle. Austin Elder hit a ball hard up the middle … Skelly had a good swing through the middle of the field. I think they were doing a lot of that stuff, not trying to get too big.”

It was also a somewhat historic day for the team according to graduate manager Tei Vanderford, who noted that it was the first time this season that CSUN had scored 10 or more runs without a home run.

“I think that’s just a note on what kind of swings the guys were taking today,” Goulding said. “They weren’t trying to lift and leave the yard. They were just taking what they were given.”

While explosive offense is always a welcome sign, it wasn’t exactly necessary as Nunez scattered nine hits and gave up just one unearned run across 7 1/3 innings before giving it over to the bullpen for the final five outs. Despite only getting three strikeouts, he was effective nonetheless, keeping hitters off balance throughout the game with a mix of fastballs, cutters and curveballs to induce weak contact and let his defense finish the job for him. He was also extremely accurate, throwing 80 of his 108 pitches for strikes while walking none to earn his seventh win and lower his ERA on the season to 2.82.

“He does a great job all the time,” said Skelly, who served as Nunez’s catcher. “He gets ahead, it’s always like he’s pitching 1-2 to guys and then he’ll give up a single here or there but it’s not a big deal … He does a really good job of staying pretty calm and collected and throwing a lot of strikes and mixing it up. He does a really good job. It’s fun to catch.”

Skelly himself was an energizer at the plate, going a perfect 3 for 3 with a double, a walk and three runs scored, making everyone forget about the 0-for-5 day that he had on Friday’s loss.

“I think he’s a great example of (staying simple),” said Goulding. “He’ll hit his home runs, he’s got five or six of them on the year, but if he gets in to that a little too much and he tries to do that, that’s when he gets into a little bit of trouble. But today, he did a great job … When he’s hitting the ball hard to (right field), you know he’s seeing it well and he’s got a good swing going.”

With a win in game two of the three-game series against the Rainbow Warriors, the Matadors now have a record of 18-23 (5-7 Big West).

The rubber match will be played on Sunday at 1 p.m., with freshman Blake Sodersten (1-2, 4.28 ERA) getting the start on the mound for the Matadors. Hawaii has yet to name a starter for the series finale.