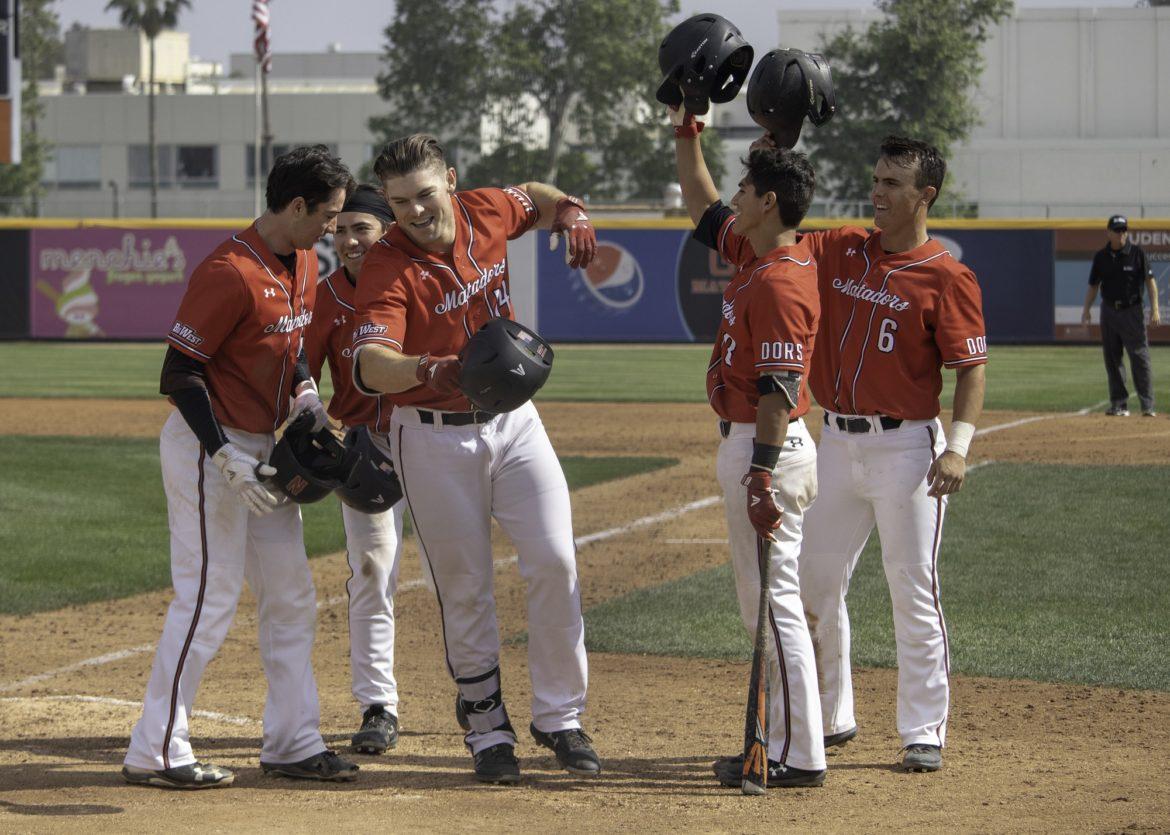 Junior Blake Doremus (center) is congratulated by his teammates after hitting a grand slam to give his team the lead in the seventh inning of CSUN's 6-3 victory over Hawaii on Sunday. Doremus pinch hit for sophomore Victor Cerny and deposited a 1-1 pitch over the left field wall, winning the game and the series for the Matadors. Photo credit: Tyler Wainfeld

The baseball team beat the University of Hawaii 6-3 on the back of junior Blake Doremus’ go-ahead, pinch-hit grand slam in the seventh inning to secure the series victory on Sunday at Matador Field.

CSUN started the game with two errors, first by freshman Denzel Clarke in center field followed by sophomore Brandon Bohning at shortsop, gifting the Rainbow Warriors two runs to give them an early lead in the first inning.

Those wouldn’t be the only mistakes that the Matadors would make as they seemingly tried to give the game to Hawaii. In the third inning with runners on first and second and nobody out, freshman Andrew Lucas popped up a sacrifice bunt attempt and was unable to move the runners up 90 feet. Then, in the next at-bat, freshman Josh Cerpa attempted to steal third base on the first pitch to senior Kyle Barret but was thrown out easily.

“I think what you see sometimes with our young team is you see some freshman and even sophomore mistakes,” head coach Greg Moore said. “We’re just young at times and I think eight freshmen hit the field today at some point, maybe seven, and then two sophomores along with them. When over half of your players on the field are younger guys, you’re going to get some of those mistakes. I like it because we’re getting them in right now and it’s a good sign for us.”

Cerpa’s aggressiveness would come back to bite the Matadors as Barret wound up doubling in his at-bat, scoring Bohning to put the Matadors on the board, though it could have been tied had Cerpa not been thrown out.

CSUN would go on to tie the game at two apiece in the fifth inning when Jose Ruiz hit an RBI double to left field, though the Rainbow Warriors would come back to take the lead at 3-2 in the sixth with an RBI single.

With the team down by one going into the bottom of the seventh, Barret led off with an infield single before Ruiz and junior Sean Skelly worked back-to-back walks to load the bases with nobody out. Doremus was then called upon to pinch hit in a bid to change the tide of the game and he did exactly that, blasting a grand slam over the left field wall to put his team up 6-3.

“Coach (Moore) told me an inning earlier to get ready to hit,” said Doremus. “I knew what I needed to do. I went into the at-bat mainly trying to get on top of the ball, not trying to do too much, hit the ball in the gap and just move some guys over. Do the simple job, not the big job.”

“It’s really hard to describe, you know,” Doremus continued about what it felt like watching the ball go over the fence. “It’s an unbelievable feeling. And I’m just happy I was able to come off the bench and do what my team needed me to do.”

Sophomore Blake Schriever came in to pitch the eighth and ninth innings, retiring all six batters he faced to earn his eighth save of the season, while junior Cruz Daddario got the win, his first as a Matador, after pitching 1 1/3 scoreless innings out of the bullpen.

The Matadors will stay put as they host UC Santa Barbara on Friday in the first of a three-game series at Matador Field.