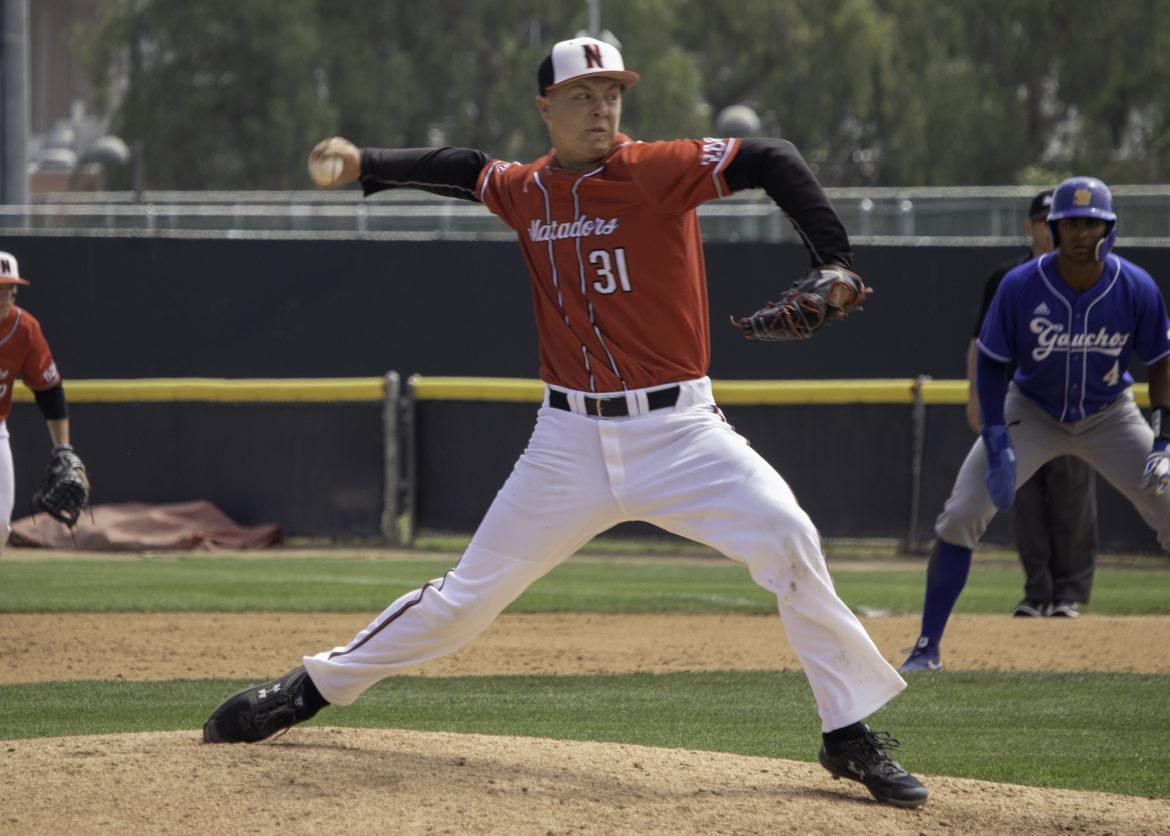 The baseball team fell short of a ninth-inning comeback bid against UC Santa Barbara, who beat the Matadors 5-3 on Sunday at Matador Field to secure the series sweep.

The Gauchos took the lead in the top of the ninth after two singles and an intentional walk to start the inning preceded a 2-RBI single to put them up by two. Sophomore Blake Schriever was then able to buckle down and get out of the inning without giving up any more runs to give his team a chance to stage a comeback.

In the bottom of the inning, juniors Blake Doremus and Angelo Bortolin were quickly set down as the Matadors were down to their last out. However, freshmen Denzel Clarke and Andrew Lucas hit back-to-back singles before sophomore Brandon Bohning drew a walk to keep the inning alive and bring up junior Jose Ruiz Jr. to the plate. On a 1-1 count, Ruiz hit a hard line drive to right field but easily playable for the right fielder, who made the final out to finish off the game.

“We didn’t get the swing that we wanted but we had some opportunities because the at-bats were good,” head coach Greg Moore said. “The bottom of our lineup was impressive in the way they took pitches, they worked their way on. Bohning’s at-bat late was a good one. But we just didn’t get the big swing when we needed it.”

The Gauchos took the first lead of the game in the second inning on a 2-out single up the middle off of Matador starting pitcher freshman Blake Sodersten to put them out in front 1-0.

CSUN would come right back in the bottom of the inning, though, with senior Kyle Barret driving in junior Sean Skelly with a double to tie the game up at one apiece. Barret would later score on a sacrifice fly by freshman Josh Cerpa to give the Matadors a 2-1 lead.

Sodersten would go on to pitch 4 1/3 innings, giving up a home run in the fourth that tied the game at two before being replaced by Schriever. Sodersten gave up just the two runs on six hits while striking out five, with the freshman putting in one of his better performances of the season.

“I think (Sodersten) took the ball and said ‘I’m going to go do what I do,’” Moore said. “He was very aggressive to throw his fastball to both sides of the plate. I thought his cutter was as good as it has been all year, probably firmer than it’s been all year. I was impressed with what Blake did. He threw up in the zone. He had three or four things working that made him tough to hit.”

Schriever came in with just one out in the fifth and runners on first and second and was tasked by Moore with keeping the score tied, which he did by inducing a strikeout and a popup to get his team out of the inning. From there, he was dominant, with the only blemish (besides giving up the winning runs in the ninth) being a go-ahead solo home run surrendered in the seventh inning, which would end up being canceled out in the bottom half of the frame on a solo home run courtesy of Bohning, his seventh of the year, to set up the pivotal ninth inning.

“I’d faced (Gaucho pitcher Shea Barry) before and I knew his arm slot, I knew what he had,” said Bohning. “Coming into that at-bat (in the seventh inning), I kind of had a chip on my shoulder knowing that I was probably going to get a fastball to start and I just didn’t miss it. It felt pretty good off the bat.”

Though Schriever was unable to hold off Santa Barbara at the end of the game, Bohning was impressed by Schriever, who would typically pitch just one or two innings at a time, and his ability to keep the Matadors in the game despite having to go 4 2/3 innings out of the bullpen. He would give up five hits over that stretch and strike out seven batters while walking just one (not including the intentional walk in the ninth).

“(Schriever) did excellent on the mound today,” Bohning said. “He made every one of his pitches. He was making them look silly for the majority of the game … That’s what Blake does. He just goes in there, he doesn’t care where guys are (in the batting order). He just pounds the zone and he did exactly what we wanted to do there. Things didn’t go his way today but he did an excellent job.”

With the loss, the Matadors now have an overall record of 19-26 and 6-12 in Big West play, meaning they will stay in eighth place in the conference standings, two games ahead of Long Beach State in last place.

The Matadors stay home for their next game, welcoming California Baptist University to Matador Field on Tuesday, May 7 for a 3 p.m. non-conference game. The Matadors won their last meeting against the Lancers, beating them 7-4 on April 23 when the two schools met in Riverside for a neutral-site game.

After that, they will travel to UC Davis for a three-game conference series against the Aggies starting on Friday, May 10.