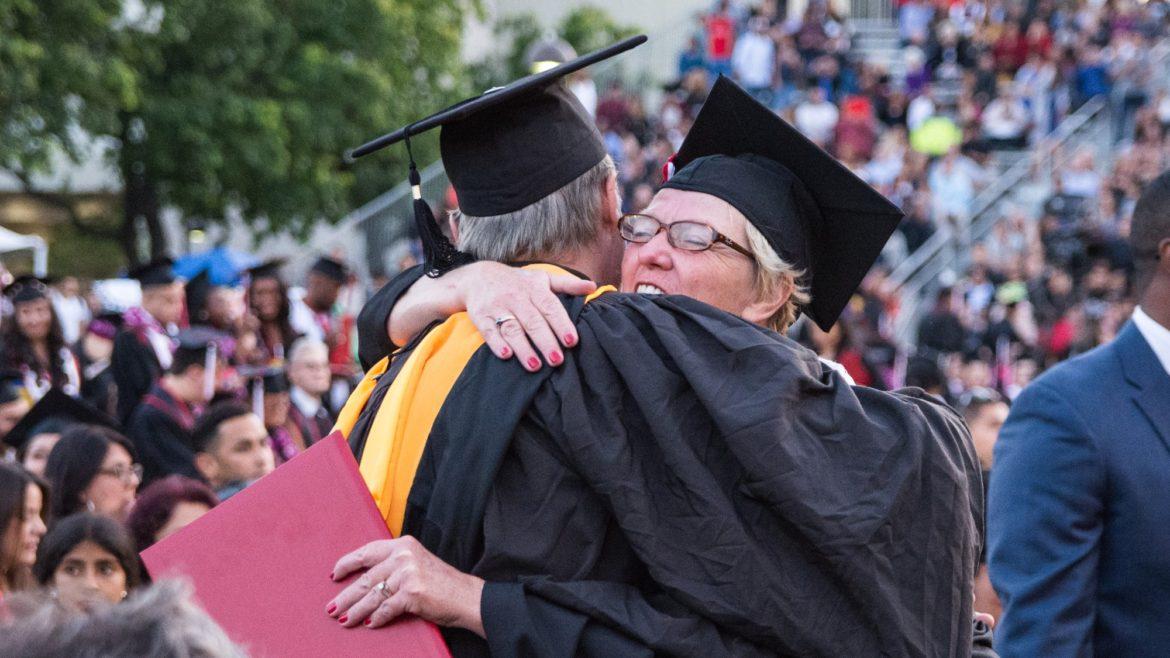 When students like Andranik Zarikyan first step on campus at CSUN, they come with ambitions higher than Sierra Tower. However, the success they strive for may not be so easily grasped.

“That does not surprise me,” said Zarikyan after learning of CSUN’s graduation rates. “Some of the requirements are pretty stringent.”

Dr. Michael Kurland, graduation retention specialist for the Mike Curb College of Arts, Media, and Communication offered a few reasons why graduation rates within the first four years are so low: students taking less than 15 units per semester, students changing their majors and some majors having very large requirements.

“I know for music you have to take everything you need to take every semester or else … it’s almost impossible to graduate in four years if you miss anything,” Kurland said.

Students shouldn’t assume they won’t be able to graduate in a timely manner because the number skyrockets to 53.5% when looking at the students who started in fall 2012 and took six years to graduate.

Zarikyan said he would be lucky if he was able to graduate within four years given the requirements of being an applied mathematical sciences major.

Paulette Robbins, a transfer recruitment coordinator, said she sees a maturity difference between freshmen and transfers.

“(First-year students) are ready for college, but the maturity will come,” Robbins said. “It’s going to force you to become committed and independent … and then transfer students are those people that have experienced that.”

The larger reason that number is so low, as explained by the senior director of the Office of Institutional Research Janet Oh, is that all of the freshmen who drop out are counted in the overall percentage. The first year of college clearly is critical in terms of college success.

“When you look at the second year of retention, those who come back for their second year, that’s when we lose the most students,” she said.

In addition, Oh explained that nearly a quarter of students don’t return after the first year of college. Of those who dropped out, a third of them were in good academic standing.

Transfer students, who likely started in community college, boast better success rates with 35.1% of students graduating in their first two years at CSUN, and 75.7% after four after starting in fall 2014 and 2012, respectively.

This isn’t something that is exclusive to CSUN. According to the news website Inside Higher Ed, of the students who transfer to universities, 71% graduated within four years of transferring.

One theory for transfer students having a higher graduation rate than students who arrive here from high school is the time transfer students spend at community colleges helps them know exactly what they want at CSUN, and they will have their minds set on a certain degree, according to Kurland.

“But that’s just one idea that’s thrown around,” Kurland said. “I couldn’t tell you exactly what is causing the large discrepancy.”

“They’re not ready,” said Ramirez. “What’s expected of them (in high school) … it’s just not as intense or as difficult as when you go to university.”

Ramirez said there are many ways in high school to recover if you find yourself falling behind such as going to summer school or simply working something out with your teacher, but that it doesn’t prepare you for the rigorous classes students will face in a university.

Kurland and Ramirez both offered the same piece of advice for first-time freshmen: look for support. Family, faculty and/or other students can be a good sounding board with whom you can discuss your situation.

Oh theorized in a more data-oriented manner. Of the students in California community colleges who say they want to transfer, only a very low percentage of them actually make it to university.

According to the California Community Colleges’ Chancellor’s Office, just 126,066 out of the 2.1 million community college students transferred to a four-year university in the 2017-18 school year.

“You’re getting so few of the students, who actually want to transfer to a four-year actually making it to CSUN or another four-year,” said Oh.

Kurland also said that something that possibly separates students who succeed where others don’t is to have the grit or the resilience to learn from their failures.

“Because, you know, life is all about learning from failure,” said Kurland.