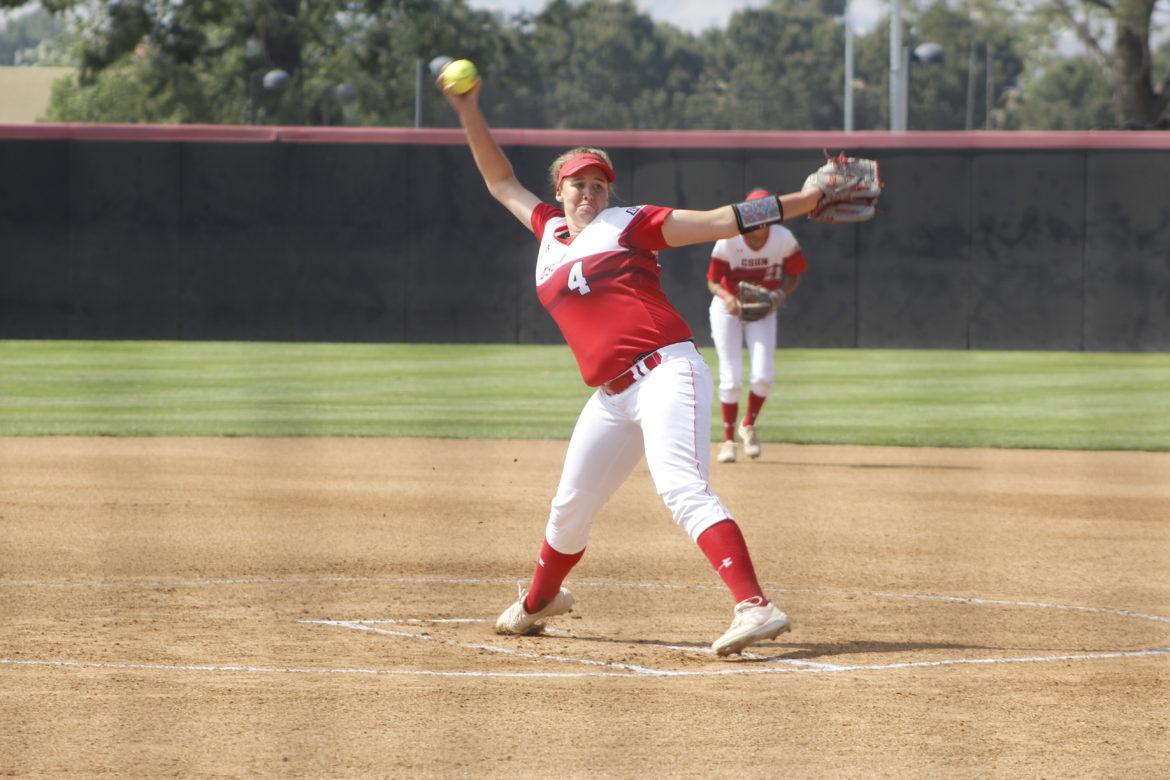 The Matadors dropped their final home series 2-1 against Hawaii, losing 2-1 in game one on Friday, and splitting the Senior Day games with a 3-1 win and 4-3 loss.

Friday’s game went back and forth as both teams were unable to capitalize when there were runners in scoring position. Both teams were evenly matched as the game went scoreless through regulation, forcing extra innings to determine a winner.

“I thought they came out to play,” said junior Megan Stevens. “They knew what they were up against and I felt that we felt the same way, so it was a close game and that’s why it was 0-0 for so long.”

Unfortunately, it wasn’t enough as the Matadors ended up losing 2-1 after eight innings.

“It was a good battle. Both teams did some things well and both of us probably need to shore up some other things,” said head coach Tairia Flowers. “We put ourselves in a position to beat a good team and we just fell a little bit short. Hopefully tomorrow we will come out motivated and excited to play.”

Both teams needed to make adjustments throughout the game if either team was going to pull out the win, including taking advantage of what they were given as neither side could get the clutch hit before the eighth inning.

“I thought that we had a lot of opportunities to be able to score and I thought in the extra inning, we came up with clutch hitting and we had a lot of heart,” said Stevens. “I feel like we could’ve had that earlier in the game, but it’s how it went.”

Sophomore outfielder Kira Cauley was the catalyst for most good things for the Matadors on the offensive end, going 3-for-4 in the leadoff spot and was the only Matador to have more than one hit.

“It’s big. Having your leadoff (hitter) start the game with a hit and making things happen, it gives you momentum, it gives you confidence as you move forward,” said Flowers. “It was nice to see her step forward and make things happen.”

The next day was a brand new battle as they went into the doubleheader already down one game. The Matadors and the Rainbow Wahine split the day, ultimately giving the Rainbow Wahine the series win, two games to one, on Senior Day.

Before the games began, all the seniors were honored. The seven seniors from Hawaii were honored first before the three Matadors were. Seniors Mackenzie Babbitt, Haileigh Gonzalez and Taylor Troost were joined on the field with their families as the rest of the team and coaches presented them with flowers, leis and plaques with a miniature jersey and their numbers. All three of their moms pitched the ceremonial first pitch as their daughters began their final games at Matador Diamond.

“I think they’ve done a good job for us of leading the way and they didn’t try too much today and they stayed within themselves,” said Flowers. “Taylor coming out and setting the tone for us and Mack and Haileigh being stable throughout the season. I thought they did a good job.”

The Matadors won the first game 3-1 courtesy of a three-run shot from Stevens that went over the center field fence in the bottom of the sixth inning. This was her 13th home run of the season and brought her total RBIs to 55 on the season, the third most in CSUN history.

James pitched 6.2 innings in the win, giving up six hits, one run, three walks and recorded eight strikeouts before Jamerson came in to pitch the last out.

In the second game, freshman Kiarra Crockett-Pope hit a home run over the left field fence to start it off for the Matadors in the second inning.

“It’s always nice when you can square something up whether it’s a home run or whatever it is,” said Flowers. “I thought (our hitters) were seeing the ball well and weren’t trying to do much and it fell their way.”

They were leading 3-2 at the end of the sixth inning before Hawaii scored two runs to put themselves in the lead. This was the last lead change as the Matadors were unable to get back in the game and ultimately fell for the second time in the weekend.

“Today was a hard loss, we battled and put ourselves in a position to win the second game, but we just fell short and obviously that’s a great team,” said Flowers. “Both teams played some good softball today.”

During the course of the day, James faced three bases-loaded situations, twice in the first game and once in the latter game.

“I was just thinking, stay calm, focus on my snap and release and just hit my corners,” James said about keeping her composure during those pressure situations. “My defense has my back.”

“Just gotta win and stay aggressive and continue to get better,” said Flowers about the strategy for the rest of the regular season. “For the postseason, it’s where you want it all to come together, so hopefully next weekend we can continue to grow. From then on it’s just to have fun and enjoy the ride.”