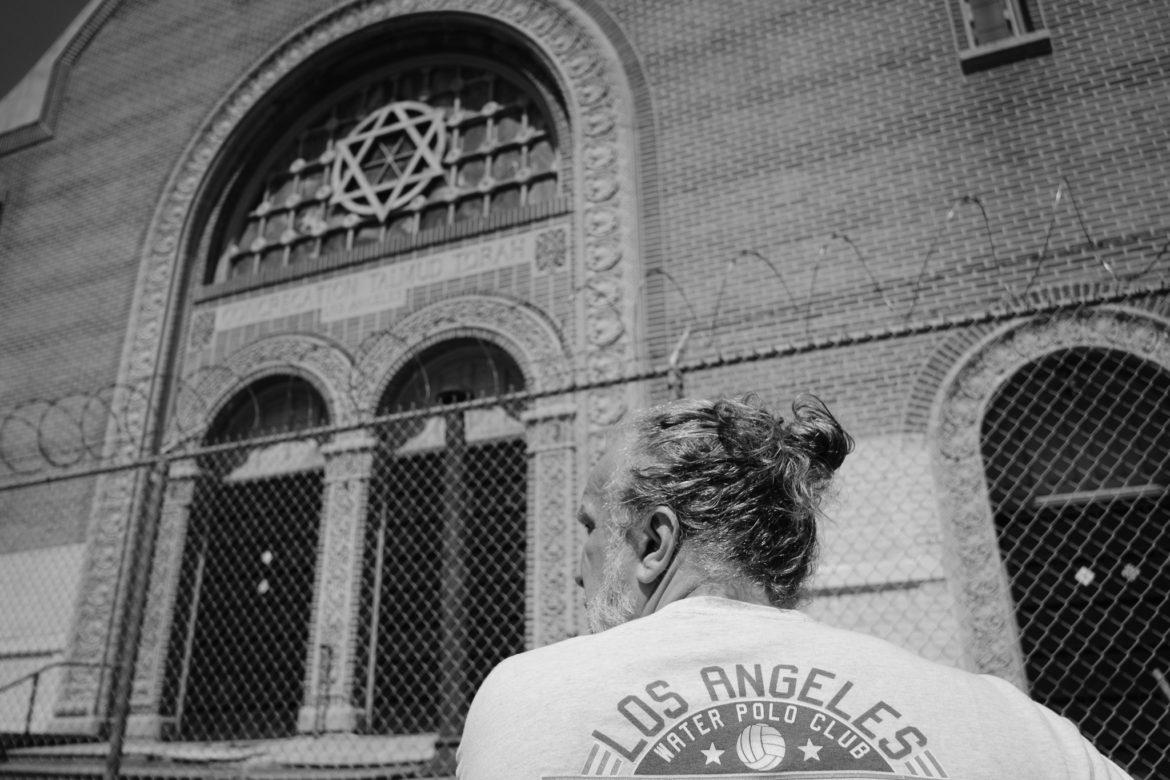 On May 11, Dr. Graves stands in front of an old and now abandoned synagogue. Just one of the many remnants of the huge Jewish community that once lived here. Photo credit: Blake Berry

While exploring landscapes of gentrification, a small group of CSUN students went on a “taco tour” led by CSUN geography Professor Dr. Graves. The group was made up of predominantly geography majors and explored parts of east Los Angeles, a place that has bared witness to waves of immigration, and a variety of ethnic and cultural groups that once claimed this area as home.

On Saturday, May 11, Dr. Graves and students met up at Mariachi Plaza located in the Boyle Heights district of the city, just east of downtown. Here they started their tour on foot and towards the first taqueria of the day, Guisadoras.

As they walked around many of the students were quick to point out areas of the city that looked to be subjected to gentrification.

In an excerpt taken from a textbook by Dr. Graves called “Introduction to Human Geography: A Disciplinary Approach,” “Gentrification is a process that usually begins with people of lower social status gradually improving a neighborhood until people from higher social status consider it a desirable location and begin occupying it.”

In a place that has experienced such a diverse number of ethnic communities settle, live and move away such as the city of east LA, it makes geographers like Dr. Graves feel like a kid in a candy store.

Daniel seen here talking to Dr. Graves at our third and final stop of the tour, El 7 Mares, for some fish tacos. Daniel is a CSUN grad student and heard about Dr. Graves’ tour through an email he was sent. Daniel told me that it’s great that Dr. Graves offers these tours every once in a while for students, explaining that some people have to pay for these types of things and will still never get the same experience as the one Dr. Graves provides.

East Los Angeles has seen Italians, Germans, French, Russians, Armenians and Japanese move in and out of the city over time. Many of these groups were fleeing from turmoil and repression that was present in their homeland. Repression of Jews throughout eastern Europe brought an influx of Jewish immigrants into the city. The Jewish population kept rising through the end of WWII. At the same time, Mexico’s unstable government and economy forced a number of the immigrants to leave their lives behind and come north.

As Dr. Graves led us through a section of the city, he would constantly remind us that many aspects of both Japanese and Jewish communities can still be seen in the landscape today although it is now mostly catered to the Hispanic culture. During our tour we saw a Japanese temple, an abandoned synagogue, as well as fast food restaurants where both pastrami sandwiches and burritos shared a place on the menu.

After a long day of walking, talking and eating, the members of the group that still remained, including Dr. Graves, took the LA Metro train back to north Hollywood Station. There everyone said their goodbyes and thanked Dr. Graves for the experience and good times. This is not the first time Dr. Graves has held a trip like this before.