Meet the new AS president and vice president 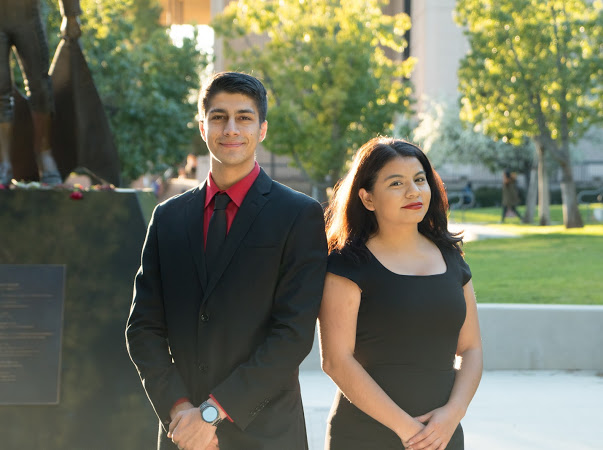 Diana Vicente, a 20-year-old marketing major and management minor who has been involved with AS since her freshman year and previously served as AS chair of elections, will be sworn in as the new president of Associated Students on June 3 with her vice president, Mohammad “Q” Hotaki.

“Right now with the overwhelming amount of work we have I realize there’s a lot of little things that need specific attention, so I want to be able to attend to those things to the best of my ability,” said Vicente. “I also really want to break the barrier between Associated Students and our general student population and let them know what AS is and how we can help them to the best of our ability.”

From a young age, Vicente had an interest in student government. Being part of ASB during her middle and high school years made her realize how exciting organizing events like pep rallies, helping students, being treasurer and the class representative could be.

“There’s always been something in me that’s made me want to help students and when I came to CSUN, I was excited to see how I could get involved,” said Vicente. “I’ve always been very passionate about helping students.”

She discussed their plan to make sure students have access to the latest technology in order to be competitive against other students from big-name universities.

“We have such a diverse and large student population and we have the means and the students to be the best, so we want to give our students access to all the technology they need to gain experience and progress in their professional careers,” said Vicente.

Vicente says being in the position she finds herself in is one that has taken her a lot of balance, dedication and hard work.

“I’m nervous and scared because I want to do a good job but based off of my involvement, everything I’ve worked hard to become and what I’ve done on campus, I feel that I am ready,” said Vicente.

As new vice president, Hotaki knew that running this year compared to a year ago felt different.

“Something that’s different this year from last year is that I knew what to expect, I knew I had to be out there during election days campaigning, talking to students, asking what they wanted to change,” said Hotaki.

For Hotaki, this is the first time that he is involved in student government on such a large scale. Previously, he was treasurer during his middle school years.

“On such a large scale, because we have over 39,000 students at CSUN, yes this is my first time being really involved in student government and representing such a diverse community,” said Hotaki.

The 24-year-old has previously stated that establishing a book voucher program to help alleviate students of financial hardships when purchasing books is one of his main goals as vice president.

“This program aims to help students who can’t afford to pay for books. Most professors still require textbooks either in eBook form or hard copy, and they’re expensive,” said Hotaki. “I’m passionate about this because I couldn’t afford to pay for college or my books and it really affected me, so this ultimately is for the students.”

Hotaki also discussed the pair’s plan on ways of getting students more engaged in school activities and becoming more involved.

Hotaki is a sergeant in the Marine Corps which he has been in for six years, and he also works at a clinic that helps patients with traumatic brain injuries.

“My future goal is to stay in the military and also go to pharmacology school,” said Hotaki. “I want to work in a research lab synthesizing drugs. That’s the reason I chose biochemistry, because that’s the path I want to take.”

As a team, Vicente and Hotaki are prepared to take on their new roles and ready to bring change and help students as much as they can.

“Diana and I want to benefit the students. We’re both graduating in a year so all these programs and services we want to bring are not going to help us,” said Hotaki. “They’re for incoming students and transfers and it’s about how AS can help them.”