President Obama needs to get his priorities straight 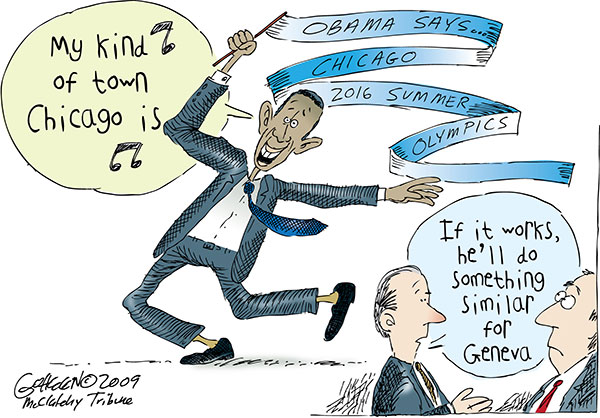 President Obama is a making a mockery of America’s priorities with his visit to Copenhagen, Denmark today. His visit is for one reason and one reason only, to bring the Olympics to Chicago in 2016.

The Olympics are one of the most anticipated and celebrated cultural events in the history of the world. It brings the world together for two weeks to celebrate and support different nations and athletes representing those countries.

I hope that Chicago hosts the XXXI Olympiad in 2016. I would be the first to wear red, white and blue, hoping for an American sweep of the events, but at a time when Obama is facing some of the toughest challenges and divisions this country has ever seen, it’s flat-out ludicrous that he goes to there to cheerlead.

Afghanistan is aching for decisions from our commander in chief. The troops are hoping for more support and quick action so they can handle the enemy and make a successful push. Health care is at a standstill and the recession, well, it’s still a recession. But, hey let’s get rockstar Obama over to Denmark for a day and delay fixing the problems and quagmires this country is currently facing.

Great idea chief. Let’s sell the idea that Chicago, one of the largest and economically ailing cities in America, is equipped to hemorrhage it’s thin wallet. It costs $5 billion to host the games. It most likely will be much more in the end.

Teens are dying in the president’s adopted city and jobs are declining. Health care and war continues to be left by the wayside, but the Olympics, well they seem to be the top priority.

Chicago…ahhhmm I mean the United States is spending $100 million dollars for the bid alone. That money can go to public transit, crippled businesses and social and police programs to combat the astronomical crime rate that has plagued Chicago this past year. If you haven’t heard, 36 public school students have been killed this year. It is a frightening trend that has hit Chicago.

This menacing rate of violence has made national headlines. And, yes it has been brought to Obama’s attention.  He is sending Attorney General Eric Holder and Education Secretary Arne Duncan to Chicago in the wake of the violence.

So Obama, the most famous person on the planet, has made it quite easy to be in many places in such a short time, but not this time. Barack and Michelle Obama should instead take the time to visit Chicago more often and give it the boost of morale that he has given to the rest of the country, although that morale is slowly becoming a redundant press release.

I am really starting to get furious with our president and his knack for meaningless campaigning. What the hell is going on in our country? Does anyone really know? The only ones that challenge him are members of the GOP, and they are the ones that got us into this mess in the first place. Thanks Obama for the rhetoric and smiles. I would rather have you as a talk-show host or motivational speaker, not the commander in chief. If you were the former at least you would be doing a good job.

If there was ever a time that Chicago could use a visit from their hero, their beacon of hope and perseverance, it would be now. But no, he decided to go to Copenhagen to bid for the unsure possibility that Chicago may host the Olympics.

It must be a real burden for you to have to sacrifice your time for a European vacation.